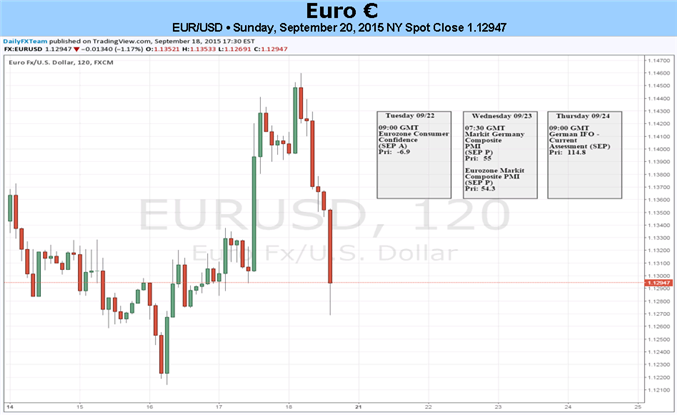 After FOMC Hold, Euro in a Fog as Markets Turn to ECB

- The retail trading crowd has retained a net-short EURUSD position throughout the recent rally.

For EURUSD especially, this week’s lack of upside performance despite the Federal Reserve’s continued charge down the zero interest rate policy (ZIRP) path underscores the dependency market participants have on central bank easing. Now that the Federal Reserve is keeping its ZIRP policy in place amid a backdrop of falling energy prices and ongoing disinflation, traders may now turn to other central banks – mainly the Bank of Japan and the European Central Bank – to make their countermove.

Traders may already have obtained some evidence in recent weeks to think that the ECB could act sometime in the near-future, perhaps at the December or January meetings. At the ECB’s meeting in early-September, the central bank’s policy expectations for growth and inflation over the next three years were revised lower, reflecting one of the concerns the Fed laid out this week when it held its key rate: falling energy prices and their impact on inflation expectations.

In fact, after the Fed’s policy hold, ECB Executive Board member Benoit Couere said that the Fed’s decision to keep rates on hold confirms the ECB’s own dour assessment for global growth. ECB Chief Economist and Executive Board member Peter Praet said last week that the ECB wouldn’t hesitate to act again if it deemed “shocks” to be longer lasting than currently anticipated (which seems possible and likely now that the Fed has held steady).

As the market readjusts to the now-ongoing ZIRP world, traders may be quick to refocus on the ECB’s policies and, if they were to be adjusted, how they might impact various asset classes. An expansion of the current QE’s program’s size and duration, for example, could prove sufficient to reignite the portfolio rebalancing channel that was the dominant theme in bond, equity, and FX markets in the early part of 2015: the ECB’s bond buying pushes down nominal yields while also lifting inflation expectations; and in a yield seeking environment, this pushes capital outside of the Euro-Zone (as domestic investors seek better risk-adjusted returns).

If markets recalibrate and treat the Euro like the funding currency it is, the only hope for EURUSD to run higher is a bout of short covering rally; and there stands good reason to believe that an extended rally in EURUSD would reflexively increase the likelihood of dovish ECB action by the end of the year. –CV