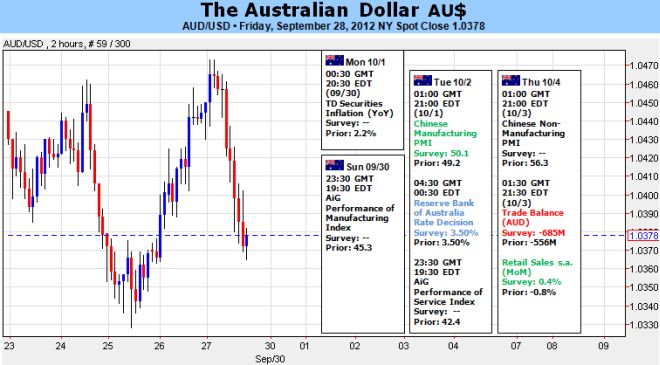 The Australian dollar extended the decline from earlier this month as market participants scaled back their appetite for risk, and the high-yielding currency may track lower going into October should the Reserve Bank of Australia show a greater willingness to ease monetary policy further. Indeed, the RBA interest rate decision on Tuesday highlights the biggest event risk for the aussie, and Governor Glenn Stevens may sound increasingly dovish this time around as the recovery in the $1T economy appears to be losing steam.

A Bloomberg News survey shows 19 of the 28 economists polled anticipate the RBA to keep the benchmark interest rate at 3.50%, while investors are pricing a 66% change for a 25bp rate cut according to Credit Suisse overnight index swaps. Moreover, market participants see borrowing costs falling by at least 100bp over the next 12-months, and we should see the RBA carry its easing cycle into the following year as the fundamental outlook for the region deteriorates. Beyond the rate decision, we’ll also be keeping a close eye on the trade report as it’s expected to show the deficit widening to AUD 685M in August from 556M the month prior, and Governor Stevens may continue to highlight the slowing recovery in China – Australia’s largest trading partner – as the region faces a growing threat for a ‘hard landing.’ As a result, the central bank head may show an increased willingness to further shield the $1T economy from the slowdown in the global growth, and we may see Mr. Stevens strike a more dovish tone for monetary policy in an effort to address the ongoing slack in private sector activity.

As the AUDUSD preserves the downward trend carried over from 2011, we will maintain our bearish forecast going into October, and we will be watching for a break and a close below the 200-Day SMA (1.0340) for confirmation as it appears to be holding up as interim support. Nevertheless, a move below the key figure should open the door for a test of the September low (1.0164), but the AUDUSD should revert back to the 38.2% Fibonacci retracement from the 2010 low to the 2011 high (0.9930) over the near to medium-term as the RBA continues to embark on its easing cycle. - DS