- This week’s economic docket heats up with both data and Central Banker-speak.

- Many key FX markets are at or near interesting areas for turns and trends. EUR/USD sentiment is stretched at -2.12 while GBP/USD reads +1.41. Click here to access IG Client Sentiment.

On Friday, we looked at how this week’s calendar picks up considerably from last week’s quiet outlay, and earlier this morning, my colleague Christopher Vecchio walked through some of the more pivotal high-impact data releases on this week’s docket. These data prints, combined with a few different key Central Banker speeches provide a backdrop with which we can continue to see volatility arise. Stocks began to shake on Thursday of last week, and over the weekend we discussed near-term trajectory across equity indices (also covered in our webinar on Thursday). In this morning’s Market Talk, we’re going to look at price action setups around the U.S. Dollar as we move into what could be a pivotal week for Foreign Exchange markets.

The U.S. Dollar Tests Support, Are Bulls Going to Bring Back the Bids?

Over the past week we’ve been looking for a deeper support check in the U.S. Dollar. After spending the first nine months of the year driving lower, buyers began to show up in the Greenback in latter-September, with price action remaining below a key zone of resistance from 94.08-94.30. When the European Central Bank extended their QE program in late-October, the U.S. Dollar finally broke-above that zone of resistance, eventually setting a fresh high around the 95.00 level. While this was happening, a bit of higher-low short-term support began to show around 94.44, just above that prior zone of resistance. This area held for about two weeks, until we finally saw a quick test on Friday ahead of the close. 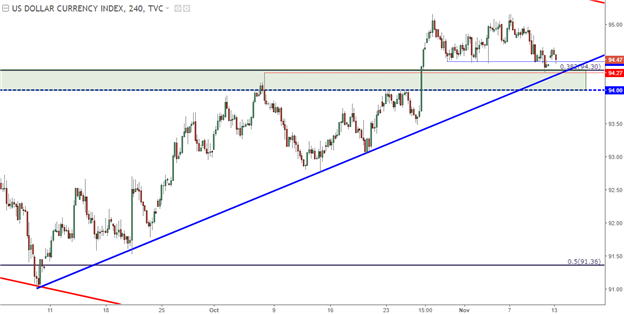 At this point, buyers have pushed prices off of this support zone, but sellers came right back-in below the prior swing-high to push prices-lower. This gives us lower-lows and highs on the hourly chart below, and this could spell a deeper test within this support zone until the bigger-picture bullish trend is ready for resumption. A line of demarcation can be drawn from 94.65-94.75. This is where the previous near-term swing-high had shown up, and if buyers are able to push prices above that level, the prospect of bullish continuation will look considerably more attractive. 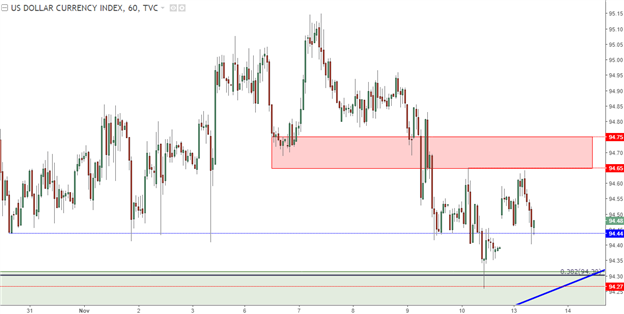 Going along with that support test in the Greenback we have a resistance check in EUR/USD. This was the same zone that had offered resistance in the pair around Non-Farm Payrolls earlier in the month, and this zone had held the lows in EUR/USD for the better part of three months before finally giving way to selling-pressure. 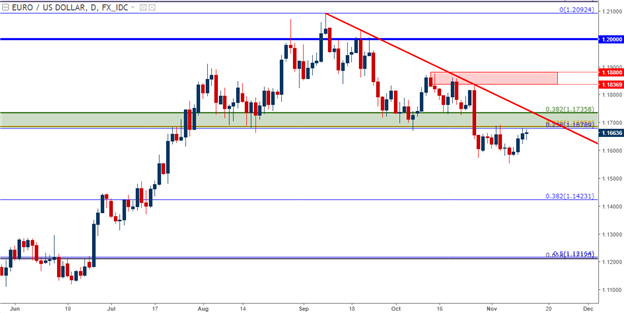 Similar to the U.S. Dollar, we advised that a deeper retracement may be in the cards before the bigger picture trend is ready to resume. In EUR/USD, this could mean a retracement that runs into the 1.18’s before resumption setups become attractive again. The prior group of swing-highs on the Daily chart comes from an area that runs from 1.1837-1.1880, and as long as fresh resistance shows below this area, down-side continuation can remain as favored. 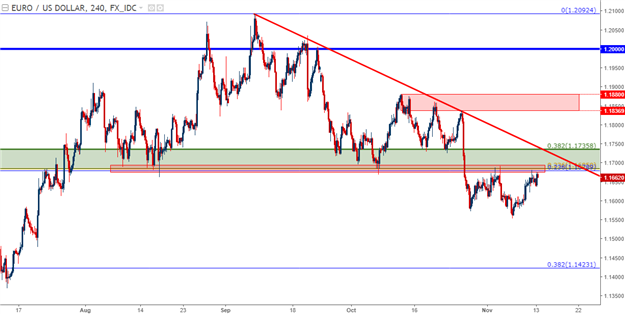 Over the past few weeks we’ve been calling Cable a mess… and this definition carries both technical and fundamental connotations at the present. Last week, we’d shared that the one potential setup that may prove as attractive in the near-term was a resistance check off of the 1.3216 Fibonacci level. This price gave a quick dash of resistance ahead of last week’s close, and prices gapped-lower to begin trading this week. 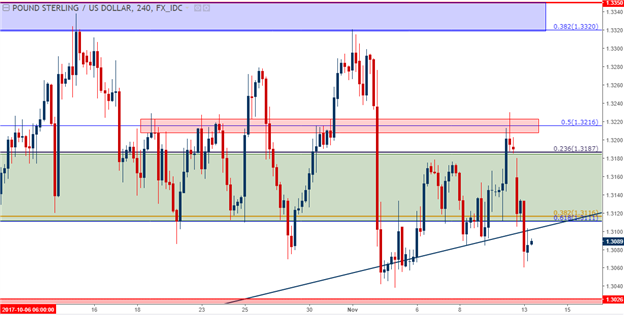 In the process of that opening sell-off prices in GBP/USD fell-below a key trend-line. This bullish trend-line can be found by connecting the March low to the August low; and the area around this trend-line had helped Cable to find support after the BoE’s rate decision earlier in the month. Nonetheless, traders should still move-forward on the pair with extreme caution. A down-side break below the zone that runs from 1.2982-1.3026 opens the door for a continuation of short-side price action. 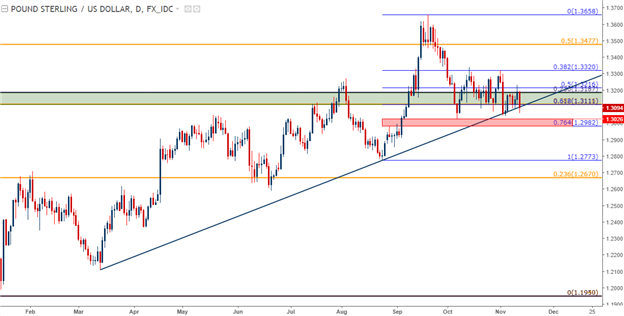 USD/JPY just spent three weeks trying to break out of resistance. This is the area that’s held the highs in the pair for the past six months, running around the 23.6% retracement of the June-December, 2016 bullish run. This area had helped to turn-around prices in May and again in July, and when a third reversal began to show, the prospect of a deeper retracement began to look likely. 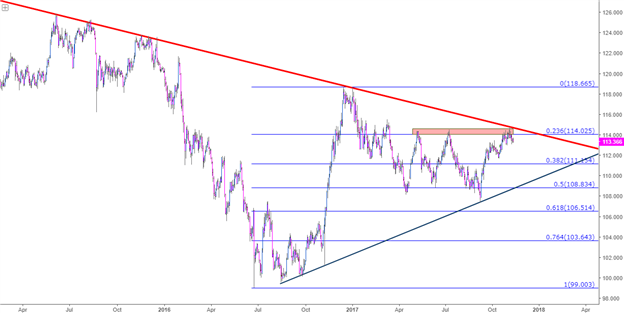 At this stage, near-term support around 113.00 is holding the lows, but as we can see from the hourly chart below, sellers haven’t exactly let-up yet, and we may see prices drive a bit deeper before longer-term support shows. For such an observation, there is a key area of potential support just below current prices that could be interesting for such a push. This area runs from 111.61-112.43, and this zone had helped to set multiple points of support/resistance throughout this summer’s price action. A revisit here coupled with a return of buyers/support can open the door for top-side approaches. 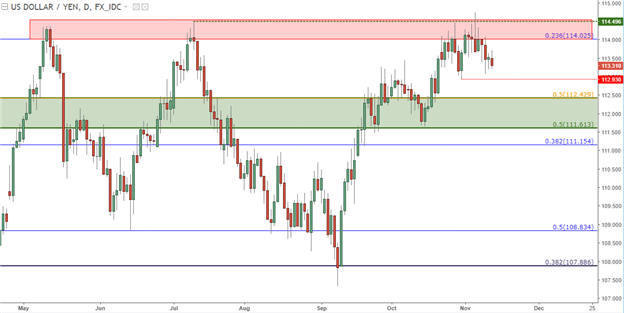