- The U.S. Dollar continues to show strength after last week’s NFP report brought upon a quick support test in DXY.

The U.S. Dollar has opened the week on a bullish note, continuing the theme that began to show in the week prior after the European Central Bank extended their QE program. Much of last week saw price action in the Greenback grinding around higher-low support. That area of support was again tested on Friday after Non-Farm Payrolls came-in below expectations. But, as we’d seen throughout the week, buyers stepped-in around 94.40-94.50; keeping the door open to an extension of USD-strength as we move deeper into Q4. 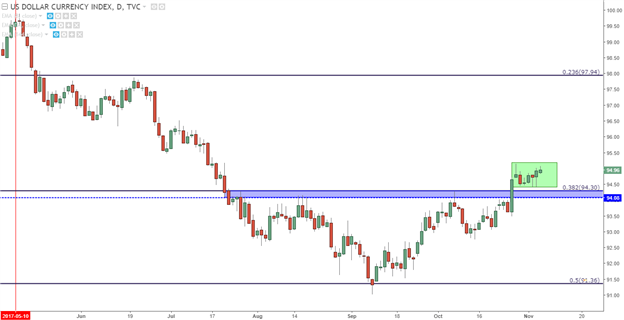 At this point, we’re near the three-month highs in the Dollar shortly after a Monday open. This isn’t usually the best time to try to chase new trends. Instead, traders can let price action in the U.S. Dollar develop further before assigning any directional prognostications for longer-term strategies. As we discussed last week, the Dollar could potentially move-lower while still retaining this bullish stance. On the chart below, we’re looking at a bullish trend-line that’s showed up in DXY since the September low came into play, and we’ve drawn a blue box around the prior zone of resistance that, at this point, has not yet been tested as support. Bulls have simply been unwilling to let prices trickle back down into this zone as of yet, as that higher-low support has showed about .10 above the top-end of the prior resistance zone.

DXY Four-Hour: Bulls Get Shy at 95.00; Support Shows Above Prior Resistance Zone 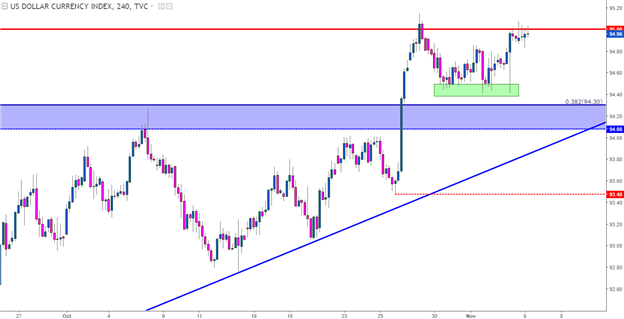 What this means: We may see a slightly deeper retracement in DXY, breaking through last week’s support at 94.40, while bullish positions remain as attractive. Traders looking to work with that theme can investigate stop-losses below the prior swing low, around 93.48, in the effort of trading top-side bullish continuation.

DXY Eight-Hour: Prior Resistance Zone, Inverted H&S Neckline Yet to Be Tested as Support 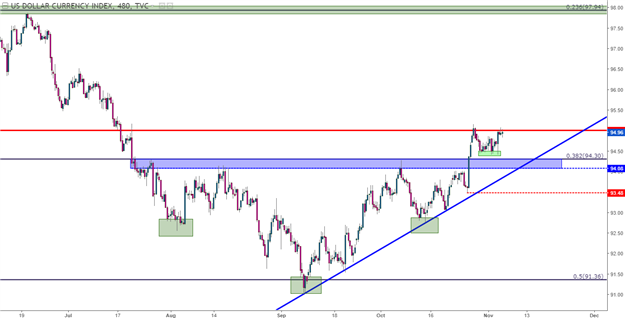 On the long side of the U.S. Dollar, the market that’s probably getting the most attention is EUR/USD, which was one of the major catalysts to the bullish USD breakout from two weeks ago. As the European Central Bank extended their QE program, disappointing expectations for an announcement of taper or stimulus exit, sellers engulfed the Euro and have continued to drive prices since. 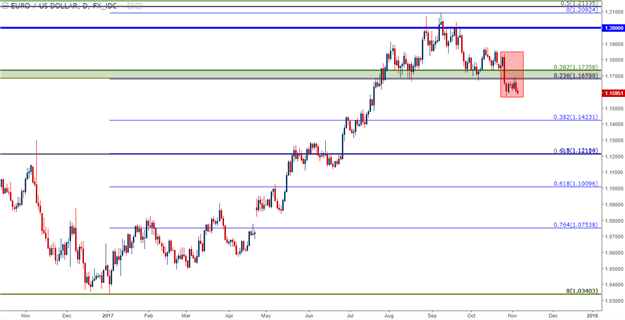 On last Friday’s NFP print, EUR/USD checked the under-side of a prior zone of support before sellers took-over. As we open into this week, EUR/USD is in the process of testing the three month lows; and as we looked at earlier in USD, this is an inopportune time to try to chase new trends. This leaves traders looking to jump on the short-side of EUR/USD with a couple of options. Traders can let prices break-lower, eyeing the 1.1500 level, at which point current support around 1.1572 can be utilized as ‘lower-high’ resistance for down-side continuation, with stops appropriated above the previous swing of 1.1625. 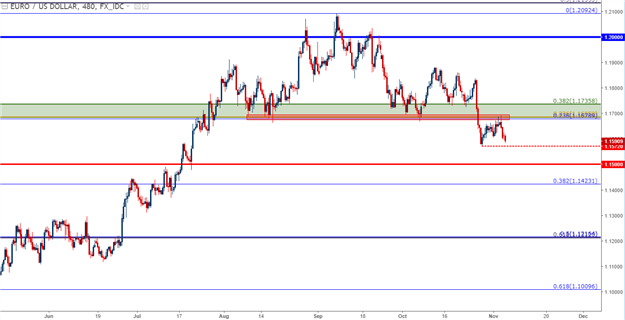 Alternatively, traders can look for prices to resist at a shorter-term element of prior support/new resistance in the effort of controlling risk for short-side continuation strategies. On the below hourly chart, we’re looking at a level around 1.1625 that can be utilized for such a purpose. 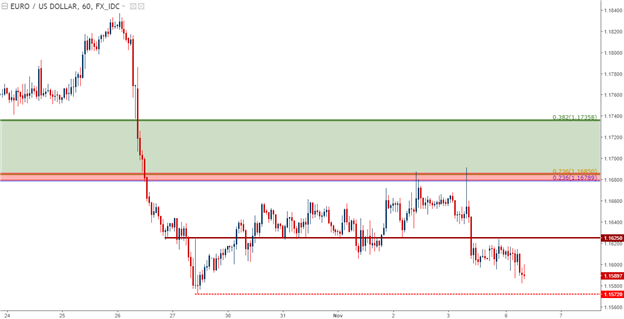 Another area of interest around USD-continuation can be seen against the Japanese Yen. USD/JPY has spent most of the past five months in a range-bound fashion, with multiple bearish reversals off of the ¥114.00 area. Price action first re-encountered this area with around a week left in October; and since then bulls have continually tried to push the pair-higher. 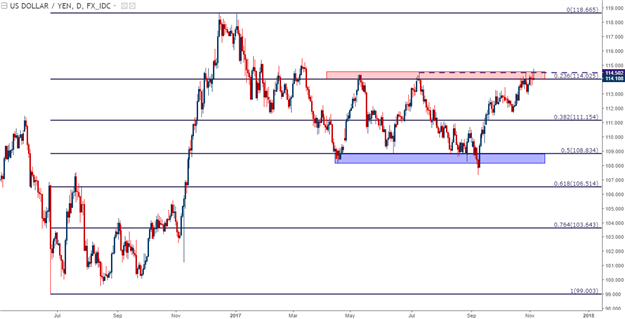 We got another drive-higher on the Sunday open, with prices moving up to set a fresh seven-and-a-half month high. But bulls were unable to continue driving the move on the early open of the week, and prices have settled-lower, right around that 114.00 area. This false breakout should, at the very least, give bulls pause for plotting continuation in present conditions. Instead, traders can look for a test of resistance at the psychological level of 115.00 to open the door for support plays around 114.50 or, alternatively, look for a move towards 113.00 to open the door for another re-test of the 114.00 area. 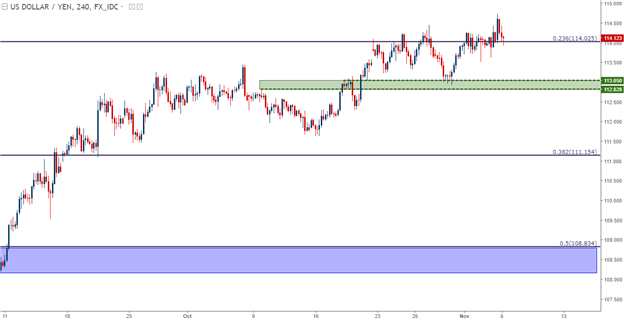