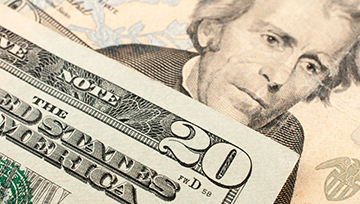 How Forex Markets Might Respond to a Continuation of USD Strength

- The U.S. Dollar is testing three-month highs as bulls remain persistent on the bid. Should this theme continue to develop, a series of interesting possibilities are opened up for the remainder of this year.

- EUR/USD Sentiment remains elevated at -1.84, and GBP/USD is on the other side of the Dollar at +1.19. Click here to access IG Client Sentiment.

In yesterday’s article, we looked at how a persistently bullish U.S. Dollar appears to be on the cusp of a longer-term bullish run. And the juncture that we presently find ourselves at really just highlights how extraordinary the year of 2017 has been. When we came into the year, the U.S. Dollar was surging while at 14-year highs, prodded by the ‘Trump Trade’ that was simultaneously driving both bond and stock markets higher. This is also when EUR/USD was a few hundred pips from parity, a level that was called by many shops as the expectation was for the Euro to just keep creeping-lower as the ECB remained dovish and passive.

But a lot has changed since January 1st, as the U.S. Dollar went on to lose as much as -12.3% of its value while the Euro spent most of the first nine months of the year trending-higher. This theme was very much being driven by the prospect of a stimulus exit or, at the very least, a taper from the ECB. On October 26th, we heard that the bank is extending their QE program to September of next year while also planning to keep rates at present levels for the foreseeable future. This effectively kicked the can on the prospect of stimulus exit from the ECB, and this nullifies one of the major drivers to the Euro’s prior bullish trend.

The big question at this point is how low EUR/USD might go? It’s widely expected that the Fed is going to hike in December and the bank continues to say that they’re looking at three more hikes for 2018. This is over a period in which the ECB is planning no such tweaks to monetary policy, and this can produce a backdrop that allows for a continuation of USD-strength and Euro-weakness as those prior trends come a bit more undone as we move towards the end of the year. 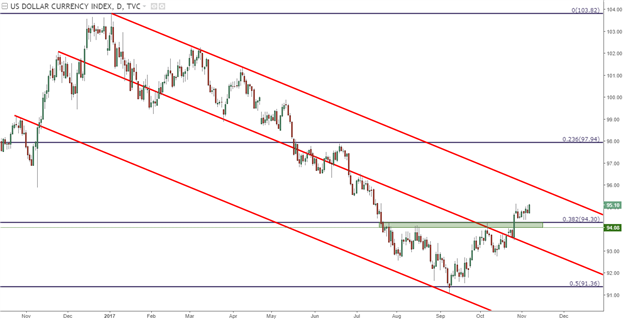 As we mentioned earlier, the Euro has spent most of the year trending-higher under the expectation that the ECB would tighten policy at some point. And the ECB, for the most part, has remained dovish and passive. Throughout the year, the bank has continued to say that they weren’t yet ready to discuss stimulus exit. Markets, nonetheless, continued to price-in the prospect of an eventual exit, or at the very least a taper. At successive meetings in April, June, July and August; ECB President Mario Draghi continually said that the ECB hadn’t even discussed the idea of exiting from stimulus. When we finally got to October, and when the ECB announced that they were extending their program out to September of next year – that prior theme was nullified and weakness has begun to show in the single currency.

That bearish formation has continued to build in the week-and-a-half since the ECB. Friday saw price action in EUR/USD confirm a lower-high off the under-side of a key support zone that we’ve been following; and this morning has brought a fresh three-month-low to the pair. This gives us an extension of lower-lows and lower-highs that can keep the door opened for short-side setups in the pair. 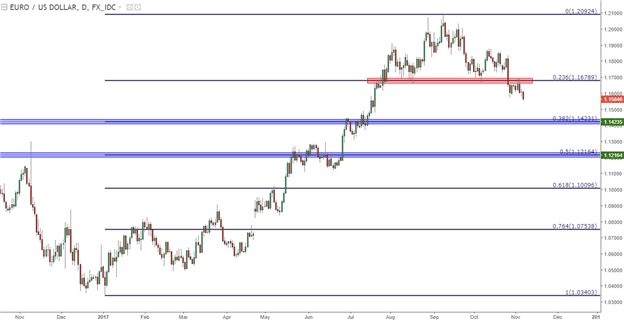 The area of interest in EUR/USD appears to revolve around the 1.1212 level. This is a confluent level that had played a key role in the EUR/USD range that lasted for two-and-a-half years (from January of 2015 until July of this year). At 1.1212, we have the 61.8% retracement of the lifetime move in EUR/USD, taking the low from the year 2000 up to the 2008 high; and at 1.1216 we have the 50% retracement of the 2017 bullish move. Meaning; prices can correct down to 1.1212 while still retaining longer-term bullish potential in EUR/USD; and for near-term short-side strategies, this could be an interesting final target for a short-side setup. 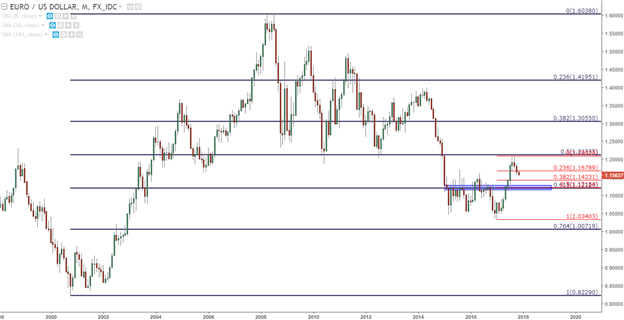 Underneath current price action but above that 1.1200 area are a series of potential supports that can be utilized as short-side targets. We include those on the below EUR/USD chart. 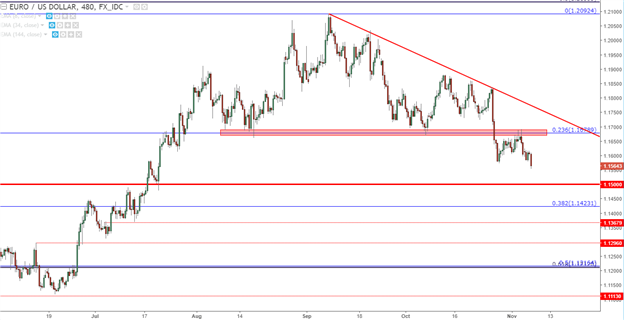 While the Euro has spent most of the year raging-higher, the Japanese Yen has been, for the most part, fairly weak. A really weak U.S. Dollar offset that Yen weakness for a large chunk of this year, and at this point, USD/JPY continues to resist at the area that has held the pair’s gains for the past six months. 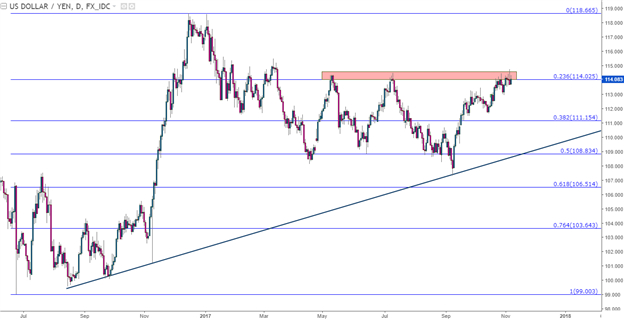 This is not the only element of resistance that USD/JPY is currently facing: We’re also at the top-end of a long-term symmetrical wedge formation as we look at on the weekly USD/JPY chart below: 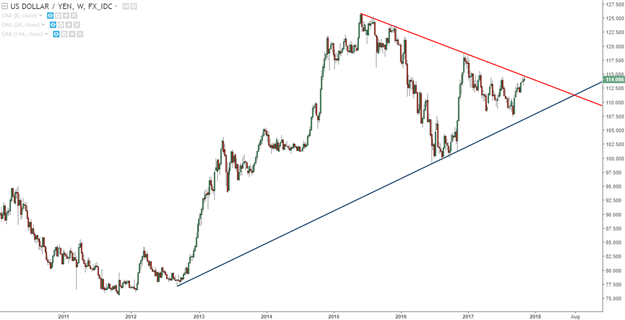 If USD/JPY is able to finally break-through this months’ worth of resistance, the 115.00 psychological level is nearby, but a break though that area opens the door for a challenge of the 2017 high around 118.50. If we’re able to take out that level, then the psychological level of 120.00 becomes interesting for top-side targets. 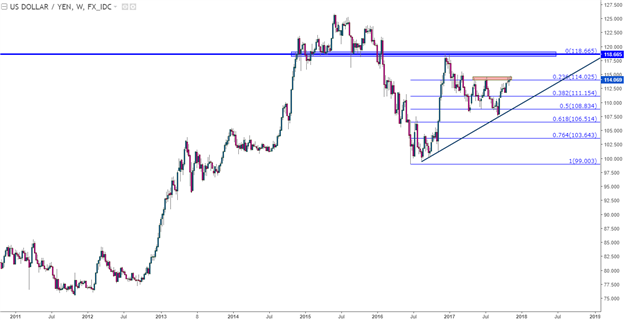 Cable is a bit messier at the moment, as has been the case from even before the Bank of England’s dovish rate hike from last week. If we do see USD-strength heat up as a theme, GBP/USD could break back-below the 1.3000 psychological level on what could, potentially, be an extended run in the pair.

Similar to the ECB meeting from two weeks ago, the Bank of England extinguished hopes for a longer-term shift with rate setting policy. While the BoE had been talking about last week’s rate hike since August, Mr. Carney has also said that rate hikes will be gradual and slow, alluding to this move as a ‘one and done’ type of hike. This is largely the reason that the British Pound has put-in weakness since that tightening, and should the BoE remain dovish, as they have throughout the period since Brexit even when hiking rates; this can make for a vulnerable backdrop in the British Pound as higher rates get priced-in to the U.S. Dollar.

We looked into the technical setup around GBP/USD in yesterday’s article entitled, The Cable Congestion Continues. Basically - price action in Cable is a mess right now, with mean reversion being the name of the game over the past month, even when getting a rate hike from the BoE. This can make directional prognosis fairly complicated at the moment, and traders looking to trade a directional move would likely want to wait for the current sloppy price action to resolve before looking to assign a trending bias. On the weekly chart below, we’re looking at another symmetrical wedge pattern; but this time prices are testing the support side of the setup. 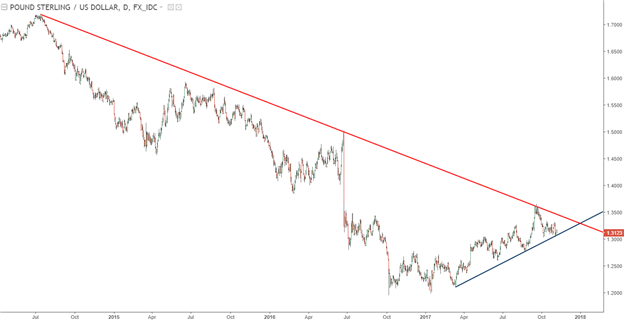 Under the scenario of USD-strength, this would be looking for a break-below the 1.3000 psychological level to open the door to short-side positioning in the pair. And to take this a step further, there is a Fibonacci level around 1.2982 that can be incorporated with the October swing-low to produce a support zone in the pair.

A break below this zone opens the door for short-side strategies, and on the chart below, we’ve included subordinated support points that can be interesting for down-side targets should this theme continue to develop. 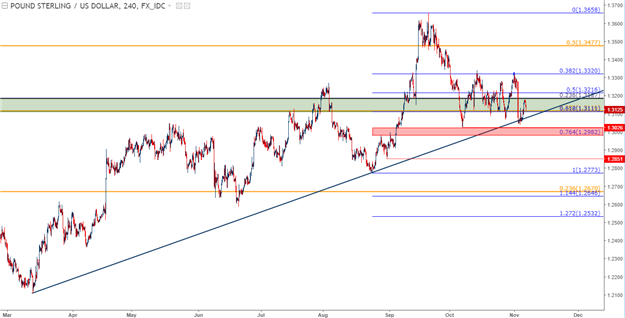