- The British Pound continues to oscillate within the range that had been set weeks ahead of the BoE’s rate hike.

- Sentiment is beginning to get stretched in GBP/USD, with 1.55 traders long for every one short. Click here to access our IG Client Sentiment Indicator.

In our last article, we looked at the British Pound after a tumultuous prior month, and the root of this story really can be driven back to August. This is when BoE Governor Mark Carney warned that rate hikes may be on the horizon as inflation in the U.K. continued at a rather brisk pace; and this seemingly opened the door to a theme that markets have been building anticipation around since the Brexit referendum. Going into Brexit, the ‘sharp repricing’ in the value of the British Pound was widely expected should voters elect to leave the EU. We were even warned of as such by Mr. Carney himself; but the big question that remained after that sharp repricing showed up after the referendum was just how quickly prices might respond to begin showing stronger forces of inflation after the 20%+ hit to the currency.

Throughout this year, inflation has continued to run-higher in the U.K., with annualized inflation eclipsing the psychological 3% marker in September. This has been somewhat of a growing theme throughout the year, as inflation has steadily continued well-beyond the BoE’s 2% target. When Mr. Carney mentioned in mid-August that rate hikes might be on the horizon as an answer to that rising inflation, the British Pound exploded to set a fresh yearly high at 1.3658 (shown below in blue). But as price action was attempting to dig-out higher-low support around 1.3500, Mr. Carney’s continued remarks erred on the dovish side; and this helped to dampen the enthusiasm that had sprung in the month prior (the retracement is shown in red below). 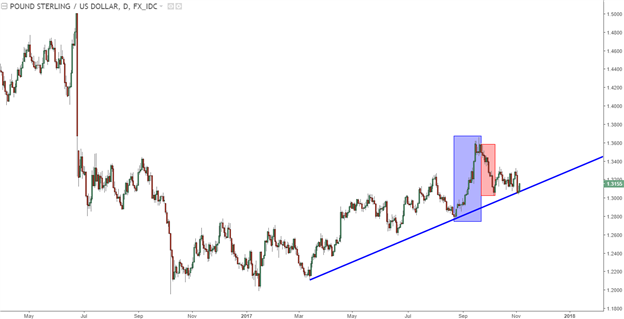 Buyers eventually stepped-in just above the 1.3000 psychological level, but as we warned, price action was extremely messy – and traders would likely want to wait for a break of support or resistance before assigning a directional bias to the pair. The area of resistance that we’re following runs from 1.3320-1.3350, and this is around the 38.2% retracement of that recent bullish move. The support side that we’ve been watching runs from the 76.4% retracement of that same move up to the October swing-low at 1.3025.

GBP/USD Four-Hour: Mean Reversion Over the Past Month 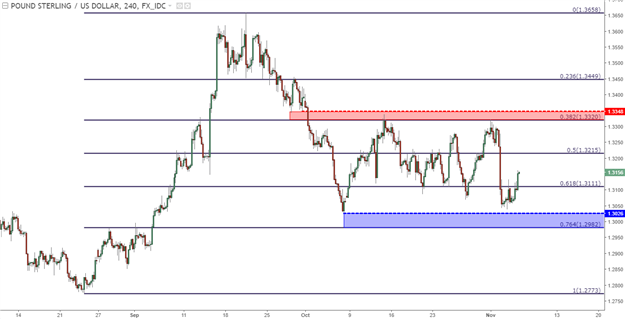 After coming into last week’s BoE rate decision after having resisted at 1.3320 the day before, sellers took over as Mark Carney and the Bank of England hiked rates. While rate hikes, generally, will have a tendency to drive demand into a currency, one can surmise that last week’s rate hike was more than adequately priced-in to the British Pound, and the accompanying dovish tone from the Bank did little to build encouragement around further hawkishness at the BoE. In the immediate period after that rate hike, and throughout Mr. Carney’s accompanying press conference, the British Pound continued to sell-off towards that prior swing-low set in October.

Buyers stepped-in before that support could get taken-out, and this leaves GBP/USD price action in a continued messy state in which directional prognostications can be difficult to gleam. Traders looking at longer-term positional strategies can continue to watch for breaks above resistance (1.3320-1.3350) or below support (1.2982-1.3026).

For shorter-term strategies or for those that do not want to wait, the level of 1.3216 could be interesting as potential resistance for short-side continuation. This is the 50% retracement of the same Fibonacci study taking the August low up to the October high. This level had previously given a brief iteration of resistance; and if GBP/USD does begin to find sellers here, the door can be opened for short-side exposure with stops above the batch of range resistance that runs from 1.3320-1.3350. 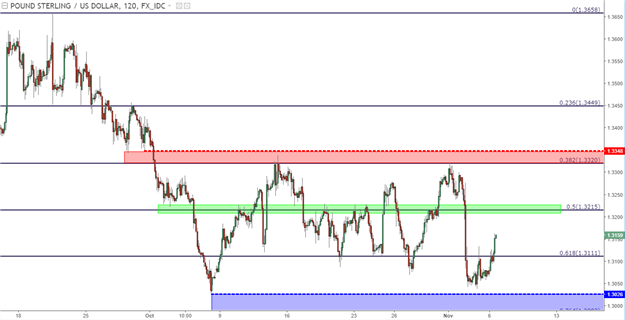