U.S. Dollar Holds on To Gains Ahead of FOMC

- Today at 2PM ET brings a FOMC rate decision, and while no moves are expected, markets are looking for a hike in December and will be looking to gleam clues from this afternoon’s statement.

- Also of interest: Tomorrow brings a Bank of England meeting with an expected rate hike, while we’re also looking to hear of President Trump’s nomination for FOMC Chair along with the ‘big reveal’ of the tax bill.

- Want to see how USD has held up to our DailyFX Q4 Forecast? Click here for full access.

Today at 2PM ET brings a Federal Reserve rate decision. Expectations are low for anything new, as markets are expecting the bank to adjust rates at their next meeting in December. There are no accompanying economic projections or press conferences, as those are also waiting in the wings for the December meeting, so today’s meeting will be all about the statement to be released right at 2pm. There are some other drivers to contend with, however, as President Trump’s announcement of his nomination to head the bank is expected tomorrow morning, and we have the big reveal of the tax bill also on the docket for tomorrow. So, the U.S. Dollar can remain volatile in the near-term as driven by this series of drivers, even outside of the expected no-move rate decision on the calendar for later today.

As we walk into today’s rate decision, the U.S. Dollar is continuing to hold on to recent gains. Last week saw a top-side break of a key zone of resistance that had held the highs in USD for over three months. As the European Central Bank extended their stimulus program, EUR/USD broke through a key zone of support and the corresponding move in the Greenback saw the Dollar lift to fresh three-month highs. 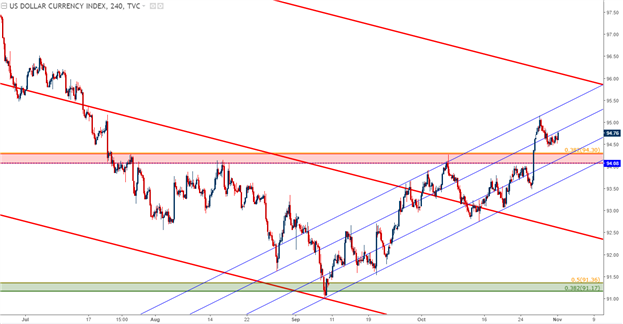 At this stage, DXY appears to be trying to carve out a higher-low around 94.50 as buyers have come-in to show support above prior points of resistance. Realistically, that point of support could drive a bit-lower while the U.S. Dollar retains longer-term, bullish continuation potential; and this gives us two potential areas to watch for support to develop with the aim of topside continuation in DXY. 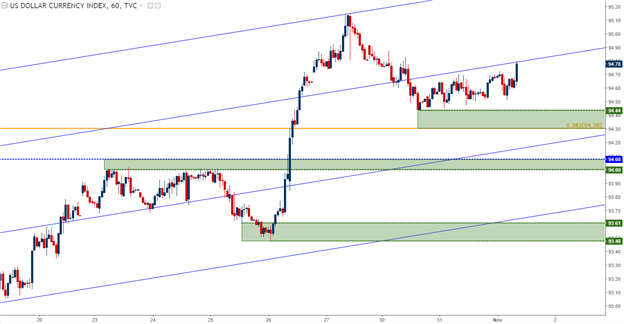 For long-USD approaches, we’ve been following AUD/USD. While this may not have had the shine of EUR/USD during last week’s ECB rate decision, Aussie had put in prior leanings of bearish price action, giving the appearance of accommodation should the long-USD trade begin to heat up. As that happened last week, AUD/USD broke through support structure, and at this stage we have support showing around .7625 after lower-high resistance showed around .7000. For traders looking at long-USD continuation, AUD/USD can remain attractive as the pair moves towards the big figure of .7500. 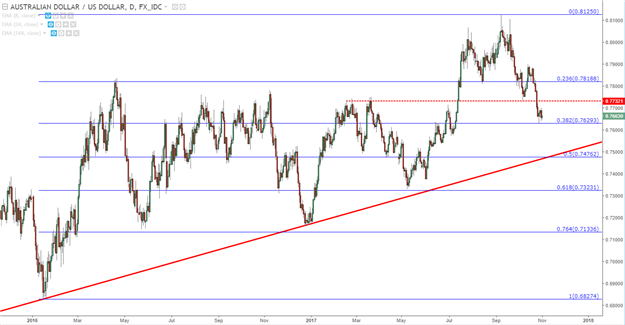 While USD-strength was all the rage last week, there was one pair that was noticeably absent at the party, and that was USD/JPY. USD/JPY put in a brisk top-side gain well-ahead of last week, and this was driven by the combination of an uber-dovish Bank of Japan along with Japanese elections from a couple of weeks ago. But this sent USD/JPY headstrong into a key area of resistance around 114.00 that, still, has yet to give way.

USD/JPY has been range-bound for over five months now, and the price of 114.03 is a key Fibonacci level, as this is the 23.6% retracement of major move that took place from last June to last December. After prices reversed here in early-May, this area turned-around another bullish advance in July. As prices were creeping towards that zone last week, we pointed out how rigid that resistance has been thus far and, since then, prices have remained subdued below this zone. 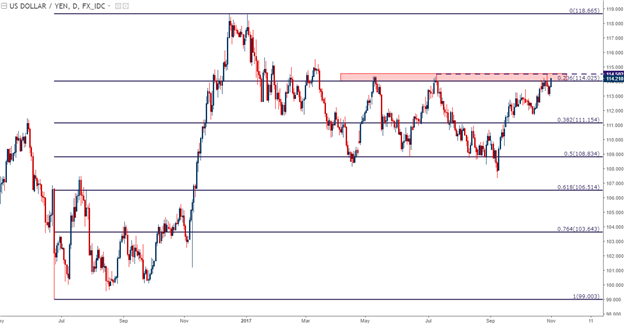 One area for Dollar bulls to remain cautious is around the British Pound. The Bank of England is expected to hike rates at their rate decision tomorrow and ahead of the meeting, the British Pound has caught a bid after a nice bump to manufacturing PMI for the month of October. But – longer-term price action in GBP/USD remains messy, and as we looked at last week, traders would likely want some evidence of a directional move before looking to assign any type of trending biases.

Prices in GBP/USD are currently finding sellers underneath the resistance zone that we had previously looked at, comprising the area of 1.3320-1.3350. The price of 1.3320 is the 61.8% retracement of the bullish move that showed-up in mid-August, and this area had helped to turn-around a bullish advance earlier in October. If we do get a topside break of this zone, another area of resistance runs from 1.3449-1.3477; and if this gets taken-out, the next area of potential resistance comes-in at 1.3600-1.3650.

GBP/USD Four-Hour: At Range, Fibonacci Resistance Ahead of BoE 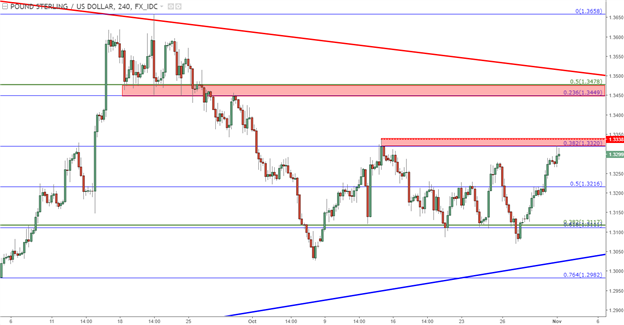