GBP/USD Technical Analysis: Will Inflation Force a Hawkish Tilt at the BoE?

- The British Pound remains strong after the Morning Star formation that printed two weeks ago. U.K. inflation for the month of August is released tomorrow, and Thursday brings a BoE rate decision.

- With the recent bout of GBP strength we’ve seen a rise in retail sellers. IG Client Sentiment sits at -2.25 as of this writing, and given retail trader’s traditional contrarian nature, this is bullish for the pair.

- Want to see how GBP and USD have held up to our DailyFX Forecasts? Click here for full access.

In our last article, we looked at a potential bullish reversal in GBP/USD after the pair printed a morning star formation on the Daily chart. With that morning star showing up around the Jackson Hole Economic Symposium as the U.S. Dollar extended it’s 2017 down-trend, there were setups on both sides of the pair. But as prices ascended through the 1.2929-level, bullish exposure became more attractive as that previous bearish trend gave way to higher prices.

The previous bearish trend began after the BoE’s Super Thursday event in early August. After coming into the month flying high on the basis of stronger inflation potentially pushing the BoE away from their uber-dovish monetary stance, the pair reversed as the bank showed little concern around these higher levels of inflation. At the rate decision in early August, the BoE cut growth forecasts while expecting inflation to remain above target in the near-term. This highlights the persistent dovish posture that we’ve seen out of the Bank of England post-Brexit, as Mark Carney has appeared rather unexcited by stronger inflation that doesn’t include wage growth. The inflation report that came out a couple of weeks later didn’t help matters, as the 2.6% annualized print was below the expectation of 2.7%, and this furthered the sell-off in Cable as we walked into the Jackson Hole Economic Symposium.

Around Fed Chair Janet Yellen’s speech at Jackson Hole, the U.S. Dollar started selling-off again, and this helped to form support in Cable around a point of prior resistance at 1.2775, leading to the morning star formation discussed in our last article, and prices have been surging higher ever since, including a topside break of the key Fibonacci level at 1.3117.

The key driver here is inflation, as we discussed in Market Talk earlier this morning. Inflation in the U.K. saw a sharp rise after the post-Brexit accommodation from the BoE, jumping well-above the bank’s own 2% target in February of this year. Inflation for the month of May got as high as 2.9%, and this brought upon three dissenting votes from the Bank of England. Ms. Forbes, the most prominent dissenter, left the bank shortly after that vote, so there was a very big question as to just how hawkish the BoE might be in the future. Inflation softened in June and July, coming in at 2.6% each; and that last rate decision in early August only saw two dissenting votes from the MPC, reiterating the thesis that the Bank of England was in no hurry to hike rates.

U.K. Inflation Remains Well-Above the BoE’s Target, but What Are They Going to Do About It? 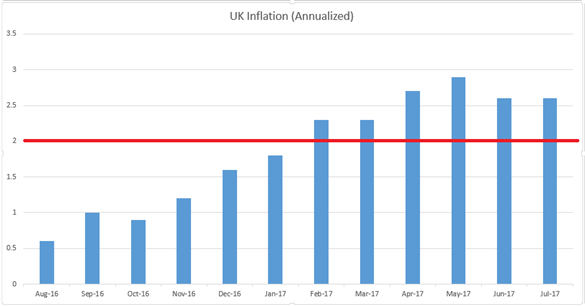 Since that support inflection around the Jackson Hole Economic Symposium, bulls have begun to take over in GBP. This is very similar to what was seen in August, when buyers drove the currency higher leading into the rate decision under the presumption that higher levels of inflation might force the BoE away from their uber-accommodative monetary stance. Will this be the month that the BoE finally capitulates? Probably not, but as traders we have to retain vigilance on either side of the matter.

For GBP-weakness plays, traders may want to look away from the U.S. Dollar. The back-breaking down-trend in the U.S. Dollar could add complication to such strategies, and in order to sell GBP, traders may be better served by matching up what could be a weak British Pound with a currency that has recently displayed some element of strength, such as the Euro. EUR/GBP is closing in on what could be a very interesting level for such strategies around the .9000-area on the pair.

For GBP-strength, traders will likely want to exercise some patience here. One potential option is looking for higher-low support around 1.3117 in GBP/USD. The key to such an approach will be confirming that support is actually showing at the level, rather than buying on the first print below. But if this doesn’t show up, traders may have to contend with a short-term breakout. To approach such a scenario, traders can first let this batch of resistance around 1.3250 give way before plotting longer-term bullish approaches. Just above this resistance is a potentially huge zone around 1.3500, which has some historic implications for the pair. This level had helped to set the ‘Financial Collapse’ low for more than seven years (until Brexit came into the equation), and just 22 pips below we have the 50% retracement of the ‘Brexit move’ in GBP/USD. This could be an idea level to look for a near-term higher-high to prelude a higher-low support entry. Higher low support at 1.3350 or 1.3250 could be accommodative for longer-term bullish exposure in GBP.