USD/CAD Price Outlook Ahead of Bank of Canada Rate Decision

The September BOC meeting is expected to reveal no change to the central bank’s benchmark interest rate, which currently stands at 1.75%. Looking further out, however, we see the Bank of Canada rate cut probability grows exponentially to a 75% chance by its December meeting according to overnight swaps pricing. That said, Canadian Dollar price action will likely respond to details found within the BOC’s updated monetary policy statement and accompanying commentary from Governor Poloz. 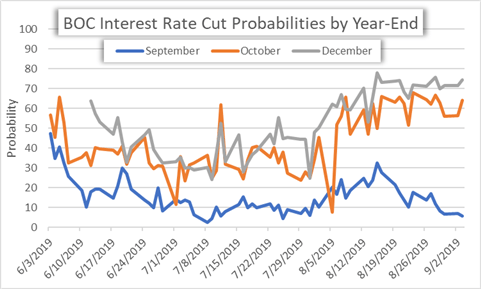 Most prominently, markets will likely look for any signs of a shift in the BOC’s policy stance toward a more dovish tone in lieu of its current relatively hawkish position. The heavy weight currency traders are placing on the September BOC meeting could be explained by recent economic data painting a mixed depiction of the Canadian economy, which has made the market’s expectations of future BOC monetary policy decisions increasingly ambiguous. Consequently, the loonie has whipsawed around looming event risk despite technicals suggesting the Canadian Dollar appeared ripe for a breakout. 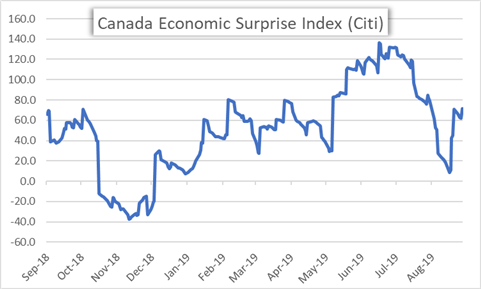 Canadian economic data has improved considerably throughout August according to the Citi economic surprise index, but details behind the headline indicators appear less sanguine. On the bright side, Canadian inflation and retail sales have held up quite well. Conversely, the July jobs data printed a huge miss and could convey signs of weakness emerging across Canada’s labor market. Also, while Q2 Canada GDP data came in better than expected, looking “under the hood” of the report uncovered a notable drop in business investment and uninspiring slowdown in household spending.

As such, Canadian Dollar overnight implied volatility has jumped ahead of the September BOC meeting with the readings on USDCAD, CADJPY, EURCAD, GBPCAD and AUDCAD all above their 12-month averages. GBPCAD is expected to be the most volatile CAD-pair in light of heightened Brexit risk with CADJPY behind as a close second owing to the potential impact BOC monetary policy changes could have on JPY-funded carry trades. 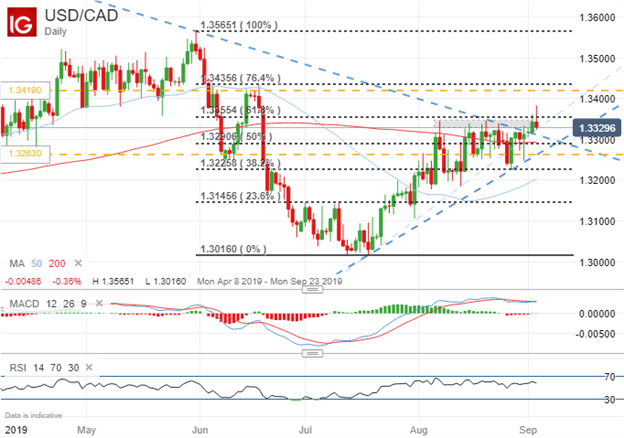 Judging by USDCAD overnight implied volatility of 6.27%, spot prices are estimated to trade between 1.3462-1.3419 with a 68% statistical probability. A dovish shift by the BOC tomorrow, if confirmed, will likely push spot USDCAD toward major confluence around the 1.34 handle and above technical resistance posted by the 61.8% Fibonacci retracement level of its May 31 swing high.

Alternatively, a firm stance reiterated by the Bank of Canada stands to send spot USDCAD whipsawing back lower where prices may find technical support around the 1.3300 area before testing the lower bound of its option-implied trading range. Also, bullish uptrend support extended from the series of higher lows since mid-July could also help keep spot USDCAD afloat going forward. 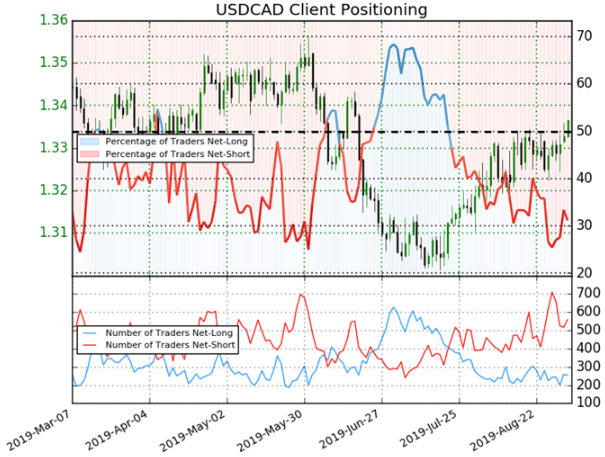 According to IG Client Sentiment data, 31.2% of spot USDCAD retail forex traders are net-long resulting in a short-to-long ratio of -2.21 to 1. Interestingly, traders have remained net-short since Jul 23 when USDCAD traded near 1.30435; price has moved 2.5% higher since then. Also, the number of traders net-long is 12.5% lower from last week whereas the number of net-shorts is 2.8% higher over the same period, which gives our bearish contrarian view to crowd sentiment further credence.