Spot GBPUSD sank over 100 pips from Wednesday’s session high as the Sterling succumbed to the market’s resurfacing fears of no-deal Brexit. The British Pound’s latest move to the downside was sparked by reports that Prime Minister Boris Johnson plans on suspending UK Parliament from early-mid September until October 14; a mere 17 calendar days away from the fast-approaching October 31 Brexit deadline. As things currently stand, no-deal Brexit is the default scenario if the October 31 deadline is reached prior to Parliament backing a new Brexit deal or approving another extension. 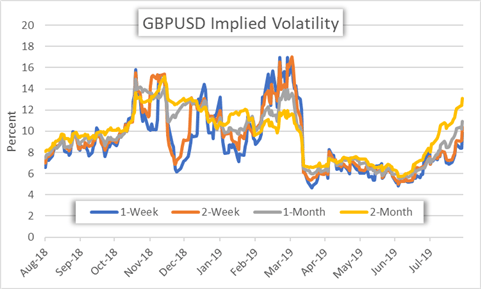 GBPUSD implied volatility – largely quantifying the market’s perception of Brexit uncertainty – depicts the rise of no-deal Brexit risk. That said, GBPUSD 2-month implied volatility, which nearly encompasses the October 31 Brexit departure date, unsurprisingly spiked to 13.09% and marks the highest reading since December 10 when former PM Theresa May canceled Parliament’s original Brexit vote. Also, given the generally strong inverse relationship between an underlying’s implied volatility and its spot price, the British Pound could very well reembark on its steep slide lower as currency traders digest the growing probability that the UK will sever itself from the EU without a Brexit deal. 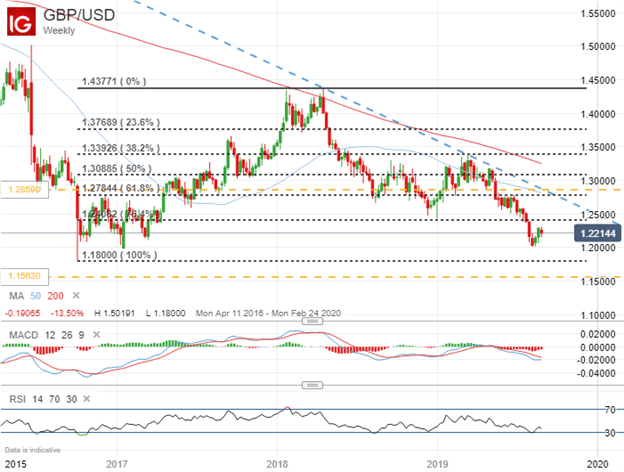 This relationship between the British Pound and its respective measures of implied volatility was last noted in our weekly GBP price forecast earlier this month when we correctly anticipated a technical retracement higher in the Sterling. In light of the latest Brexit developments, however, the prospect of GBPUSD continuing its recent rebound is unlikely. Yet, GBP bulls counter that PM Boris Johnson’s latest move ups the pressure on the EU to make concessions to the Brexit Withdrawal Agreement – specifically regarding the Irish backstop. Nevertheless, spot GBPUSD is estimated to fluctuate between 1.1563-1.2859 with a 68% statistical probability as the Brexit clock ticks down judging by the currency pair’s 2-month implied volatility of 13.09%.