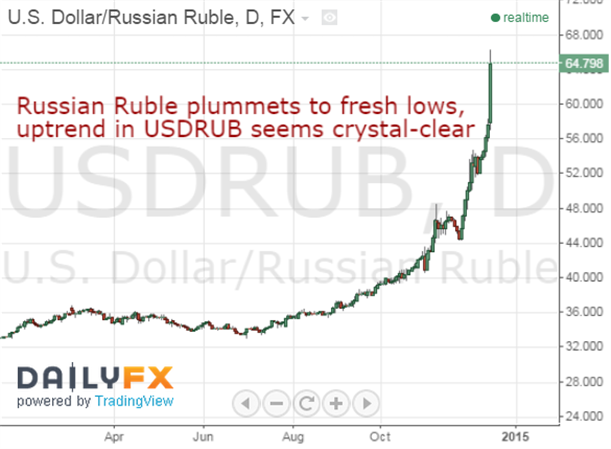 UPDATE: Central bank of Russia raised its short-term interest rate to 17% in a bid to "stem devaluation, inflation risks."

The Russian Ruble continues its plunge versus the US Dollar, and the overall trend is crystal-clear. Yet buying USDRUB seems exceedingly risky. We look to potential alternatives.

We have recently warned that the Russian Ruble looked at increased risk of continued tumbles and that said volatility could force especially large tumbles in key currencies. And indeed official responses to the USDRUB surge has been insufficient to stem losses.

The temptation as traders is clear: we might look to sell into Russian Ruble declines. Yet we highlighted a key reason why traders should avoid holding USDRUB positions in a special report from last month: the risk is that Russian officials will halt Ruble speculation and punish those with open positions.

Why are Capital Controls a Real Danger?

Lessons from Russian debt default of 1998 tell us that a political solution will seek to inflict maximum damage on those speculating on further weakness in Russian financial markets.

If the Central Bank of Russia is unable to stop further USDRUB rallies via interest rate hikes and interventions, we believe that the Russian government will effectively halt speculation on the domestic currency. This may admittedly seem hyperbolic and sensationalist, but already we’ve seen the CBR hike interest rates by 100bps at a time to a massive 10.5 percent and most recently to 17 percent. Near-zero short-term interest rates in the US Dollar and other major currencies should make investors more than happy to receive 10 percent yields. And yet the Ruble rout continues; it will be critical to see how markets react to the massive, unexpected interest rate hike.

If a trader is holding a position in the USD/RUB or any other RUB-based pair, this could mean that trades would be closed at a significantly unfavorable rate—likely causing losses for those on either side of the trade.Russian President Vladimir Putin put it bluntly when he said the CBR should “take measures to make sure that speculators can no longer take advantage [of the Ruble’s depreciation].” As someone who came to power in the aftermath of the 1998 Russian Financial Crisis, Putin is well-aware that more aggressive action may be necessary to stave off substantial political fallout.

Last week we highlighted key reasons that Emerging Markets—and EM currencies—would likely do very poorly if Russia were to default on its debt. The implications seem quite similar if Russian officials were to institute aggressive capital controls. Thus we’ll focus on non-Russian EM FX pairs as a preferred method to speculate on further turmoil. 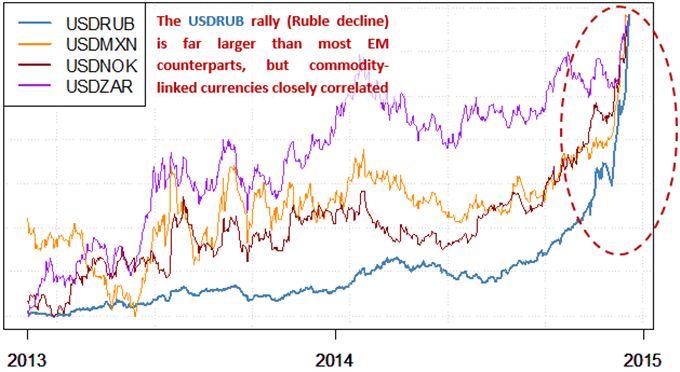 In lieu of holding USDRUB positions we’ll look to pairs such as USDMXN, USDZAR, and even the crude oil-linked USDNOK as a method by which to speculate on continued Ruble declines. And though the Russian currency has clearly fallen further and faster than any of these counterparts, the real financial risks of holding Ruble positions have grown too great as this ongoing crisis sees few signs of slowing.

Could we see a Repeat of 1998? If so, Investors Should Batten Down the Hatches

If we take a fairly conservative view of the current Russian crisis, any future government actions could be fairly limited in scope and their effects will be felt in the Ruble as well as Ruble-denominated assets. Yet as our focus from last week highlights, a further worsening could have substantial knock-on effects not only in Emerging Markets but also in Developed Markets and currencies.

We believe the Euro seems especially at risk on further turmoil given economic links and geographical proximity to Russia—particularly as Western Europe and its allies leave Russia politically isolated. The Russian Crisis of 1998 was at the time the world’s largest sovereign credit default and its effects across broader markets were substantial.

It’s early yet, but investors should proceed with caution on signs that the current crisis could get far worse before it gets better. Keep an eye on the USD/RUB exchange rate, official Russian responses, and further geopolitical rumblings for signs of further danger.