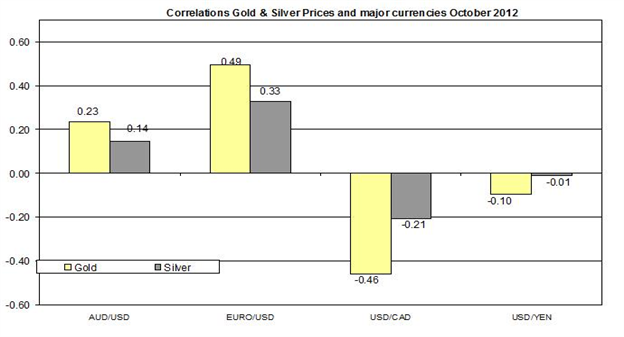 The prices of gold and silver continued their downward trend direction and following yesterday's tumble they have both returned to their pre-FOMC QE3 decision prices. The recent U.S retail sales report was better than many had anticipated as the retails sales rose by 1.1% during September. This news may have lowered the expectations of many bullion traders for another FOMC monetary stimulus that could lower the value of the USD and thus pull up the prices of gold and silver. There are still speculations around the growth of China's economy. Tomorrow's GDP report for Q3 may shed some light on this issue. On today's agenda: Great Britain CPI, German ZEW economic sentiment, BOE Inflation Estimate, U.S Core Consumer Price Index and U.S. TIC Long Term Purchases.

U.S. TIC Long Term Purchases: The Treasury InternationalCapital report will show the shifts in the purchases and sales of US long term treasuries in August 2012. In the previous report regarding July 2012, the net foreign sales of U.S Treasuries longer-term notes reached $67 billion;

The prices of precious metals declined again for second consecutive business day for gold and third consecutive day for silver. Will this downward trend continue? There are concerns around the future growth of China, among the leading economies in importing gold. The recent deprecation of the Indian Rupee may curb the demand for gold in India, the leading country in importing gold. On the other hand, if the U.S will continue to show signs of progress as it did in the recent retail sales, then the chances of another stimulus plan by the FOMC will decline. The upcoming EU Summit is likely to affect not only the forex market, but also commodities prices. Despite yesterday's fall I still guess the prices of gold and silver will resume their rally especially if today's reports regarding U.S core CPI won't rise by a sharp margin. Finally, if the Euro and other "risk currencies" will rally, then they could also pull up precious metals.