On Friday, gold failed again to close above the 2013 trend-line on a weekly basis, putting the general trading bias neutral to bearish. Crude oil is an interesting point in time on the current bounce given market positioning. The DAX is the weakest of the crew of indices we watch.

Gold failed again to hold above the 2013 trend-line, bias neutral to bearish

There was about 12 hours to go before the close of the week and gold was looking to close above the 2013 trend-line before it reversed lower and closed just beneath it (again). The closing candle on a weekly basis above has been our requirement for a valid breakout given the long-term nature of it.

Another failure is leading to weakness, with the trend-line from December as the first line of support in the vicinity of 1330/25. Along with gold, of course, silver is taking a hit too. Given silver’s overall weaker posturing it has been the ‘go-to’ short between the two major precious metals. As long as gold stays below long-term trend-line resistance this will remain the case. 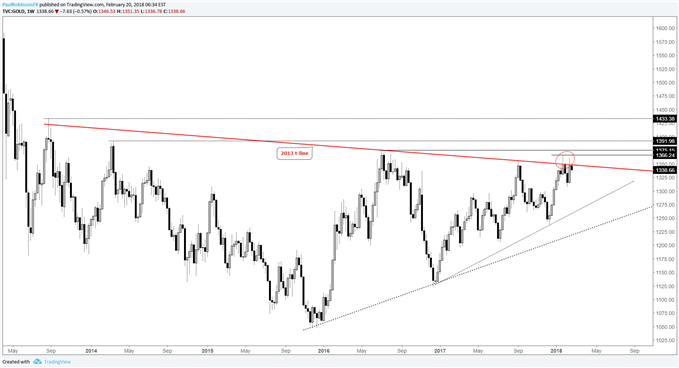 Last week, US crude oil sprung higher from the July slope we’ve been focused on in recent sessions. But the rally could soon be at risk of creating a lower-high from the high created last month. As we discussed yesterday, speculative positioning is at a historical extreme in oil, and at some point all those long positions built up in recent months could start to unwind as gains shrink and losses accumulate.

The July slope is an important threshold given the amount of play it has received over the months; break below and look for the trend off the Jan high to accelerate. But for as long as the slope holds, though, it will remain a source of support.

Is volatility shaking your confidence? Check out this guide, Building Confidence in Trading. 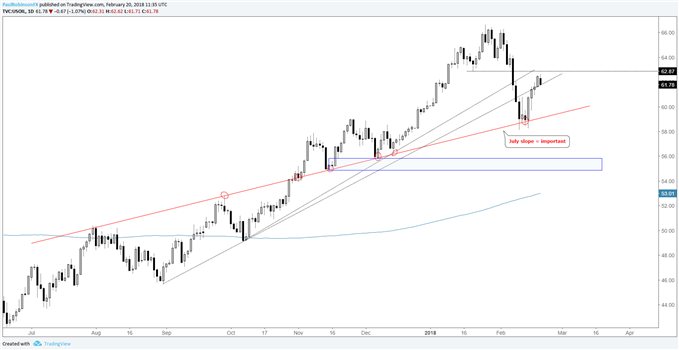 We’ve seen risk recover a bit after the swoon, but the DAX has been the weakest of the bunch. This is likely to remain the case and puts it at risk of trading down to recent lows or worse should risk start to wilt again. The CAC has very clear resistance in the 5280/300-area. The FTSE has clear support/resistance around 7100/7300. The S&P 500 is likely in for some testing of the recent bounce, shifting the near-term focus to the downside, while the broader outlook is yet uncertain. 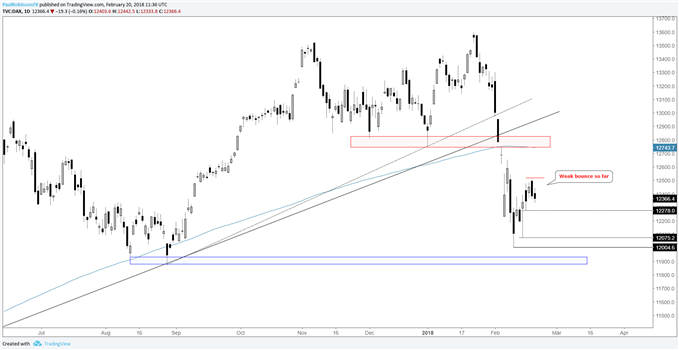