A Strong But Uneven Start for Risk Trends This Week

On the back of Friday’s rally in risk assets, there was a follow up charge in speculative appetite to kick off this new week. From my preferred, one-look (but imperfect) measure of speculative appetite – the S&P 500 – Monday opened to a sizable bullish gap but not much in the way of follow through. The jump from Friday’s close represented the second biggest session close to open leap in over three months. Comparing current conditions to those most recent milestones would leave us with a deflating impression. Previous gaps of the same magnitude were merely indicative of consolidation rather than any serious charge. Ultimately, this US benchmark is still trading between the 50-day moving average as immediate resistance and 100-day moving average as support. Those are proximate technical boundaries, but the bigger picture is one of restraint. It will be difficult to overcome this general inertia, but it is particularly more difficult a milestone with the first of the Presidential debates ahead. 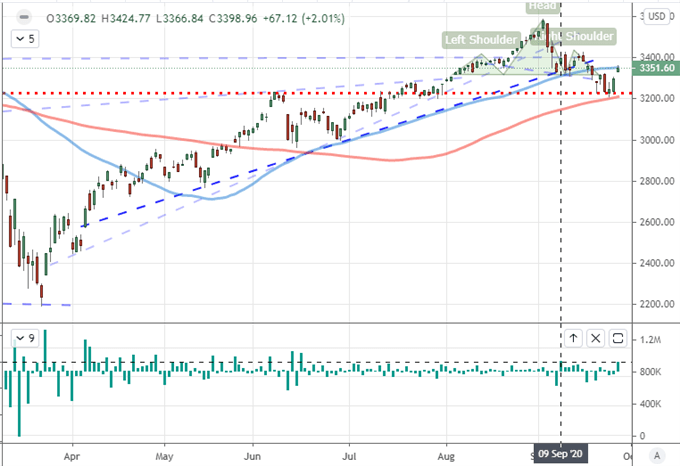 While there is a convenience in seeking out a ‘risk’ assessment in a single benchmark, it is notoriously misleading. As such, my preference in gauging conviction and intent is evaluating correlation and momentum behind a variety of speculative benchmarks. Notably this past session, there was a lack of charge behind Asian equities Monday; and during the US trading hours, other risk-sensitive assets proffered the break but little-to-no follow through. In short, there was very limited backdrop to support the swell in sentiment insinuated by the US indices. It is up for debate, but I would suggest that this more a reflection of relief from an attempted bear trend rather than a strong intent reversal in favor of a systemic bull trend. My chief reason for setting this distinction is the event risk ahead. 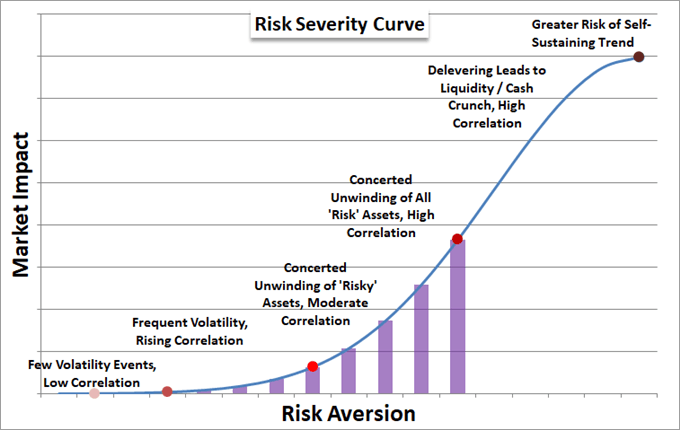 Event Risk Can Be a Catalyst and an Anchor

Perhaps the top scheduled piece of event risk on my radar for this week is Tuesday’s US Presidential debates. Incumbent Donald Trump and former Vice President Joe Biden are set to answer questions on the economy, coronavirus response and other key issues at 1:00 GMT Wednesday morning (9:00 PM Tuesday in Washington). While this event is naturally very abstract for what kind of impact it can have on markets, this particular cycle is perhaps more overt. The presence of a recession and global pandemic is one facet while the risk of an extended period of uncertainty for results is the greater worry. Regardless of how it plays out, the fallout from a ‘worst case scenario’ is palpable enough. Anticipation can render the markets a ‘deer in headlights’. That seems to be the setting at the moment. 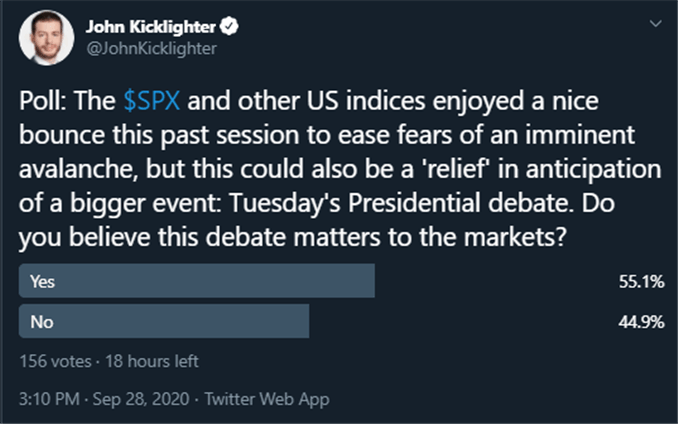 For risk assets, the possibility of an extended count beyond the November 3rd election is already drawing considerable discount through the VIX volatility curve. The US 10-year Treasury yield is another market measure that seems to reflect a building pressure out of uncertainty. The 5-day ATR (average true range) for the yield is the lowest since February before the pandemic struck. Perhaps less beholden to the forthcoming event, the US Dollar has seen is recovery effort – having overtaken all the immediate resistance milestones – lose traction. It will be particularly interesting to see how the Greenback fairs after the dust settle post-debate. 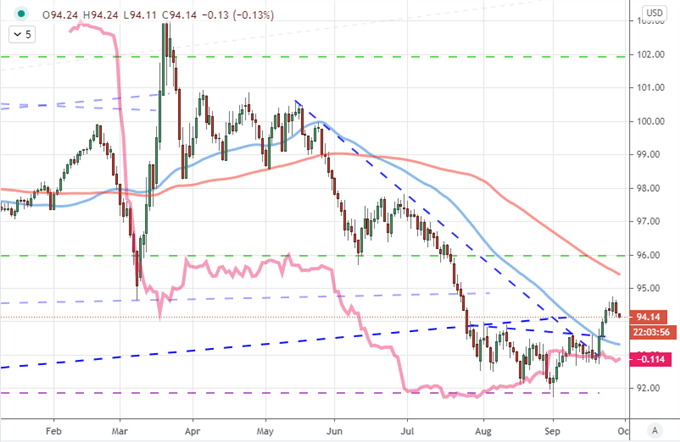 The Presidential Debates Aren’t the Only Driver At Hand

As far as scheduled event risk, it is hard to get away from the impact the Trump-Biden debate could have; but there are other threats for volatility on the immediate horizon. From the US docket, anticipation aside, there are a few headlines worthy of accounting for even if for later influence. The advanced August trade balance and Conference Board consumer confidence survey touch upon critical themes (trade wars and consumer spending respectively). Also, Micron Technologies will release earnings well ahead of the typical banks run of financial data due in a few weeks. Just as weighty, the Euro may start the feel the pressure of ruminations of intervention by key ECB members. Previously members Lane and Visco have suggested the rising currency was putting pressure on inflation, but it was President Lagarde herself that suggested the exchange rate was a headwind that may warrant countermanding. Thus far, the language has been a warning to hit the symptom rather than the perceived cause (perhaps negative rates or stimulus to rouse price pressures rather than intervene on FX), but watch for any threats. 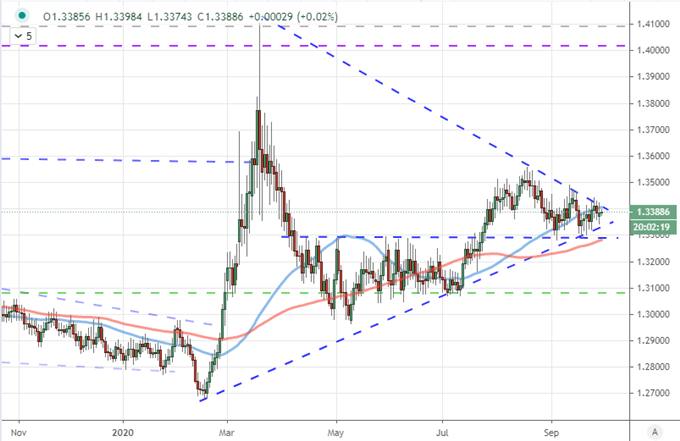 Another major currency of imminent fundamental threat is the British Pound. This past session the news of the spike in UK coronavirus cases and the pub curfew raised concerns. Prime Minister Boris Johnson seems to be struggling to put the country on the right course between COVID cases and economic recovery. Adding to the trouble, trade negotiations with the EU hit a level of urgency this week. Will the country and Union be able to hash out a compromise before the October deadline to keep trade flowing? EURGBP opened this week with the biggest bearish gap in nearly two years. Is that an answer? 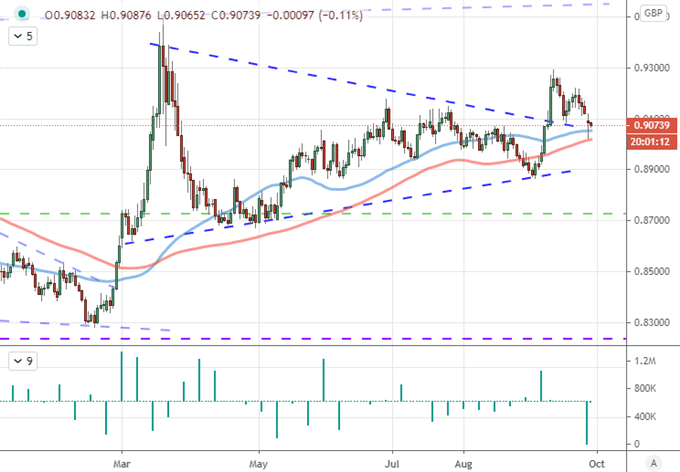