Technically, the S&P 500 and Dow advanced to fresh record high closes this past session. That said the rate of change from Monday to Tuesday was extremely limited. For many, a record high is a record high, but the dependency on pacing should be apparent at this point. From the speculative perspective, there has been a very uneven performance from the markets these past weeks and months which draws reasonable scrutiny to the top performers. Momentum seems to be the principal quality traders are looking for versus any true appeal for value. There isn't much untapped yield or under-priced opportunity in these markets in general, and that is doubly true for the likes of the S&P 500. Therefore, a loss of charge could prove fatal for any meaningful trend through the rest of the mature year. While volume behind the S&P 500, the SPY ETF and e-mini futures is still meaningful relative to the past few months, it isn't the kind of overwhelming drive to continuously forge record highs. To give perspective, the S&P 500's range this past session was the smallest since December 2017 - a market period very different than what we are facing today. 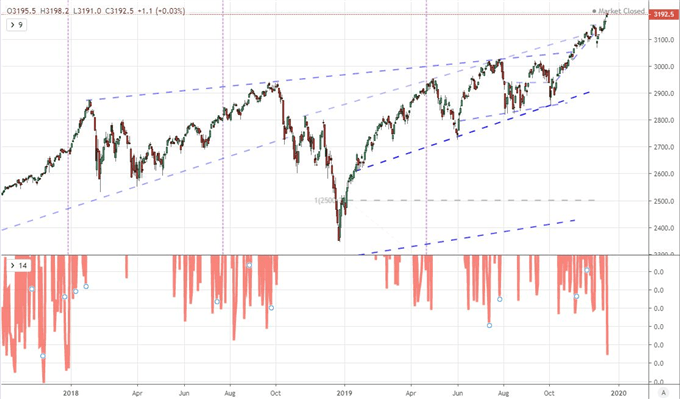 Looking across the related risk-based markets, there was a similar downshift in enthusiasm across 'other' asset benchmarks like 'rest-of-world' equities, carry trade and emerging markets (EEM). December is historically a strong month in terms of performance for the S&P 500, but a 1.6 percent swell at record highs may be enough. Volume also deflates through this same period as volatility melts away. There is always the chance that another wave of speculative reach arises, but that motivation tempers very quickly. In contrast, panic can seize hold far more assuredly, but it is less likely given the systemic themes have been largely disarmed just this past week. Trade wars was the best opportunity to cater to enthusiasm, but the US-China breakthrough finds USDCNH hovering at 7.0000 and emerging markets struggling to make any meaningful effort to close the performance shortfall. In the meantime, US Trade Representative Lighthizer shifted the focus back on growing trade pressure with Europe saying the country's deficit with the region was too large. Referencing the WTO's ruling that the EU had not yet fully cut its subsidies to Airbus, Lighthizer repeated the warning that the US is considering raising the tariff rates on its controversial product list. If there is any concern that this trade fight is due to explode in 2020, you couldn't tell from the EURUSD. 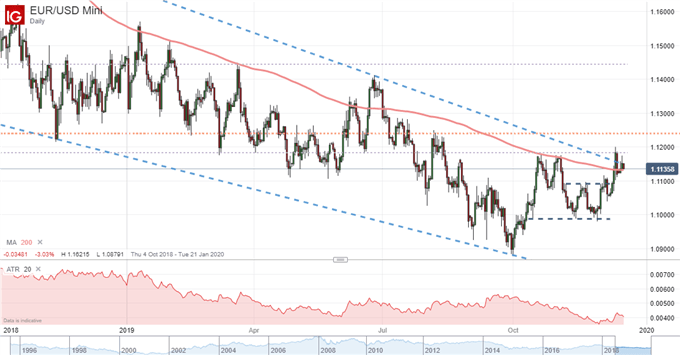 President Trump Once Again Calls Out the Dollar

In other top thematic news, the growth had a few points for traders to draw on. The US earned a notable upgrade with the Atlanta Fed GDPNow forecast rising from 2.0 to 2.3 percent for the fourth quarter, the US IBD economic survey rising to a 7-month high and a FT survey lowering the anticipation of a recession in the next 12 months from 53 to 40 percent. An monthly insights from Bank of America of fund managers expectations reported that the growth assessment jumped 22 percentage points and recession fears dropped 33 points to a net 68 percent of respondents saying a recession in the US was unlikely next year. It is the hallmark of speculative appetite that exposure to global equities would also jump 10 points and forecasts for corporate profits charged higher by 23 points. 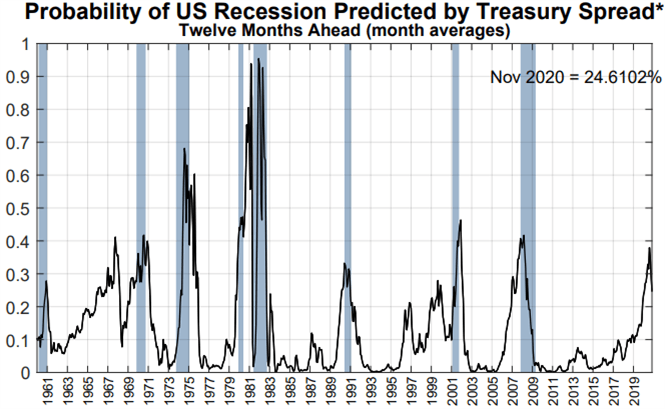 As impressive as the data may have been this past session, mounting a charm campaign among bulls through renewed growth hopes is a stretch given how buoyant markets are and uneven the data around the global economy has been this past year. A similar restriction on confidence rests with the other principal theme I've been monitoring: monetary policy. The central banks with room to run have leveled out their efforts, and that is what drew out President Trump's criticism Tuesday. He once again stated bluntly that the US Dollar was too high and that the Federal Reserve should lower rates further and continue to undo the quantitative tightening. This approach of burning policy options to fight future crises to leverage more short-term growth is actually quite familiar across the globe, but it doesn't make it a wise path to follow. What's more, the Fed has been reversing its modest tightening efforts these past months. Its balance sheet has in fact grown rapidly owing to their efforts to ease pressure on short-term lending rates. That does far more to draw concern on the state of the financial system than it does encourage growth. 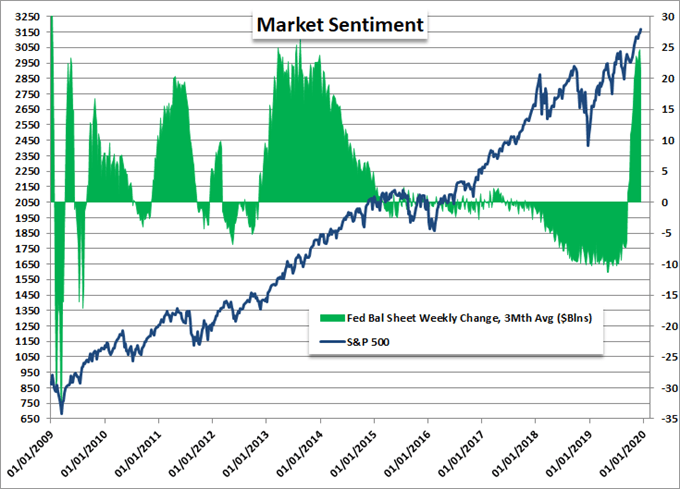 Sterling Takes a Tumble, Kiwi and Loonie May Have Their Opportunity

If you were looking for the biggest move this past session among the majors, it wasn't hard to spot. The British Pound was by far the day's most active currency. Following two days of exceptional ranges and large upper wicks, the currency took a steep dive through Tuesday. GBPUSD posted its single worst day's decline since November 14, 2018. And, just to ensure we don't mistake that for a Dollar move, EURGBP showed its biggest rally in the same time frame while GBPJPY, GBPAUD and GBPCAD all registered exceptional moves. The spark for this run was unsurprisingly Brexit related. Skepticism was already seeping back in following last week's UK election enthusiasm for a fast-tracked divorce proceedings from the EU when reports hit Tuesday that PM Johnson was looking to make an extension to the transition period beyond the end of 2020 illegal. Given many believe a trade deal without that time frame is very unlikely, we face a 'no deal' Brexit risk yet again.

Chart of GBPUSD with 1-Day Rate of Change (Daily) 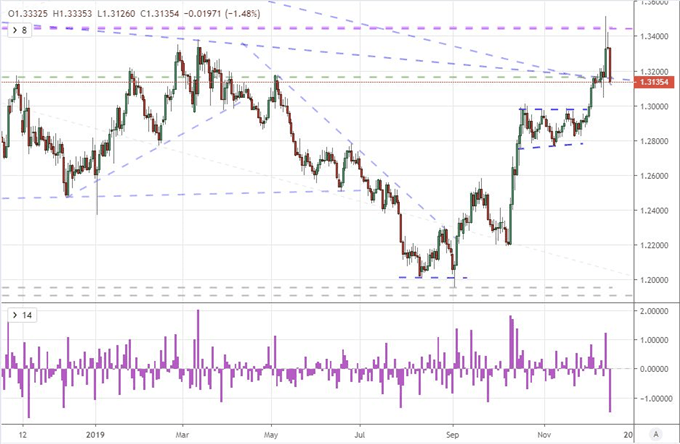 In the session ahead, I will be looking for more of this targeted volatility. The Sterling can very well continue to ply Brexit headlines to substantial swings - volatility begets more volatility. However, the docket provides specific potential for two currencies in particular. The Canadian Dollar is facing last month's consumer inflation data with the Bank of Canada attempting to divorce itself from the increasingly dovish cast of counterparts it maintains. Shake up that view and another jolts of volatility for USDCAD or a Loonie cross can follow. The higher profile release is the New Zealand 3Q GDP release. This has a less frequent history of significant surprises, but that only raises the risk of a significant move should such an update find its way to the docket. Keep tabs on pairs where volatility is already present like GBPNZD as well as the potential for the likes of NZDCAD. 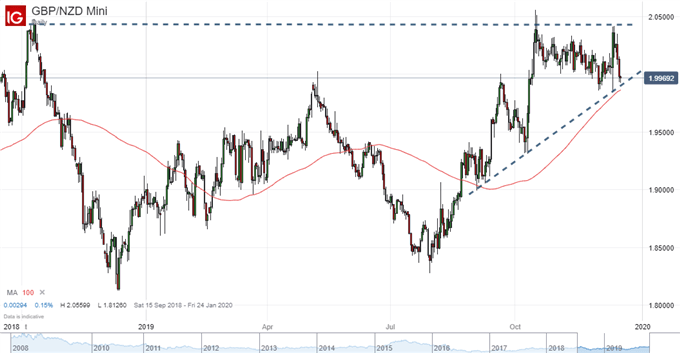