EURUSD Round Two Moving Past ECB Onto US GDP

Why Would the Euro Not Drop on Such Dovish ECB Rhetoric

There is little mistaking the dovish shift in the European Central Bank's (ECB) policy stance this past session with their official meeting. Though the group remained confident of the economic outlook - policy groups must be cheerleaders of their economies - it was also clear in the rhetoric that they were signaling intent to introduce more accommodation through the near future. We will put aside the long-term implications of major central banks moving further and further out on the limb of financial stability for the time being and account for the short-term influence. The statement was subtly dressed up to say rates were expected to be held at "present or lower" levels through at least the first half of 2020. Further, they were said to be examining further policy options such as new asset purchases and tiered excess reserve adjustments. The market reads it as further dovish policy adjustment come September, which incoming President Christine Lagarde seems to support through the IMF's official assessment.

Chart of Probability for ECB Rate Cuts from Swaps (Daily) 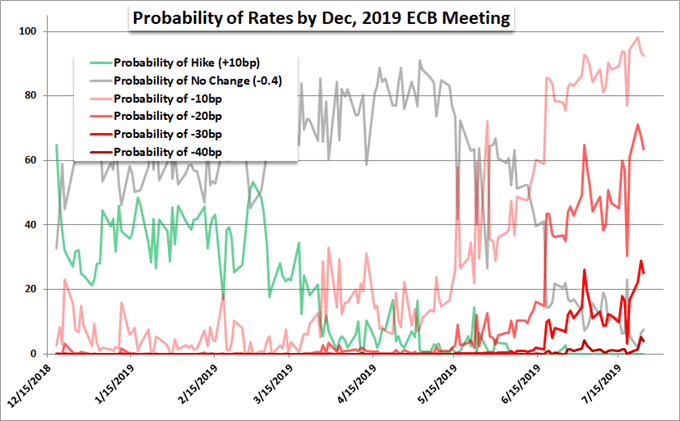 Further easing from the already stretched ECB would certainly present a significant fundamental weight on the Euro, so then why didn't EURUSD clear 1.1100 or EURGBP extend its head-and-shoulders break? While the European bank's course is definitely dovish, it wasn't as dovish as had been expected. Swaps had shown the market had afforded an approximate 40 percent probability of a rate cut at this meeting. Furthermore, the Euro itself has experienced a steady slide across board since ECB President Draghi's remarks at the Sintra speech last month. The bar was simply set too high. So, while the outcome is ultimately dovish, it wasn't dovish enough. In turn, we were left with an actual bounce from an equally-weighted measure of the Euro while EURUSD would put in for a volatile but little changed day which took on a 'doji' candle pattern. 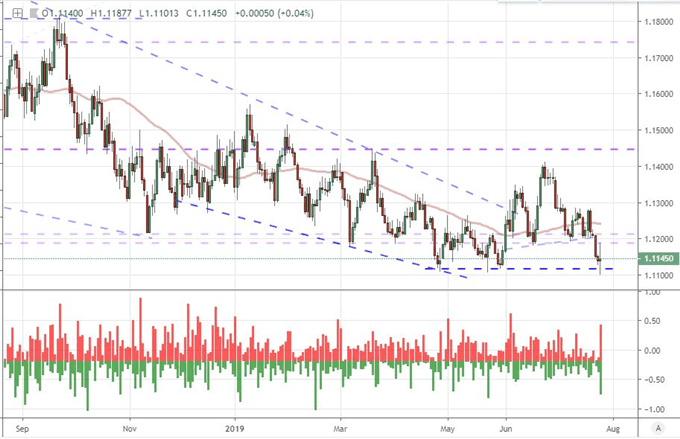 Attention Turns Back to Growth with US GDP

Perhaps EURUSD would have climbed further after its brief test and ultimate boune off of the three-month range low if there weren't an immediate fundamental distraction ahead of us. Alas, we are heading into another high-profile scheduled event risk. The US 2nd quarter gross domestic product (GDP) reading is scheduled for 12:30 GMT Friday morning - before the official US open. The event is already important owing to its reflection of health for the world's largest economy. Yet, it even more a loaded theme owing to the steady improvement in data around this economy through the week. On Tuesday, the IMF lowered the global growth forecast by a 'tick' to 3.2 percent but it would very notably increase the US 2019 performance metric 0.3 percentage points to 1.6 percent. Wednesday's July PMIs only furthered this contrast with the US 'composite' reading rising 0.1 points while Japan and the Euro-area either stagnated in negative territory or slide from the previous month. There is a notable anticipation for the Dollar on this basis with the Dollar up smartly over the past week. 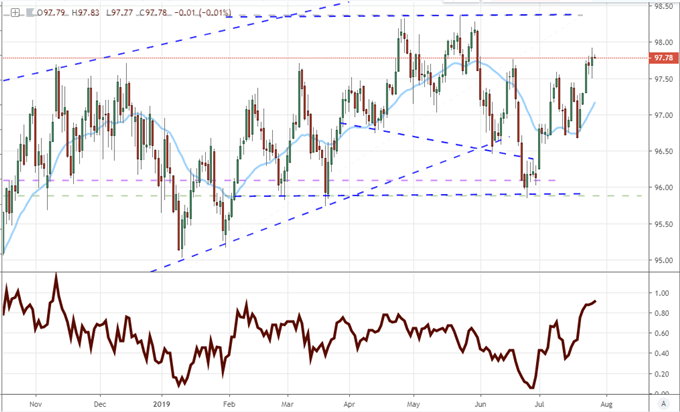 When the market enjoys a one-sided run when conditions are otherwise more evenly balanced, there is a loaded potential to reconcile. After the Dollar's charge this past week, we have accounted for a considerable level of optimism from this data point. That isn't to say there is little or no chance of follow through, but the potential will certainly by truncated. Among the 'majors', USDCAD may be one of the more appealing pairs given its recent technical progress, not to mention the lack of override from the Loonie. In contrast a EURUSD conduit would insinuate a multi-year break which would would be quickly complicated by the expectations of the FOMC rate decision next week. 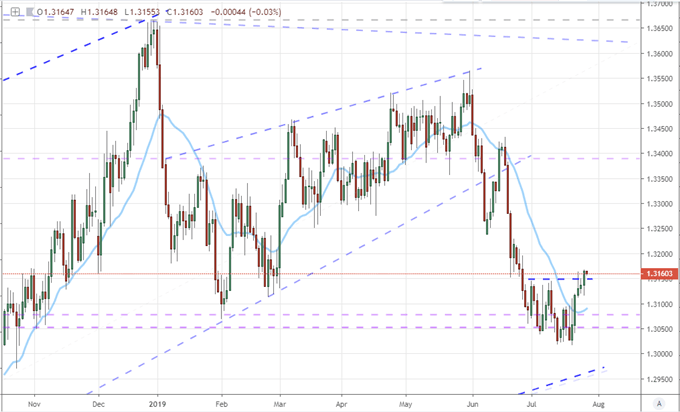 Looking across the liquid FX market, there is value to be found in the fundamentally-driven currencies; but jumping from one high profile event risk to the next can create an uneven backdrop for trading anything beyond a very short-term time frame. While that may not set the scene for a deep trend for an individual currency, it can help to avoid a situation where anticipation doesn't short circuit a technical move founded through other means. One such currency that may stand to benefit from this equation is the Australian Dollar. Following its steady advance over the span of weeks, the currency has experienced a notable retreat from key resistance across the board: AUDUSD backing off a 200-day moving average, AUDJPY failing an inverse head-and-shoulders neckline, EURAUD bouncing at long-term trendline support. That is a hold ot congestion worth monitoring. 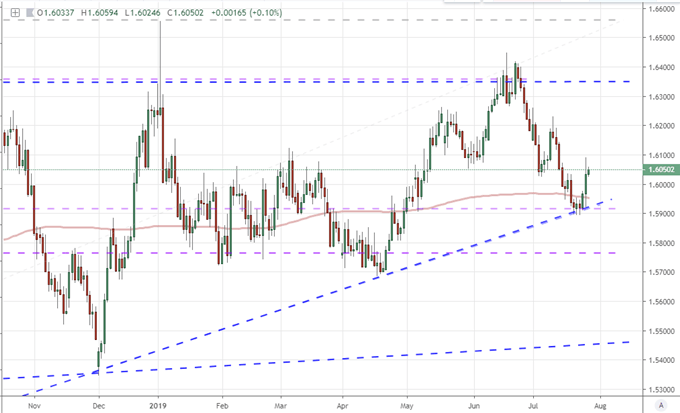 The Canadian Dollar is in a similar position. There is little scheduled event risk for the Loonie to deal with and limited high-profile fodder over the coming week. In a pair like USDCAD, there is some technical progress as the Canadian Dollar shifts to a dovish phase; but such a scenario would require the cooperation of the Greenback. Perhaps more surprising in this context would be the British Pound. The Sterling has been a fundamentally-charged major thanks to the relentless pressure of the Brexit situation. This past month has seen the currency deflate owing to the lack of genuine progress in the divorce and the rise of a more aggressive Brexit shift in government. New PM Boris Johnson reportedly told EU President Juncker that no progress would be made unless the Irish backstop was abolished - criteria for which the EU has little interest. Yet, that building threat of a disorderly Brexit is still cast in doubt as the probability of a general election lingers. In the interim, the Pound may prove an unexpectedly compliant counterpart. 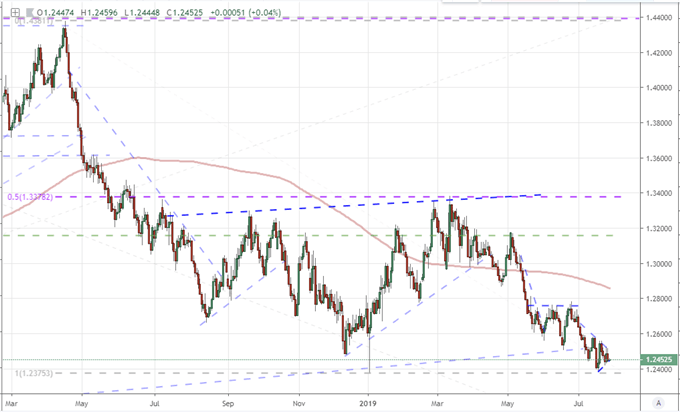 While monetary policy and growth push and pull at the global financial markets, it is important not to lose sight of the other key fundamental themes - nor of the pull towards key event risk into next week. From the perspective of the US earnings season, the New York open will prove interesting. We were faced with a run of financial numbers from tickers that have more-or-less controlled the reins of speculative interest for months. Intel beat expectations soundly this past session, which perhaps may register on the radar of those watching companies with significant exposure of sales to China. Google was far more prominent with a robust quarterly print ($14.21 EPS versus $11.49 expected) but a ominous backdrop of a DOJ anti-trust investigation. In the meantime, Amazon is facing the same pressure - arguably more - but its own earnings ($5.22 versus $5.56 EPS) and forward guidance disappointed. Speculative appetite founded on 'disruptive FAANG members is up in the air at the moment. 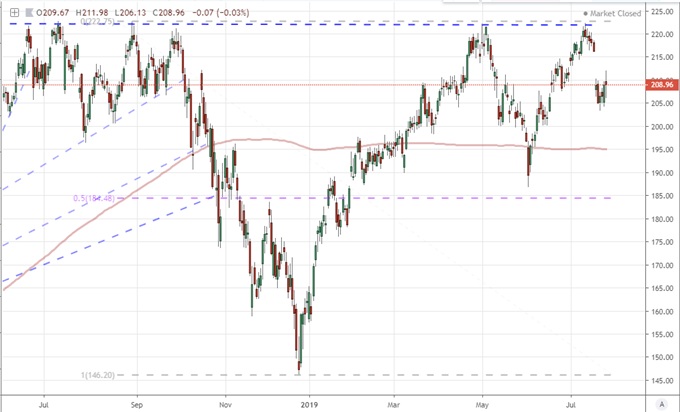 As for trade wars, the speculative appetite is borrowing little drive from the steady wind and there are is little indicative movement from the likes of USDCNH. The reports that China is hosting the 12th round of high-level talks is met with a general sense of skepticism. Reports, however, that China has approved purchase of US soybeans free of tariffs as a goodwill measure does offer a little encouragement. Trade wars is a constant hum in the backdrop simply awaiting an errant headline or tweet. Keeping tabs on what lies ahead - both on the docket and off - will help serve us well in laying out our expectations. We discuss all of this and more in today's Trading Video.

See how retail traders are positioning in EURUSD, EURGBP and other key Euro crosses alongside a host of other liquid FX pairs using the DailyFX speculative positioning data on the sentiment page.