S&P 500, USDCNH and EURGBP Nexus of Speculative Interest Next Week

Trade wars were at the top of the headlines this past week - which makes it the primary medium for speculative interests - and it will likely retain that influence when liquidity returns Monday. While these global relationships are ultimately influential for the pressure they put on economic activity or financial stability further down the line, speculative markets attempt to price known risks well before the impact is registered. And, it is this concern of fallout that continues to unsettle sentiment at such an inopportune time - with the S&P 500 and Dow losing traction just off of record highs. What is interesting about the bias that held through the end of this past week is that the market could have seized on favorable developments in trade relationships if there were any latent feelings of optimism to exploit. That fact that the encouraging signs were overlooked suggests there may be some skew to account for moving forward.

The improvement to the long-standing dispute over trade was registered with a smaller skirmish in the market's radar and the avoidance of a much larger economic block being added to the already-complicated environment. The biggest relief this past week was the Trump administration's confirmation that it would delay the decision on whether or not it will levy taxes on imported autos and auto parts as a means to answer a perceived national security risk. That was the expected outcome owing to the risk it posed to the financial system, but the unpredictable Trump administration is no longer taken for granted. As significant as that 6 months of policy freeze is, it didn't heft enough strength to drive the DAX or Euro higher much less global risk trends. The other tangible update on the day was the news that the White House would lift the import taxes on steel and aluminum for the Canada and Mexico - in a bid to push the USMCA deal through its own Congress. Here again, the response was extremely tepid with the Canadian Dollar and Mexican Peso showing little in the way of assurance after the news. 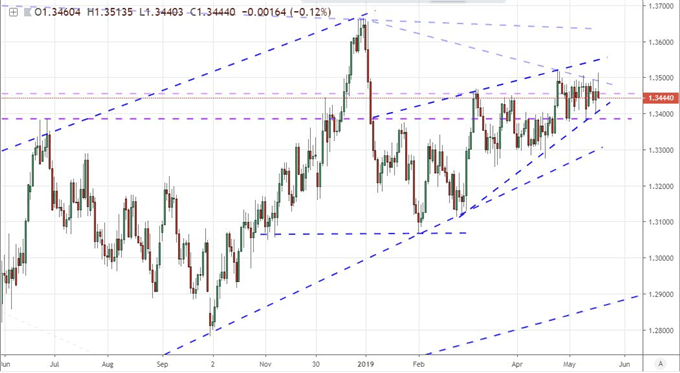 In contrast to the progress made in the United States' trade relationship with Europe, Japan, Canada and Mexico; the pressure has not eased in its standoff with China. In a week's time, anticipation of a compromise and a course reversal in the most expensive trade war in history has turned into an incredible escalation of tension with threats of far more. Following the US tariff hike on $200 billion in Chinese goods (10 to 25 percent) and China's retaliation on $60 billion in US imports, there has been little assurance that talks were picking back up. In fact, unconfirmed reports suggested discussions had broke down Friday, news that seemed to exert considerable pain through the S&P 500's close Friday. Though there are still three weeks until the US considers adding another $325 billion in Chinese imports to the tariff list according to the President, the mood has set the market's tone. With Chinese telecommunications company Huawei added to the US 'entities list', it will be very difficult for the two countries to negotiate in good faith.

Monitoring Risk Trends from S&P 500 to Yields, Gold to USDCNH

As we move into a new week of trading, it is critical to keep track of the different measures of 'risk trends' that reflect upon unique threats to the system. The favorite measure remains the US equity indices. These measures maintain a long-term premium relative to virtually all other systemic risk measures (global shares, carry trade, emerging markets, junk assets, yields and more). The S&P 500 was only 3.2 percent off its intraday record high through the close - which seems a favorable signal - but the context of the undying complacency from this measure dampens the speculative view. Looking to the scale of intraday reversals from the benchmark (resulting in 'tails') we find an unmistakable pressure against bullish progress. Furthermore, the past two weeks opened with large bearish gaps lower, each the largest in a decade. If there were a third such large drop lower to start this next week, there little chance that the market would miss the signal. 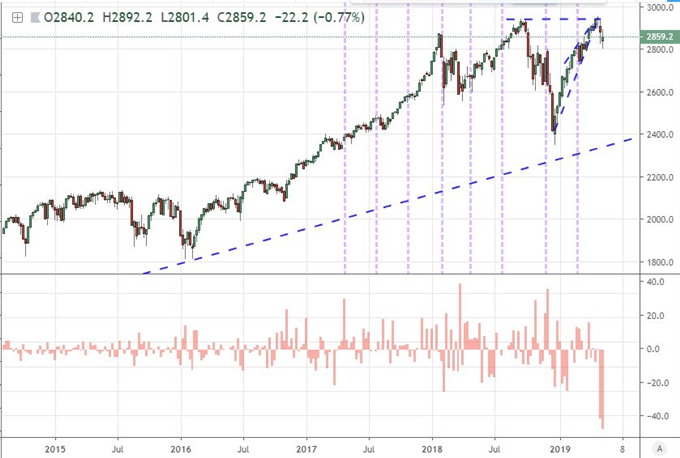 In the meantime, my assessment of market sentiment rests more heavily with measures that have far less connection to the complacent speculation that has kept purely financial assets like the US indices propped up. Global government bond yields for example incorporate not just the appetite of traders hungry for every basis point of yield and willing to hold for any capital gains, but they also reflect growth potential as appoint of value. It is therefore troubling to see the scale of divergence between the likes of the S&P 500 and aggregate yield of the largest 10-year government bond yields. Gold is another multifaceted speculative measure. Rather than playing the role of a rote safe haven, this commodity is prized when risk aversion comes with a material complication in confidence for financial stability and currency health. If the metal is rising materially, there is reason to be concerned. 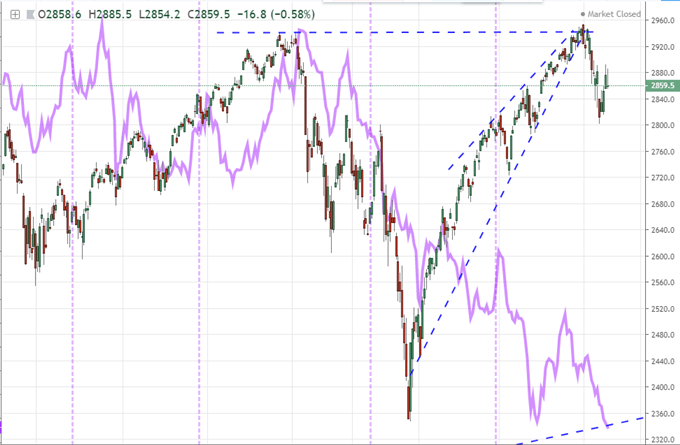 The most troubling risk-oriented scenario that I am keeping an eye for the week ahead is a possible sustained advance in the USDCNH (the Dollar-Chinese Yuan exchange rate). Chinese financial monitors exert careful control over the exchange rate, preventing market runs that could trigger complications in market stability. There is an unspoken but understood cap on the USDCNH exchange rate at 7.0000 that the PBOC has defended in the past likely in an effort to avoid accusations of exchange rate manipulation aimed at unfair trade advantage and to avoid the perception that the authorities are losing control over capital controls. If this rate were to overtake that level, there is no way reassuring alternative explanation for such a run and authorities would likely default to an explanation that it was a strategic decision (rather than a troubling loss of influence) which would drive trade wars further. Intervention is very likely as we hold near 7.0000. Keep an eye on USDCNH as global investors weigh their confidence for the future.

Chart of USDCNH and 2-Week Rate of Change (Weekly) 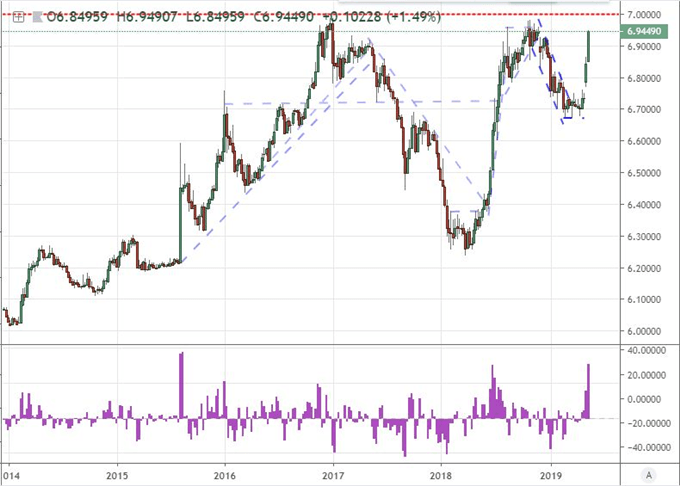 Combing the economic docket over the coming week, there are a host of noteworthy releases; but true market movement will likely reside with only those few measures that can tap more systemic issues. For example, the there are RBA minutes and 1Q construction activity figures from Australia over the coming week, but the currency's attachment to trade wars will determine next moves for the AUDUSD at fresh multi-year lows. The Canadian Dollar is another remarkable contrast in fundamental waves against unflappable price action. USDCAD has refused to clear its approximate 100 point range despite the trade war breakthrough. That move is inevitable, but when will it happen and can it establish any real follow through?

For scheduled event risk, the biggest listing on my docket is the EU Parliamentary election which runs from May 23rd to the 26th. The outcome for this vote has enormous implications for the Euro which has struggled against the news German growth has stalled and Italy is pushing back against debt restrictions. If nationalist parties gain greater traction in the polls, anti-EU and anti-Euro sentiment is likely to climb. The Sterling will also find itself tied to this event. The government had to agree to participate in elections in order to draw the extension on the Brexit negotiations. That additional time was clearly necessary as we watched discussions breakdown between Government and Labour party this past week. Whether you like Prime Minister Theresa May or not, reports that she will lay out the time frame for her stepping down next month only adds to the uncertainty we are dealing with. 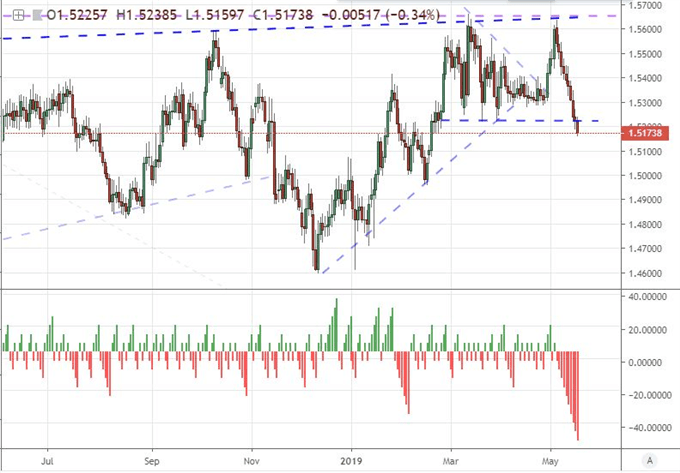 As these majors deal with their own fundamental tides, the most liquid currency may find itself at the mercy - or taking advantage - of its benchmark counterparts. The US Dollar has defied its traditional ties to volatility as a safe haven currency and its carry trade status hasn't seen a positive correlation between USD and interest rate forecasts derived from Fed Funds futures. As for data, the strongest consumer sentiment data (from the University of Michigan) in 15 years seemed to stoke little enthusiasm as the trade wars retain a special place of concern moving forward. There is notable event risk ahead for the Greenback - Fed's Powell speaking, May PMIs for a GDP proxy and the FOMC minutes - yet this mix is unlikely to spur the currency to life. The real capacity for the Dollar to move will be through the contrast it draws from its major counterparts. If the Euro, Pound and Yen all drop moving forward; the USD will benefit. If they lose traction, it will be chop. We discuss all of this and more in this weekend Trading Video.