USDCAD climbed over 100 pips from Thursday’s intraday low and topped the 1.35 handle early Friday only to quickly tumble thereafter as contradicting news clouds the currency pair’s direction over the short term.

The Canadian Dollar depreciated against the US Dollar throughout most of yesterday’s trading session, likely in response to downbeat commentary in the Bank of Canada’s (BOC) Financial Stability Report. The BOC stated that vulnerabilities and risks to financial stability in Canada ticked “slightly higher” mostly owing to “fragile corporate debt funding” and a high “overall level of indebtedness” in the country. 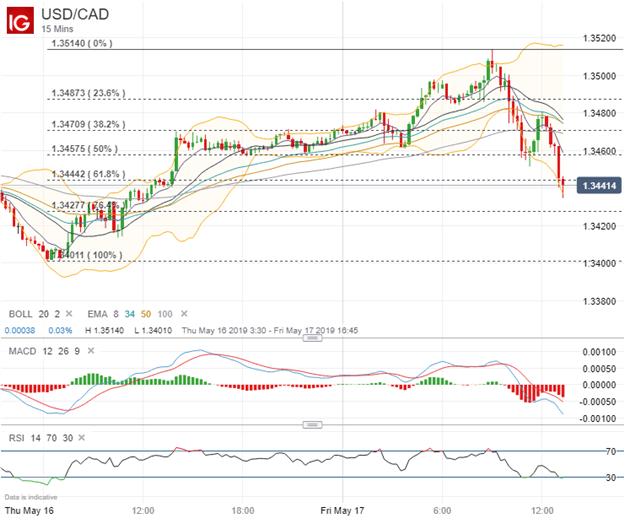 The report also largely discussed headwinds faced by slowing economic growth. Consequently, USDCAD climbed broadly higher. But, the central bank noted progress in areas of mortgage lending and household borrowing while concluding that the “system remains resilient and confidence among market participants continues to be high.”

Late on Thursday, upside in USDCAD was exacerbated by reports from the Trump Administration that it plans to slash tariffs on Turkish steel exports in half from 50 percent to 25 percent. The official report stated that “maintaining the existing 25 percent ad valorem tariff on most countries is necessary and appropriate at this time” which some market participants interpreted as Trump plans to leave metal tariffs currently imposed on Canada in place – possibly jeopardizing the long-anticipated USMCA deal. This seemingly countered the upbeat USMCA rhetoric earlier in the week, previously pushing the Canadian Dollar higher.

In the morning hours of New York trade Friday, the White House confirmed its intent to lift metal tariffs after President Trump and Prime Minister Justin Trudeau spoke on the phone early Friday. With the removal of tariffs on steel and other metals like aluminum, the biggest obstacle to finalizing the USMCA deal appears to have been overcome. Also, the countries reportedly agreed to stronger monitoring and enforcement procedures opting against import restrictions via quotas. This is a major breakthrough considering 19 percent of US steel imports were from Canada whereas Canada sent nearly 90 percent of its steel exports to America.

Along with Mexico, it looks like a final USMCA deal may soon be reached between the three North American trading partners which could provide some added buoyancy to the Canadian Dollar and Mexican Peso over the short and medium term. Meanwhile, a headwind is in place with the US Dollar pushing higher today after a stellar consumer sentiment report from the University of Michigan – news that is likely offsetting the dive lower for USDCAD and USDMXN.