See how retail traders are positioning in EURUSD after the break, GBPUSD between Fed and Brexit, Gold as it plays unique safe haven along with the rest of the FX majors, indices, and oil intraday using the DailyFX speculative positioning data on the sentiment page.

The Fed Caps the Global Effort to Normalize Extreme Easing

After years of making a concerted effort to carefully shape market expectations for its monetary policy intent, the Federal Reserve still managed to catch the financial system (and me) off guard. In its 'quarterly' event, the US central bank kept to the script when it came to its benchmark monetary policy tool. The Fed Funds rate range was kept unchanged between 2.25 and 2.50 percent as widely expected - in fact, there was a slight speculation in Fed Fund futures that it could be a rate cut. The surprises arose from the details. Alongside the rate decision, the group released its updated quarterly forecasts. Most seized upon the group's interest rate outlook which now shows the majority projecting no changes to the benchmark through 2019. Back in December, the outlook was for two hikes - down from three in September. Given that the market was forecasting an approximate 25 percent probability of a cut before year's end through Fed Fund futures, there was naturally anticipation that it would lower the target. Halting rates for this year and only projecting one further 25 basis point move in the following two-year span is an unmistakably dovish outcome. Further details on plans to level out the balance sheet after more than a year of slow reductions is another explicitly dovish development. 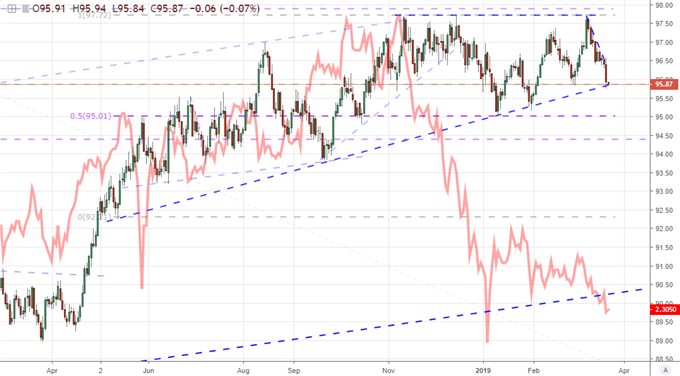 The Fed's policy reversal in the past six months marks a critical milestone in global policy. We have seen the ECB recently curb its normalization efforts before they even got off the ground with the introduction of its third round of TLTRO. The Bank of Japan's minutes released Wednesday morning showed the most dovish major central bank is at a loss as to what to do next to help foster growth and inflation that it has thus far failed to secure despite a seemingly unlimited stimulus effort. In short, the global central bank effort has moved fully away from the intent to slowly back away from the emergency policies that followed the Great Financial Crisis a decade ago. In years past, this would throw fuel on speculators' fires. This could still happen today, but the markets are proving to be far more introspective now than they were in the heydays of moral hazard and the 'complacency bid'. What would be truly worrying is if this overt transition to offer support returns no confidence. If markets were to falter despite the additional support, that unusual skew would act like a beacon for concern. 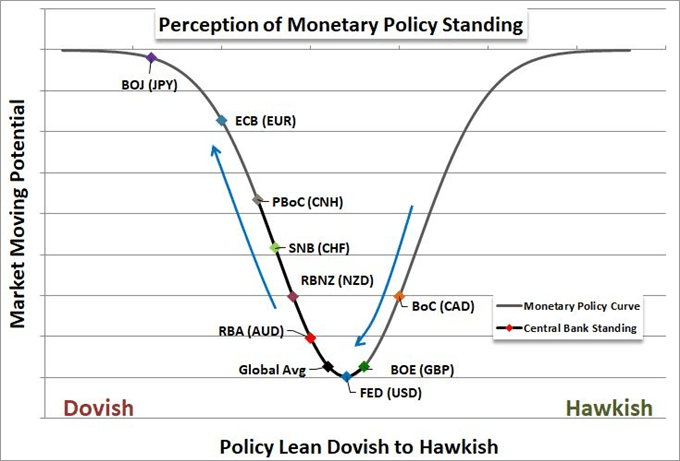 With the Fed's policy shift, we had a very clear reaction from the US Dollar. The DXY tumbled when the central bank dimmed the currency's carry trade star. While there isn't much carry trade built into the FX market over the past decade owing to the persistently low rates of return on a historical basis, the Dollar is still operating on a premium for its own speculative appeal. The rally in 2014 in advance of the first Fed hike is still built into the currency's present level. That means it can certainly lose traction. I am also generally bearish on the Dollar for growth considerations, the slow loss of its reserve status and side effects of its instigating trade wars. Yet, that does not mean the Greenback is destined to tumble nor that all majors are fair game. Even with the downgrade in rate forecasts, the Dollar maintains a considerable yield advantage relative to its major counterparts. In this case, the counterpart is particularly important. Where DXY is still holding up its 200-day moving average and 10-month trendline support as of Thursday's open, EURUSD cleared its own trendline resistance above 1.1365. GBPUSD actually fell, USDJPY broke support in its bullish channel and USDCAD was ultimately little changed. If the Dollar is marking so little progress across most the market, is it reasonable to expect EURUSD to continue to run? That depends on the Euro, and that may be misplaced optimism. 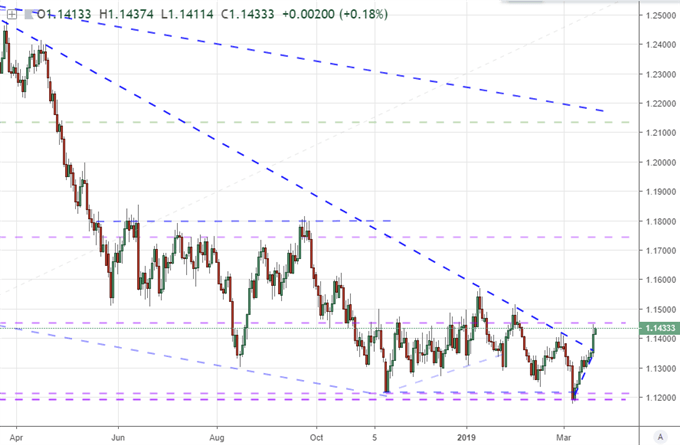 Expectations surrounding 'risk trends' in the wake of the Fed are more readily grounded. There are certain risk assets that have responded favorably to the accommodative shift from the world's largest central bank. Junk bonds climbed quickly as the competition from blue chips was tempered under a more reasonable rate trajectory. The EEM emerging market ETF managed a climb but its progress was notably truncated on the chart - EM currencies fared better thanks to the Dollar's troubles. Yet, the most favorably positioned market, US equities, didn't even muster a gain through Wednesday's close. The S&P 500 already earned its bullish break at the beginning of the week, and this event wouldn't even capitalize on the opening move. If this benchmark index (along with the Dow and Nasdaq) continues to spin its tires this week - or actually loses ground - it will stand as a glaring disconnect to the norms expected in a connection between central bank policy and risk appetite. Should that generous safety net and speculative whip fizzle, it can put the better part of a decade's climb in jeopardy. 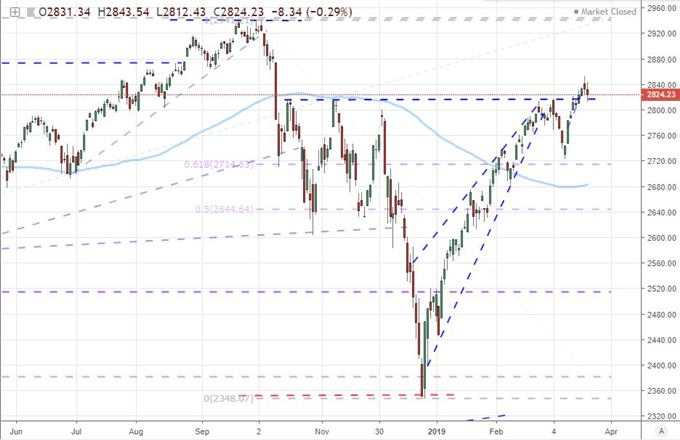 While the Fed's course change is very important to the global financial system and economy - not to mentionthe shape of the speculative environment - it isn't the only issue driving volatility or technical cue tempting trade interests. The Pound was once again a top mover - dropping more aggressively than all its major counterparts (even seeing GBPUSD drop). With the third meaningful vote in Parliament on the Brexit proposal already iced by the Speaker of the House of Commons, the interest now was pure, unscheduled headlines. Prime Minister May made official that the Brexit wouldn't take place on March 29th and she was seeking an extension of negotiations only until June 30th. She reiterated it was 'her deal, no deal or no Brexit at all', but these warnings are increasingly falling on deaf ears. The EU Summit today and tomorrow will almost certainly dedicate the majority of its time to this messy divorce. This is as much an issue for the Euro as the Pound, so keep tabs on the EURGBP for implied volatility. Furthermore, don't expect too much from the BOE decision or ECB bulletin unless they are remarkable enough to override a situation as complicated and wide reaching as Brexit. 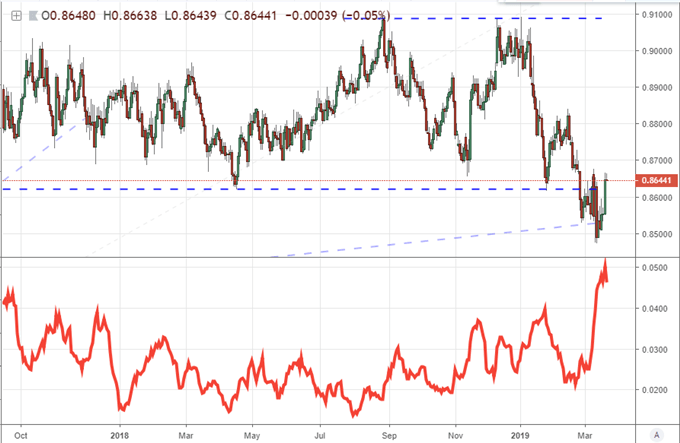 In more discrete news, the New Zealand Dollar extended a climb through the morning following otherwise unremarkable GDP figures. NZDUSD is working on a breakout, but other Kiwi crosses may see their ambition checked by counterparts. The Australian Dollar had employment figures this morning but the miss on the headline change does little to amplify AUDUSD or offset AUDNZD momentum. The RBA minutes were also a detriment to bulls' cause. Aside from the BOE, there is another European rate decision ahead: the Swiss National Bank (SNB). The market has all but written off the influence of this authority as it holds deep in negative rates. This event is unlikely to pass with a change and that will keep the Franc a pliable counterpart for more active currencies. If there is a surprise, though, it could generate considerable volatility as it is largely unexpected. In commodities, gold remains the most important measure in my book as it measures the deep risk aversion born of the erosion in financial stability but not yet generating pain in headline assets. Crude oil, on the other hand, is the more impressive technical picture at the moment. The market overtook the midpoint of its fourth quarter tumble but does so with limited momentum. Risk trends probably played the bigger role here post Fed but the biggest draw in US inventories (9.6 million barrels) probably contributed a little support. We discuss all of this and more in today's Trading Video.