What Will the Dollar, S&P 500 and Risk Trends Follow After the US Elections?

How are the US mid-term election results going to impact the US and global financial markets? Join Senior Strategists Ilya Spivak or Christopher Vecchio's trading Q&As to find out. You can find these events and more on the DailyFX Webinar Calendar.

The US polls are drawing to a close and the world is engrossed. Will the Republican party retain its control of both house of Congress or will the Democratic party swing the balance of power in Washington? There will be plenty of aftermath coverage on the event over the next 24 hours along with countless appraisals of the new makeup of the United States government will change the course of both the country and global policy. However, there is very likely little tangible implication from this event when it comes to the foundation of 'risk trends' underlying the global financial markets. While certainly important in a world of devolving political civility and eroding economic relationships, the most closely observed stakes in this elections are social in nature. And, where the matters are more definitively market-worthy - regulations, taxes, trade wars, sovereign credit rating - the potential for variability between the scenarios is generally small or too far into the future to hold the market's attention. As effective as this event is at sidetracking productive markets progress, it would struggle to reasonably carry a trend when there are so many other unresolved fundamental issues at play across the global markets. That said, removing the parking brake on development in risk assets or the Dollar is value-add enough for trading. Just be mindful of the shift in potential as mean-reverting strategies in a more capable breakout environment do not typically end well. 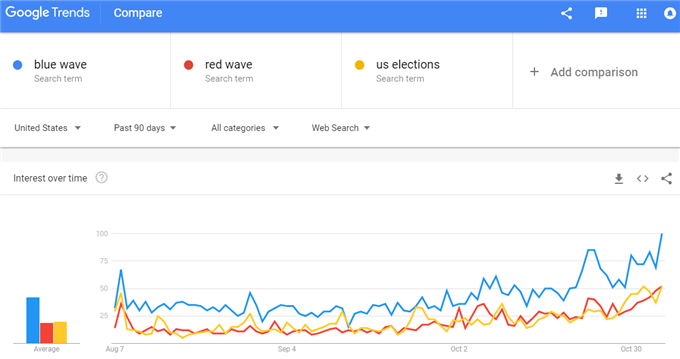 What Will We Focus On When Politics Aren't There to Engross Us?

As US politics moves back out of the market pages of newspapers, what themes should we expect to redirect our attention for volatility and potentially the establishment of genuine trends? International relationships with the United States are one feature of the US political landscape that all investors should be mindful of - it just is unlikely to change wholesale regardless of the composition of the Legislative branch. President Trump has driven much of of the global trade war and sanctions that developed over the past eight months. While the United States' strained relationship with the European Union and Japan are still on an uncertain course, the US-China trade war continues with few footholds for confidence to build. Following last week's juxtaposed assessment of the relationship between Trump and his chief economic adviser following the former's call with President Xi, we are looking ahead to the restart of high level security talks between the two countries to begin once again Friday. In the meantime, keep the Chinese trade balance update Thursday on the calendar. Specifically for the Dollar, we can revert more readily to a reliable fundamental theme: monetary policy. The FOMC (Federal Open Market Committee) rate decision is scheduled Thursday and forecasts for rates through December 2019 derived from Fed Fund futures have taken a turn higher the past week. This theme and event has far greater capacity to drive the currency lower on a 'bad' outcome than it does lift it with a 'good' update.

As we watch to see the market realign its focus for risk trends and the Dollar, the primary concerns for trading the Euro and Pound have not changed much. For the former, the standoff between Italy and the European Union over the former's budget continues with news that the Senate was calling for a confidence vote amid in-fighting over key issues like immigration and fighting corruption. The move seems a move aimed a solidifying support behind the government so there are no disruptions in the push to refuse ultimatums and perhaps even a hefty sanction against the member for breaching rules. The effort could certainly go against the government - much like UK Prime Minister Theresa May experienced - but that seems a significantly smaller risk in Italy (an in turn a greater risk to stability behind the Euro). Speaking of the UK, the Brexit position from the country has yet to see the critical breakthrough markets have been awaiting. The UK cabinet meeting Tuesday fell short on the critical agreement necessary to return to the EU for further negotiation. There are reports of a second gathering Friday which would compete against an important round of economic event risk including 3Q GDP and the monthly trade balance for command over the Sterling's next move. Beware the pause before the storm as much as the possible tumult from the events themselves.

Outside of the major, unresolved fundamental themes, there are still significant catalysts to find in the open market. A good example of what the properly applied pressure could earn from the market was seen in the New Zealand Dollar's rally early Wednesday. In the span of minutes, NZDUSD rallied 60 pips following news that employment through the third quarter improved sharply. On a 1.1 percent increase in employment through the period, the jobless rate dropped 0.5 percentage points to 3.9 percent and average hourly earnings surged 1.1 percent. That is significant in economic terms, but does it systemically change the backdrop of what matters most to the currency in its role as a 'major' currency? It is unlikely. To tap a systemic interest, the RBNZ rate decision ahead has the capacity of transitioning a week-long climb into a more reliable trend. And, even though the probability is against this currency reviving its full-fledged carry credentials anytime soon, the markets are ready to read into even subtle hints. In a completely different market, crude oil extended its slide to lows not seen since March. Given reports of sanctions on Iran and OPEC struggling to meet production quotas, the 20 percent drop in the WTI benchmark contract in a single month is exceptional. What's more, the European-preferred Brent contract is down 17 percent itself. This is not isolated factors. We discuss all of this and more in today's Trading Video.