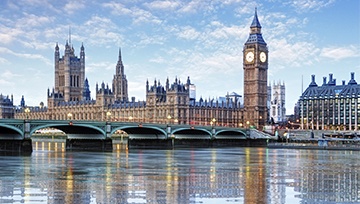 - The British Pound has had an interesting day already, first bouncing higher after the release of stronger-than-expected inflation numbers from the month of August. This was then followed by a full reversal of those prior gains as negative Brexit headlines began to show. At this point, prices have stabilized while trying to build support around a key Fibonacci level at 1.3117.

- This may be setting up a bull trap, however, and buyers might want to wait for a deeper pullback before looking to take on top-side exposure: And there is another side to the argument, as prices have begun to test below the bullish trend-line that can be taken from the lows over the past two weeks. As we previously pointed out – this may be part of a rising wedge formation that will often be looked to for bearish reversals. It’s still early, and traders would likely want to proceed with a bullish bias until lower-lows begin to show, but that bearish potential is building and, if coupled with more negative Brexit headlines, could soon provoke a bigger-picture reversal of the past month of strength in the pair.

The topside move in GBP/USD has continued into another day as prices pushed up to 1.3213 earlier this morning. The level of 1.3213 was a swing-high from late-July, and this last came into play ahead of an aggressive bout selling that enveloped GBP/USD price action for the next three weeks. Eventually, this led to a test of the 23.6% Fibonacci retracement of the Brexit move at 1.2671, and this is where the declines finally ran into some lasting support that was able to shift the trend. In the month since that support has come into play, we’ve seen a bullish move that’s driven Cable back-above the key psychological level at 1.3000, and has brought the 38.2% retracement of that same Brexit move back into the picture.

As we’ve been following, the initial portion of this topside move appeared to emanate from short-cover. After a big support level came into play after a stern down-side run held in the pair to open the month of August, oversold conditions were showing on both weekly and monthly charts.

But – as we also pointed out, many new bullish trends begin as a short-squeeze; with bullish follow-thru taking-over as the context around a scenario begins to shift. This could be driven back to the late-August announcement from the EU’s Chief Negotiator, Michael Barnier, when he said that the EU would be open to a post-Brexit partnership with the UK. We mentioned at the time that this could be a game-changer for near-term GBP/USD price action, as prior fears of a Hard-Brexit or No Deal Brexit scenario were starting to get priced out of the market. And while the ride wasn’t smooth, that bullish bias continued to take-over until prices were back to testing the 1.3117 level late last week.

This level helped to mark last week’s high, and after this week’s open, prices quickly jumped-back above and we now have short-term support showing at this same level.

This May Not Be the Support to Stage Bullish Plays From

While the trend in GBP/USD retains bullish qualities, the primary qualm at this point would be one of position on the charts, and price action may be setting up for a bullish trap of some kind, as higher-low support off of this key Fibonacci level would be almost too clean for comfort.

As we’ve been following, the simple fact that bulls were able to make ground above 1.3117 indicates their ability to continue driving-higher on the charts. And this can keep the door open for topside strategies, but traders would likely want to wait for a deeper pullback to a more adequate level of support that can open the door for more reasonable risk management mechanisms. The same zones that we looked at on Monday week apply, and we have two zones of support interest underneath 1.3117.

The first of these zones runs from prior swing highs/lows around the level of 1.3034-1.3065, and a bit below that, we have another support zone that runs from the prior swing point of 1.2962 up to the psychological level of 1.3000.

Given the dynamics around Brexit and, in-turn, GBP price action, we’d be remiss if we didn’t explore the other side of the argument at this point.

As we pointed out in late-August, the primary push point here appeared to be those comments from the EU’s Chief Negotiator; and as we alluded to, this helped to shift the trend in the pair. But – this is a liquid situation, and we’re far from out of the woods yet, so there does remain bearish potential particularly if those Hard Brexit fears come back to light. Given some of the negative comments that have shown so far on the day, this may have some potential over the next couple of weeks.

Going along with this thesis around reversal, we previously pointed out a rising wedge formation in GBP/USD. This is marked by higher-highs, but higher-lows coming in at an even faster pace. This type of formation will often be approached for reversal qualities, expecting the lack of enthusiasm at highs to, eventually, show-through to support. This morning’s volatility in GBP/USD has pushed prices below the support side of that formation, and this could be the very early stages of a possible bearish reversal in GBP/USD.

This is still early, and bearish themes would likely need some additional help from even more negative headlines around Brexit, which at this point certainly seems like a possibility; so this is something traders would want to keep a watchful eye on until more down-side pressure is seen in the pair.

For those looking to get bearish, a test below the 1.3000 psychological level could show that we’re seeing a shift in price action pronounced enough to have reversed the entirety of the past week of gains, and that could make the prospect of a deeper sell-off begin to look more likely.