- GBP/USD has finally run into some element of support, as taken from the 23.6% retracement of the ‘Brexit move’ in the pair. This is the same study from which the 78.6% retracement helped to mark the top in April of this year. Four months and 1,700 pips later, support is starting to show on a shorter-term basis. The big question is for how long this might be able to hold.

- The longer-term trend in GBP/USD remains bearish. But with price action so stretched to the downside, showing oversold RSI readings on both Daily and Weekly charts, combined with a big level of long-term support, the backdrop appeared open for counter-trend positions as we looked at in our FX Setups for the Week of August 20, 2018.

It’s been a rocky past four months for the British Pound. As we came into the month of April, the prospect of rate hikes and tighter policy out of the Bank of England kept the currency strong. This was driven in-large part by the stronger rates of inflation that had developed in the UK following the ‘sharp repricing’ in the currency following the Brexit referendum; and the fact that inflation remained above 3% for five consecutive months as we ended 2017 and started 2018 kept the door open for a bigger-picture shift at the BoE.

But that strength has largely went missing since mid-April, as GBP/USD topped-out at the 78.6% retracement of the Brexit move, and prices have yet to recover since. At this stage, we’ve seen more than 1,700 pips come off of GBP/USD’s price, and last week finally brought some element of support after a very visible bearish theme has continued to push the currency throughout the month of August.

The Down-Trend Hastens, Can Bears Continue to Push?

The down-trend in GBP/USD has appeared to hasten so far in August, and making matters more interesting is the fact that the Bank of England hiked rates for only the second time in the past decade at the beginning of the month. While higher rates and tighter policy will normally be currency positive, expectations are crucial, and the Bank of England was so incredibly dovish at that last rate decision that market participants decreased expectations for future hikes out of the BoE. And – when we consider the fact that a very opaque scenario around Brexit will come further into light in the coming months as the EU and UK get nearer to Brexit negotiations, and there’s actually a reason to believe that the BoE may need to get dovish in the coming months; or at least the bank had inferred as much when discussing the negative impact that a ‘Hard Brexit’ scenario might bring.

As we wrote earlier in the month, that dovish tilt at the Bank of England removed one of the few reasons to be bullish on the currency; and after that rate hike GBP has spent much of the time since selling-off.

We looked at selling GBP/USD last week in the article entitled, GBP/USD: Cable Attempts to Carve Out Support, But Can it Hold? We looked to use two different price zone for potential resistance, and after a quick wick saw prices turn-around in the first of those zones, the sell-off in GBP/USD continued down to fresh yearly lows.

But shortly after that happened another item of interest popped-up, and that’s a long-term support level that’s helped to stem the bleeding. This price of 1.2671 is the 23.6% Fibonacci retracement of the ‘Brexit move’ in the pair, and this is the same study from which the 78.6% retracement helped to mark the top in April. Since this level has come into play, bears have been losing control and buyers appear to be gaining more ground: We looked at the prospect of a Cable retracement as part of our FX Setups for the Week of August 20, 2018; and in that we were looking for prices to return to that same zone that had previously offered resistance from 1.2817-1.2846.

While the longer-term trend remains down, the pair is still showing oversold conditions on longer-term charts, and this could lengthen the shorter-term retracement that’s started to show since support came into play.

Echoing this thesis is the fact that IG Client Sentiment remains net long on the pair, alluding to the potential for continuation of the longer-term bearish theme; but we’ve seen this indicator continue to get less ‘net long’ since that support showed last week. This was a similar drive that we had used in July to trade the counter-trend theme in GBP/USD up to 1.3200. So – this could mean a short-term situation of potential strength, even in consideration of the longer-term bearish theme. 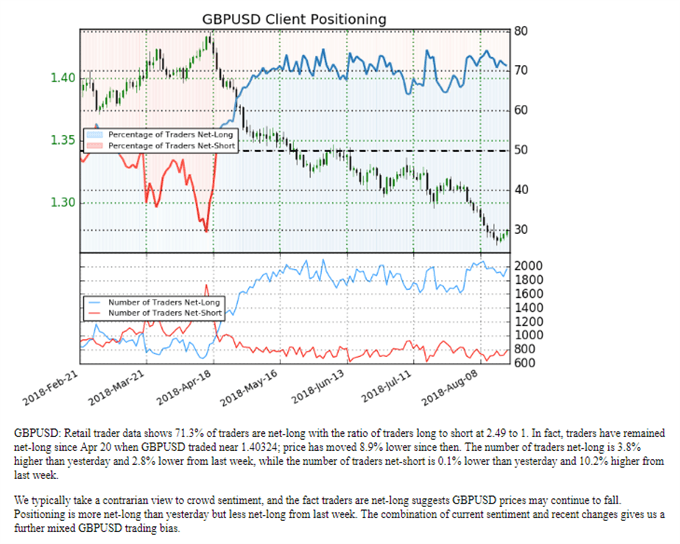 For the longer-term trend, the big question is when bears might jump back-in. On the chart below, we’re looking at the same ‘r2’ zone that we’ve been following over the past couple of weeks, and if this short-term bullish theme could move all the way up to the zone that runs from 1.2918-1.2956, the door could soon re-open to bearish strategies.