- European Commission President Jean-Claude Juncker said that the EU and UK remain “far away” on a Brexit deal.

- Meanwhile, UK PM Theresa May once again staved off calls for a second referendum.

- The negativity piled on a few minutes later, when Irish Prime Minister Leo Varadkar said that the sides remain “no closer” to a deal than they were “in March.”

The British Pound has erased all of its gains on the day after a series of disconcerting comments made by various European politicians connected to the Brexit summit taking place this week. All of the commentary were made in the span of a few minutes of one another, so the aggregate impact on various Sterling crosses may have initially amplified.

Needless to say, the tone struck by both officials runs counter to the remarks made by the EU’s chief Brexit negotiator Michel Barnier in recent days, who suggested that an agreement in the coming weeks. But with EU President Donald Tusk still eying a November summit to iron out the final details of an agreement, we surmise that Messrs Juncker and Varadkar are simply trying to motivate policymakers to not get complacent.

Today’s commentary does not suggest that there has been a material downgrade in the prospect of an agreement being reached, because, as UK Prime Minister Theresa May said earlier, there will not be a second referendum as things currently stand; the UK will Brexit, it just depends if it’s the ‘soft’ or ‘hard’ variety. 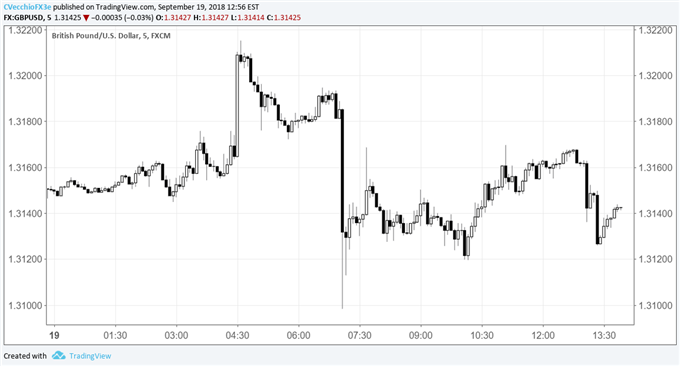 Following the round of commentary, GBP/USD slipped back from near its US afternoon session highs around 1.3168 to as low as 1.3126 in just under 30-minutes. By the time this report was written, GBP/USD had recovered back to 1.3143. Similar price action was observed in other major GBP-crosses, with EUR/GBP initially rallying before falling back, and GBP/JPY falling before retracing the initial reaction lower.