Signs of a stabilizing China and improvement in European growth prospects have helped cushion what has been deteriorating risk appetite this week. Mainly, global concerns have been manifested in the form of collapsing emerging markets, which has boosted those currencies with strong short-term growth momentum like the British Pound.

The calm developing, however, hasn’t necessarily made its way into FX markets. The Australian Dollar is the only currency to outperform the US Dollar today, though gains have been difficult to hold on to. Similarly, signs that the Euro-Zone may stay out of recession in the 3Q’13 haven’t produced a stronger Euro. In both of these cases, it is due to the turn in the US Dollar.

The release of yesterday’s July FOMC Minutes proved to be more ‘boom’ than ‘bust,’ as the Federal Reserve policymakers have made it abundantly clear that they are seeking to taper QE3 sooner than later.

This belief is largely predicated on the notable shift in the inflation discussion – more were concerned than at the June meeting that the upswing in US growth prospects would push inflation back to the Fed’s +2% medium-term goal sooner than later. Layering concerns in over asset bubbles in global equities and sovereign bonds, a clearer picture shows the stars are indeed aligning for a ‘Septaper.’

Taking a look at European credit, peripheral bond yieldshave continued to leak higher as European equity markets have struggled the past few days, proving to be a further negative influence on Thursday.Should this relationship persist – weaker credit and equities – the Euro could face increased pressure over the next several sessions. 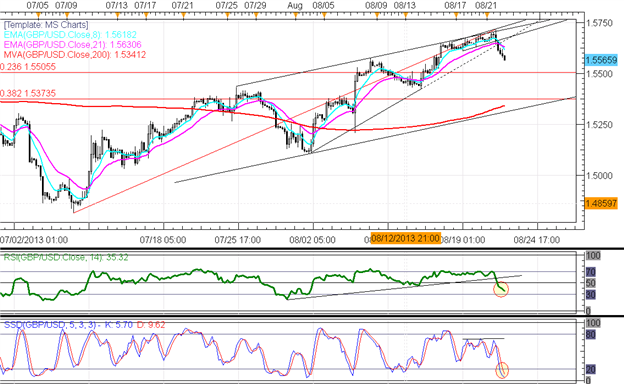 GBPUSD (H4) – This week I’ve said: “The pair continues to impress since early-July but there are signs of near-term exhaustion developing.…in between $1.5720 and 1.5760 this week.” Now:

- A Bearish Rising Wedge has developed off of the August 2 and August 13 lows.

- The downturn is confirmed by both the H4 and daily Slow Stochastics (5,3,3) dropping out.

- The H4 RSI uptrend off of the August 1 and August 13 lows has broken to the downside.

- The H4 indicators have hit/are nearing oversold conditions, suggesting that a bounce may be coming soon, which would look to be sold.