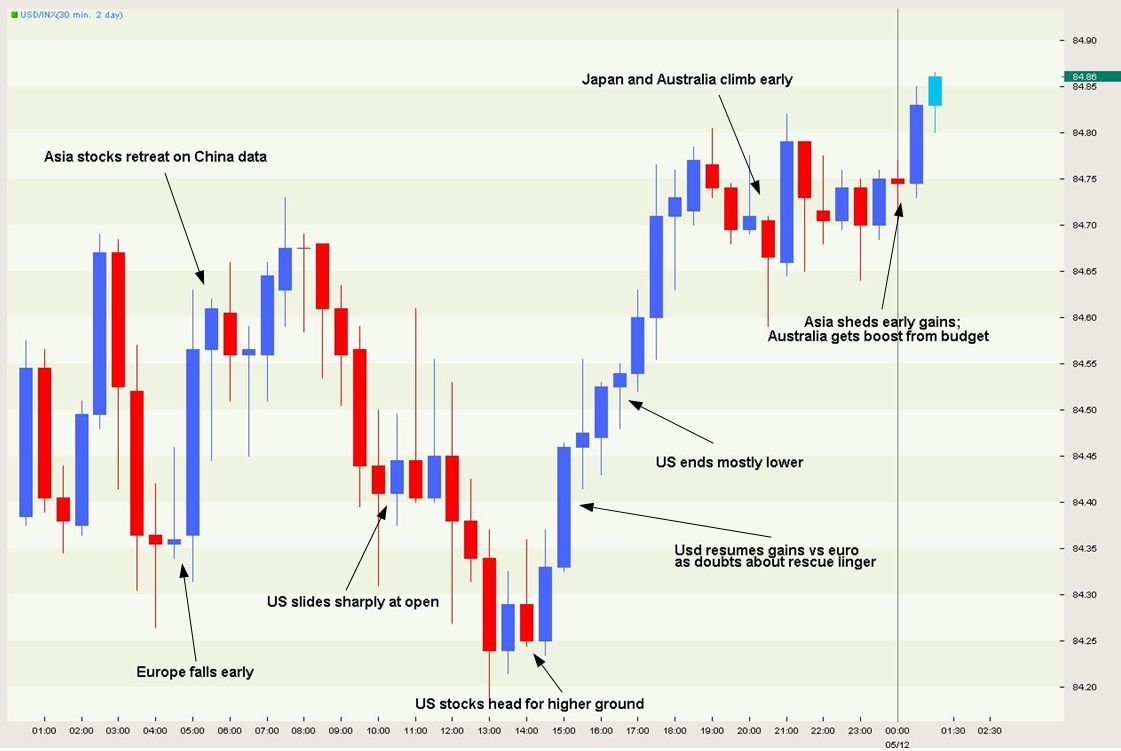 2010-05-12 10:39:00
Joel Kruger, Technical Strategist
Share:
MORNING SLICES
FUNDYS
It is still way too early to call for a full fledged return to risk buying on Wednesday, but there have been a number of developments which could help to garner additional positive momentum.
Relative Performance Versus USD on Wednesday (As of 10:25GMT) –

1) CAD        +0.51%
2) KIWI +0.27%
3) SWISSIE        +0.15%
4) AUSSIE +0.06%
5) EURO +0.05%
6) STERLING -0.17%
7) YEN          -0.28%
The Euro has been sold quite heavily since topping out by 1.3100 a few days back, but now seems to be having a hard time breaking back below 1.2600 and retesting the recent 1.2530, 2010 lows. Perhaps a better round of data including some solid German and Eurozone GDP figures, along with the talk of Spanish austerity measures, has helped to keep the single currency supported thus far on the day.
While most other major currencies have been tracking higher against the buck ahead of the North American open, both the Yen and Pound have been lagging. Understandably, the pick up in risk appetite can be attributed to the Yen weakness, but Sterling underperformance has all been due to local developments. Initially, the currency had been well bid following a healthy and better than expected unemployment data result, but a very dovish BOE inflation report, and equally downbeat comments from Governor King, proved too hard to ignore. The inflation report still saw risks to the downside, while King said that he was very concerned and that the banking crisis has now evolved into a “sovereign debt headache.” King also added that he would not rule out the possibility for additional asset purchases.
Elsewhere, Eur/Chf has seen an up-and-down session of trade with price action on the cross still quite volatile since the SNB pulled their bids at 1.4300. Bulls have been playing the long side on the back of some oversold technicals and hopes for additional central bank intervention, while bears continue to stick with the dominant trend and fail to be threatened by the currency intervention, targeting stops below 1.4000. SNB Hildebrand has come out in recent hours reaffirming that the central bank will not allow an excessive appreciation of the Franc.
Technically however, it now looks as though there is a lower top in Eur/Usd by 1.3100, which will be confirmed on the break below the current 1.2530, 2010 lows. Talk of hyperinflation, a round of currency devaluations, and another depression have all helped to keep most traders from aggressively buying currencies and despite today’s minor bounce, market participants seem to lack the necessary trust and reassurances needed to comfortably exit their long USD positions.
Interestingly, we have been seeing a breakdown in correlations between currencies and equities, with the currency markets continuing to warn of ongoing stresses and fears over the state of the global economy, as evidenced through the broad based USD bid tone. Meanwhile, global equities have been trading more optimistically over the past few sessions and seem to be interpreting things differently. In our experience, the currency markets are usually more on the ball and forward looking. Look for equities to come back under pressure on Wednesday, should we continue to see USD demand. It seems as though the marginally lower close in the DJIA on Tuesday, solid corporate earnings and surging metals prices (gold to yet another record high), have all helped to prop equities, but we are not convinced this will last.
Looking ahead, mortgage applications are due at 11:00GMT, followed by Canada international merchandise trade (1.6B expected), and the Canada new house price index (0.3% expected) at 12:30GMT. Also out at 12:30GMT is the US trade balance (-40.0B expected). Oil inventory data is then out at 14:30GMT, with the monthly budget statement capping things off at 18:00GMT. On the official circuit, Fed Rosengren speaks in Atlanta at 14:15GMT, with Fed Lockhart following a little later at 16:30GMT.  US equity futures have recovered and now point to a higher open, while oil has also recovered back to opening levels. Meanwhile, gold remains impressively well bid at record highs.
GRAPHIC REWIND

TECHS
EUR/USD: The acceleration of declines since breaking below 1.3000 has been intense and the market has now easily broken below what was next support by 1.2885 to trade just shy of 1.2500 thus far ahead of the latest bounce. While our overall bias remains extremely bearish on the pair over the medium-term, daily and weekly studies are in the process of undergoing a very much needed and healthy consolidation. However, a lower top could now be in place by 1.3100 ahead of the next fresh downside extension below 1.2530. In the interim, we remain sidelined.  Key levels to watch over the coming session come in by 1.2800 and 1.2530.
USD/JPY: The whipsaw price action from last Thursday’s violent trade has delayed our outlook but certainly does not change our overly constructive bias. The medium-term higher low from early March just over 88.00 remains intact, with the market stalling out ahead of the level, and we now look for a push higher from here back towards and through next key topside barriers by 95.00. Only a break back below 88.00 would negate and give reason for pause.
GBP/USD: The market has finally taken out the key 2010 lows by 1.4780 to confirm a fresh medium-term lower top by 1.5500 and open the next major downside extension towards next critical psychological barriers by 1.4000 over the coming weeks. At this point however, with daily studies looking stretched, we would not rule out the possibility for additional consolidation in the 1.4750-1.5000 are before considering a bearish resumption.
USD/CHF: The overall outlook remains highly constructive and while daily studies do not rule out the possibility for some additional short-term consolidation to allow for technicals to unwind, any setbacks should be very well supported ahead of 1.0900, in favor of an eventual push into the 1.1500-1.2000 area. Back above 1.1245 opens next upside extension.
FLOWS
Real many and sovereign sellers in Eur/Usd. Barriers eyed by 1.4000 in Eur/Chf. Spec offers in Usd/Cad; local demand on dips toward parity.
TRADE OF THE DAY
No Trade: Nothing new on the radar just yet. We will send out an email if anything develops.