See how retail traders are positioned in the GBPUSD, EURGBP, GBPJPY along with other key FX pairs, indices and oil on the DailyFX Sentiment page.

GBPUSD put in for its largest weekly reversal since the closing period of 2018. The low plunged through Tuesday pushed them pair to its lowest point since the post-Brexit flash crash back in October 2016 and came dangerously close (within 0.4 percent) to notching a new three-decade low on this benchmark pair. What’s more, this was a move that was not isolated to the Dollar-based cross. In other words, the pressure was on the Sterling generally and not simply a reflection of Greenback strength. The distinction is an important one if you are measuring where intent will form for a pair like the Cable or its many cousin crosses.

With the market at risk of tipping into the depths of extreme technical boundaries that would require extension indicators or a monthly chart to establish next levels, a ray of speculative light came through the second half of this past week. A more-than-three percent rally from the Cable offered a significant cushion to the bearish gravity that had built up and in turn hurdled more immediate technical boundaries that defined the bearish momentum of the past months. As can be seen below, the six-month descending trend channel and 50-day moving average that ushered the market lower broke to relieve pressure – though I wouldn’t reflect upon this as a self-sustaining reversal in bearing and momentum. 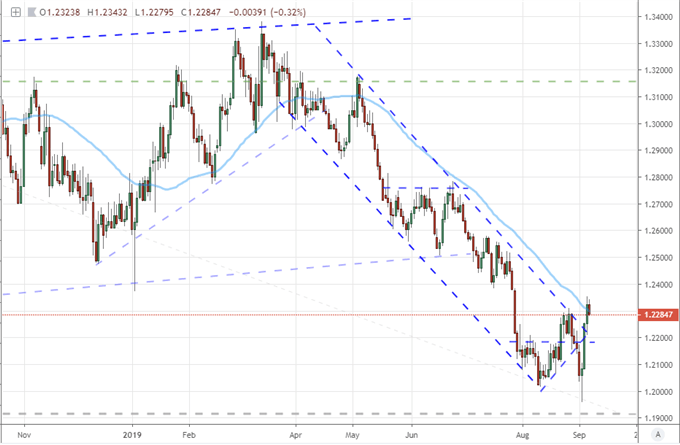 Taking stock of activity levels, there is certainly enough charge to put tempo behind a bullish reversal for the Cable. Backing up the clean technical pattern, there is a rising volatility level measured through the 20-day (1 trading month) average true range – or ATR. The price range for the pair over the same period, however, is still very truncated – though not extreme. If extreme – as in June – a short-term breakout would be extremely likely. Such circumstances can spark a necessary re-establishment of trend, but it is not a necessity. Seeing the range widen with volatility burgeoning is a favorable set of circumstances for setting the stage for a trend. The problem is ‘Brexit’. 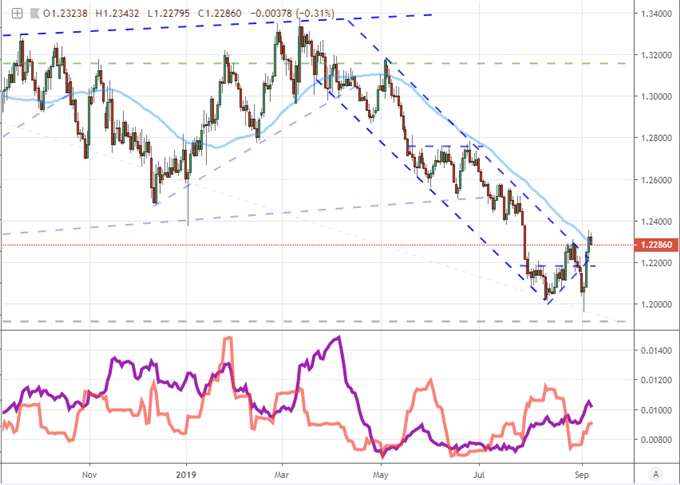 Even technical traders should realize that the bearish pressure on the pound this past half year and the subsequent sharp reversal this past week were all in tied to Brexit headlines. The rising risk of a ‘no deal’ outcome in the UK-EU divorce was building greater and greater pressure. When headlines started to insinuate Parliament efforts were being made to block the financially-burdensome outcome from occurring – at least by the October 31st deadline – the Sterling acted as if it had finally caught a gulp of air. To fully appreciate how much pressure this theme has exerted over the Pound over the past three years, we only need look at a weekly chart. The multi-decade lows and erratic activity at that impromptu floor is principally a reflection of these uncertainties. 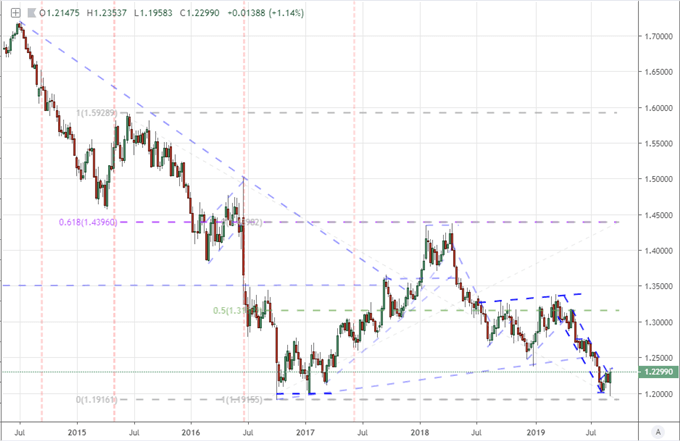 So, from a purely technical position, we have a chart that has made a loaded reversal from extreme depths – and the picture of a coiled spring come to mind. If undisturbed by fundamentals, this would be strong foundation for a large range reversal. Yet, there is little chance of this currency disconnecting from the fundamental uncertainties. Therefore, Sterling traders will need to be mindful of headlines while looking at complementary measures of the fundamental risks. One way to short-cut an overview of the pressure is to consider the implied volatility measure for the Pound generated by the CBOE. This measure of currency-specific fear is inverted below and shows that relief (here a bounce) supports lift from the equally-weighted Pound index. And, with the market this stretched, we don’t need a steady reduction in fundamental fear to earn a recovery from the Sterling. Simply holding back the timed threat could allow productive advance. 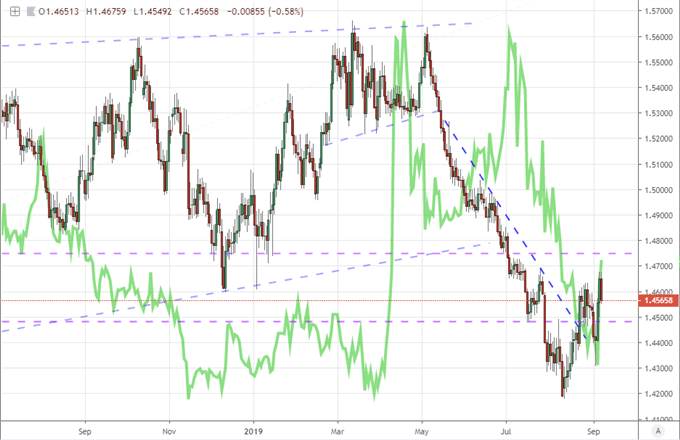 Taking a closer look at the equally-weighted Pound index, we can see its general technical shape is very similar to that of GBPUSD. We have a persistent bear trend (though a shorter one in productive terms) and a reversal pattern. That said, the turn has proven more fruitful than the sudden development for Cable with a pattern that suits a head-and-shoulders pattern – where this past week’s volatility rounded out the shoulder. A relative volatility gauge between the 10-day and 50-day period shows that there is technical charge in the turn effort. That is excitement you would like to see in a reliable turn – building but not manic so as to burn itself out. 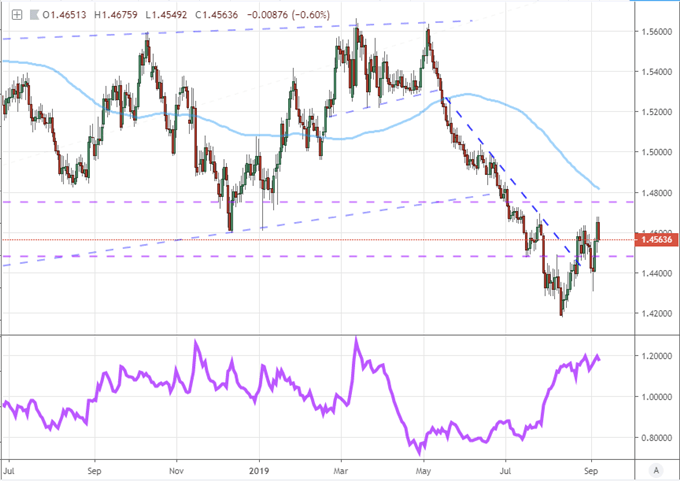 Looking across the GBP-based crosses for interesting patterns, there isn’t a boring chart out there. However, beyond Cable, the next benchmark in the currency’s list, EURGBP, has a large range of its own and has reached far deeper into its reversal. This has a lot to do with an active Euro. We will have a high-level disruptive fundamental event risk in the upcoming week in the form of the ECB rate decision. Don’t underestimate what that can do in terms of volatility and direction, but this pair’s bearing will influence the general Pound view substantially. 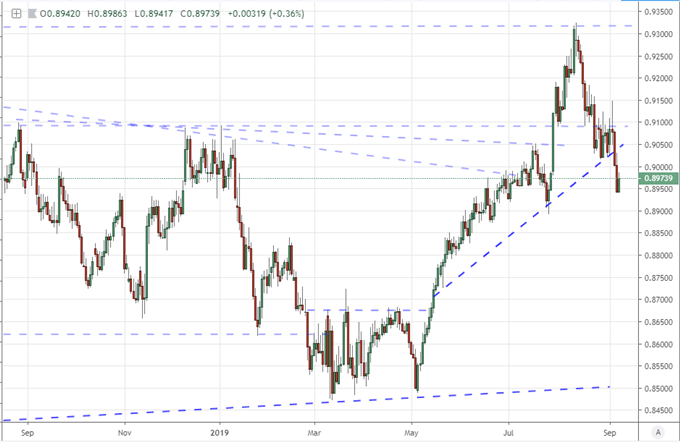 Another interesting Pound pair to consider is the GBPCAD. This chart looks a lot like GBPUSD – and for good reason. If you look at USDCAD, its lack of progress would insinuate that the two Sterling pairs based of its components would look very similar. Indeed they do. However, there is nothing that suggests that CAD has to move in tandem with USD, and the latter is dealing with quite a bit of fundamental uncertainty of its own that could knock that pair off kilter. The trend channel and subsequent head-and-shoulders pattern here are far more crisp. So long as the Brexit situation not take a painful turn for the worse, I will be eying this for bullish intent. Furthermore, since the ‘clear break’ wasn’t established in last week’s volatility, we would need further follow through in the form of a 1.6350/6400 break which can provide some further conviction. 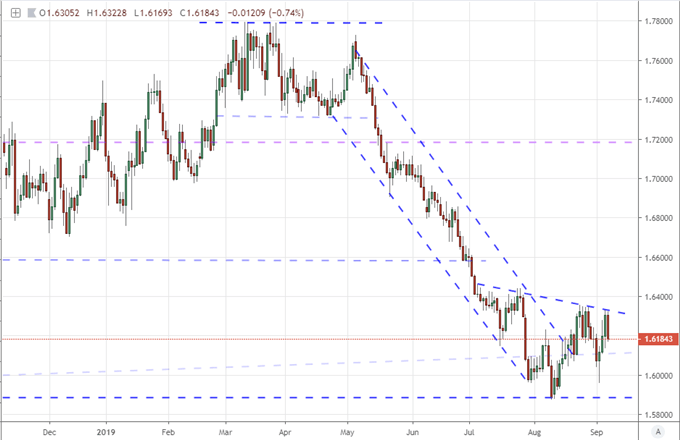 In terms of speculative positioning, there is clearly a market ready to commit to the technical reversal so long as the fundamental troubles swoop back in. From the longer-term futures traders, we find net speculative positioning has just rounded up from a retest of its record net short position – enticing but don’t draw to direct a conclusion from the similarities from early 2017. As for retail traders, their aggressive contrarian view is finally starting to ease back. It is worthwhile to note that the ratio of long positioning never exceeded May’s peak despite the fulsome decline. 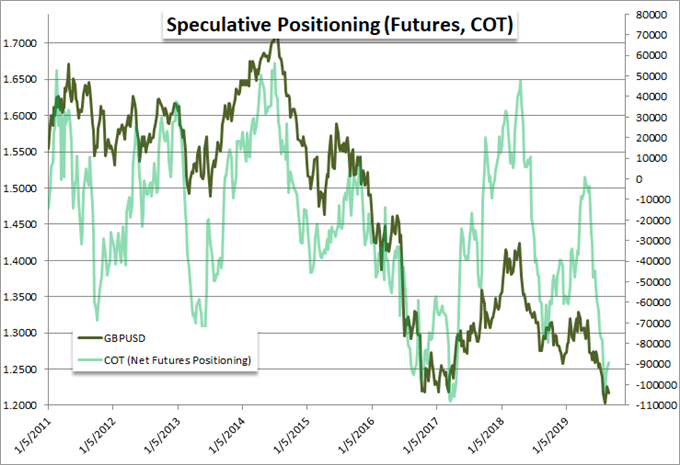 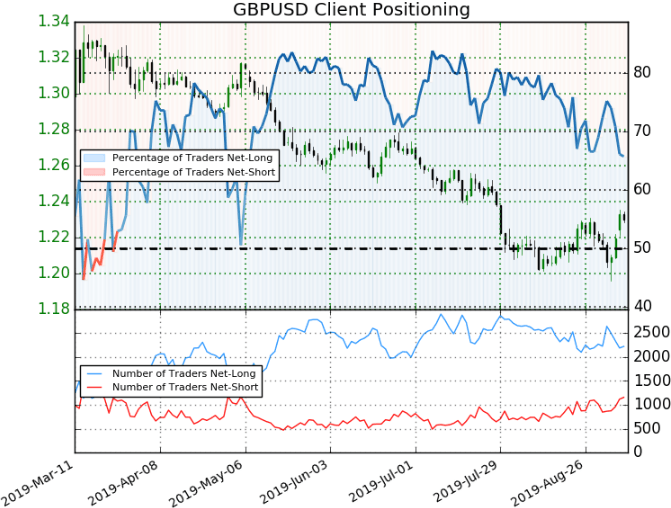