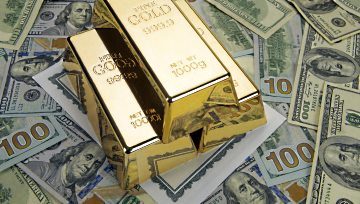 The outsized bullish move in Gold prices that showed through June trade has finally found some element of resistance. As looked at earlier this week, Gold prices have started the build of a symmetrical triangle as a long-term zone of resistance has come into play from prior six-year-highs. Buyers haven’t yet thrown in the towel, as the initial pullback from that resistance zone has been followed by a continuation of higher-lows on the chart; and yesterday produced a short-term support inflection at a key area that was looked at earlier in the morning around the 1400 psychological level.

Taking a step back, and that recent build of a symmetrical triangle is coupled with the very strong move from the month of June. Collectively, this makes for a bull pennant formation, which will offer a directional bias to this recent round of digestion. This can keep focus on the long side of Gold prices, particularly for traders that are looking for an extension of US Dollar weakness after the initial move towards more-dovish policy out of the Federal Reserve.

While bullish continuation potential remains on a shorter-term basis, traders with longer-term views may still want to wait for a deeper pullback. The zone of resistance that was encountered in late-June that ultimately ended up quelling the advance comes-in from prior six-year-highs, coupled with a Fibonacci level from a longer-term major move. This zone spans from 1421 up to 1433; and since this came into play Gold prices have continued to post lower-highs upon tests of resistance. This can allow for a deeper pullback to zones with longer-term support potential; such as the area around 1375, which lines up with the 2016 swing-high or perhaps even as deep as 1357.50-1366 (the 2017 and 2018 swing highs).

A deeper pullback to either of these zones can re-open the door for longer-term bullish strategies in Gold.

The Attraction of Bigger-Picture Bullish Biases in Gold

Taking a further step back, and there’s a reason that so many are looking at the bullish side of Gold prices on a longer-term basis. From a fundamental perspective, it doesn’t appear as though there are many major Central Banks near rate hikes. As a matter of fact, should the Fed cut rates at their July rate decision, this could open the door for even more softening out of the US Central Bank. The Fed would, at that point, join all of the ECB, the BoJ and the PBoC that are in or investigating some form of softer monetary policy. This is also part of the reason that Gold prices exploded last month: As the Fed halted their hawkish approach last year, Gold prices began to firm, but that theme didn’t really hit fever pitch until the Fed appeared to begin to the process of capitulation in early-June.

This could possibly make for a backdrop that would be roughly similar to what happened in the aftermath of the financial collapse, when global Central Banks were all cutting rates and looking to get looser in the effort of shoring up the economic that pain that had showed. And while that same level of pain has not recently been witnessed, Central Banks are clearly trying to remain in-control to ensure that it doesn’t, and the quickest way to make that happen is by softening the economic backdrop via lower rates and softer policy.

So, last month’s breakout not only makes sense given underlying dynamics but may also be the start of a new theme in Gold prices that could be around for a while. The big question is whether the Fed will actually deliver and, if they do, will they keep the door open for more cuts down-the-road?