Crude Oil: After Bull Flush Out, Bounce Likely In Play

You’re in luck, DailyFX’s Q1 2019 Crude Oil Forecast Was Just Released. You can access it here

The crude oil price has staged quite the turnaround at the start of 2019. While the slide in prices seems relentless in November, we were keeping an eye on an extreme level in the low $40/bbl region. The reason for this focus is that the lower-$40/bbl. region was a key pivot point in 2016 and 2017, and time will tell if this area will play the pivot again.

Traders continue to focus on the tailwinds for crude’s bounce in 2019 as black gold is hoping to rebound from its worst year since 2015. Crude has been moving alongside risk sentiment, which has also soured lately, but supporting points for a crude bounce appear to be rebuilding.

First, the US Dollar, which tends to be inversely correlated to crude seems to be has been steadily lower toward the year’s open. Powell’s comments on Friday that the Fed will be patient and prepared with flexible policy prompted traders to see less potential upside for the USD.

Lastly, a reversion to the mean after an extreme downside move in crude and positioning could very well et the tone for an improved posture and a bounce in the early weeks of 2019. The December 24 low will likely be a place where bold bull’s or tactical bounce-playing bears will set their stops at $42.43/bbl while targeting $55.57/bbl., which is the 38.2% retracement and the January 2017 high. 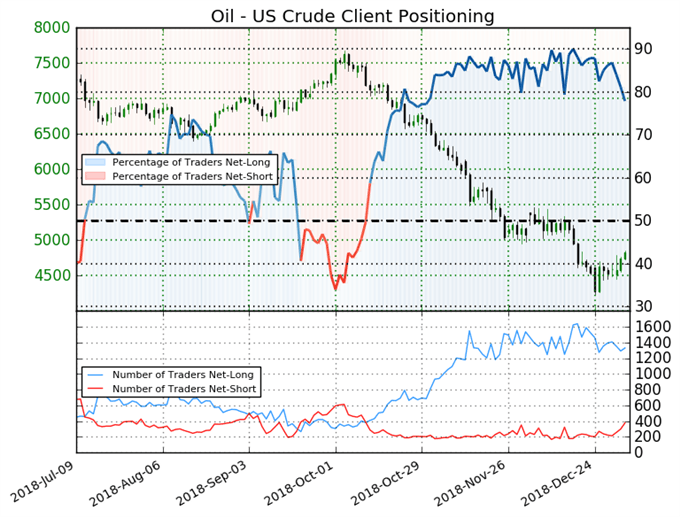 Traders have remained net-long since Oct 11 when Oil - US Crude traded near 7344.7; price has moved 34.2% lower since then. The percentage of traders net-long is now its lowest since Dec 12 when it traded near 5149.5.

Traders are less net-long than yesterday and compared with last week. Recent changes in sentiment warn that the current Oil - US Crude price trend may soon reverse higher despite the fact traders remain net-long(emphasis mine.)