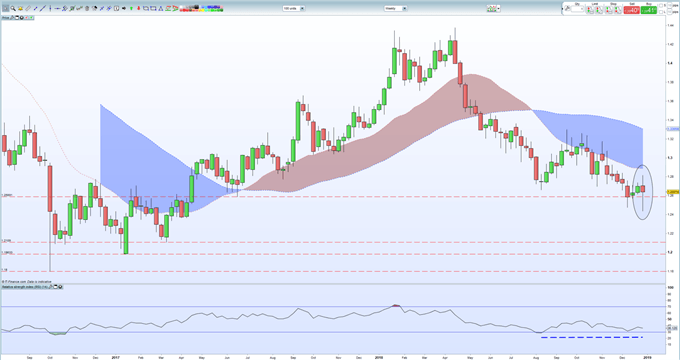 We have recently released our Q1 2019 Trading Forecasts for a wide range of Currencies and Commodities, including GBPUSD with our fundamental and medium-term term technical outlook.

The daily chart is showing a potential bearish engulfing candle being built towards the end of the week - a negative chart set-up – despite the pair nearing oversold territory, using the RSI indicator. While this week’s moves have been primarily driven by the US dollar, the lack of interest/strength in Sterling is worrying for bulls, especially ahead of the Brexit vote, w/c January 14. The weekly chart shows the upside capped by the bottom of the 20-/50-day moving average cloud just below 1.2900, a level last seen in mid-November 2018.To the downside a re-test of the 1.2435 print is possible but further falls may be tempered with the March 2017 low at 1.2109 unlikely to be troubled, all things being equal. With the Brexit vote on the horizon, Sterling positioning may be reduced adding a touch of short-term volatility into the mix.

On the daily chart, the 20-day moving average is providing short-term resistance and may be enough for the pair to sink back below 1.2600. Wednesday’s outsized candle – 1.2435 to 1.2775 – should provide the trading range for the near-term with current price action favouring a re-test of the lower bound. 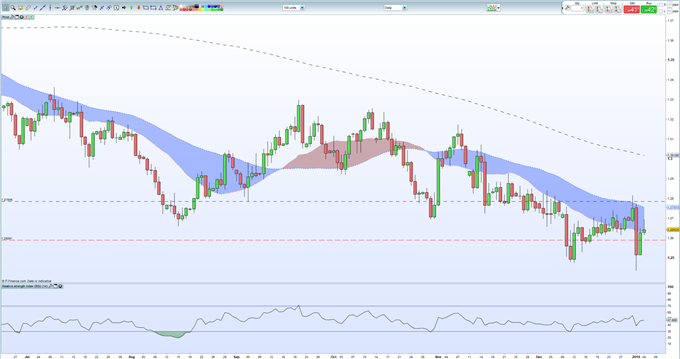 Fundamentals are also Sterling neutral to negative with PM May’s contentious Brexit bill up for further discussion next week with a strong chance that it will be rejected when voted on w/c January 14. The US dollar has also just kicked bears into the long grass after a strong Labour report, while the latest UK services PMI points to tepid growth of just 0.1% for the UK in Q4.