Generally the Australian Dollar experienced broad weakness in its final moments of 2018 as anticipated, that may change as 2019 is underway. In the aftermath of last week’s flash crash as a result of Apple slashing revenue projections, AUD has set itself up for bullish reversal attempts in the week ahead. Starting with AUD/USD, we now have a Morning Star reversal pattern on the daily chart.

This formed after the pair dived through 2015 and 2016 lows, temporarily touching 2009 lows before trimming losses in very illiquid trading conditions. Friday saw AUD/USD rise by the most in one day since November at about +1.62%. Not only did this complete the Morning Star, but a push was made above a near-term descending resistance line from December.

This also occurred amidst positive RSI divergence which signaled fading downside momentum. With that in mind, we may see the Australian Dollar clock in gains against the greenback. As it stands, the pair sits just below a range of resistance between 0.71645 and 0.71452 which includes lows from December and May 2016. Climbing above this area may open the door to testing the descending resistance line from July. 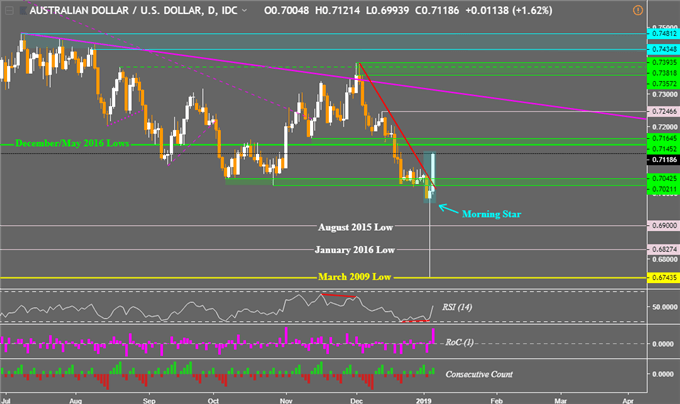 A similar story unfolded in AUD/CAD in recent days. The flash crash resulted in the pair briefly touching 2013/2015 lows as anticipated via my top trading opportunities in 2019. In addition, the decline occurred after the formation of a bearish Head and Shoulders reversal formation pointed out back in December. This does leave AUD/CAD attractive from a bearish perspective.

After the impressive performance in the Aussie on Friday, AUD/CAD rose but still found itself under the neckline of the Head and Shoulders pattern around 0.95548. I believe that this still leaves it biased bearish from a longer-term technical perspective. If the Aussie outperforms this week, I would watch for a daily close above the descending range of resistance from the head of the candlestick pattern. A close above that opens the door to testing resistance next around 0.96696. Otherwise, downtrend resumption has 0.93266 eyed as support. 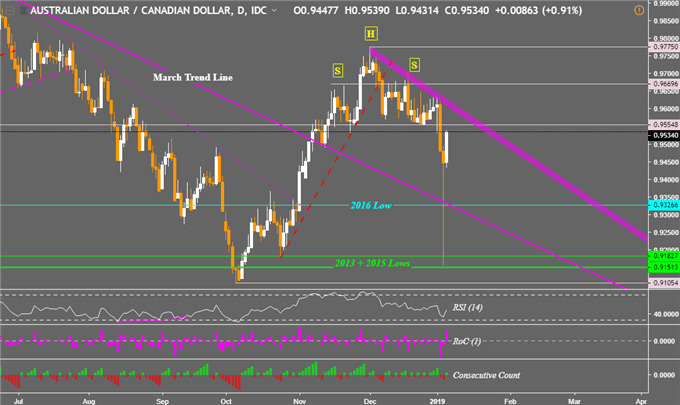 Meanwhile EUR/AUD prices may be on the verge of overturning the dominant uptrend from December. The Shooting Star candlestick was followed with the most aggressive decline in the pair on a daily basis since October 2016. In addition, EUR/AUD also closed under a near-term rising support line from December. This does leave the pair sitting right on top of a horizontal range of support between 1.60128 and 1.59855.

Opposite in what we saw in AUD/USD, we had positive RSI divergence precede the pair’s intense drop. A close under support may confirm prospects of a bearish reversal. That would open the door to testing 1.58806 followed by 1.57141 next. Meanwhile resistance appears to be the peak of the Double Top bearish reversal pattern seen back in the final two quarters of 2018 which is around 1.63544. 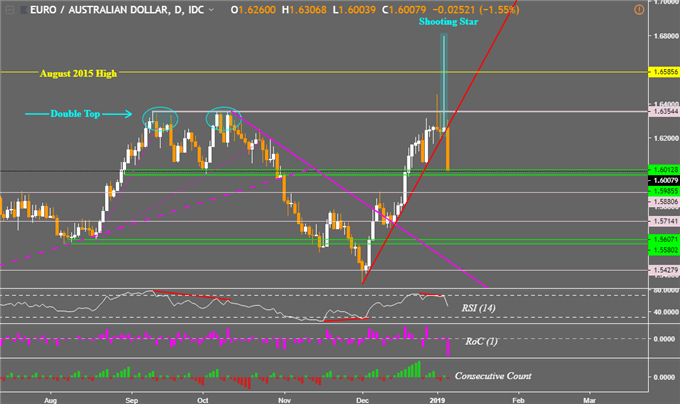