NZDUSD has consistently traded lower in recent weeks and now trades below resistance from the trendline originating on December 4th. The head and shoulders pattern sent the pair lower and after a strong Friday performance, the Kiwi looks poised to test the trendline next week. A failed test would serve as strong confirmation for a sustained move lower and continuation of the recent trend. 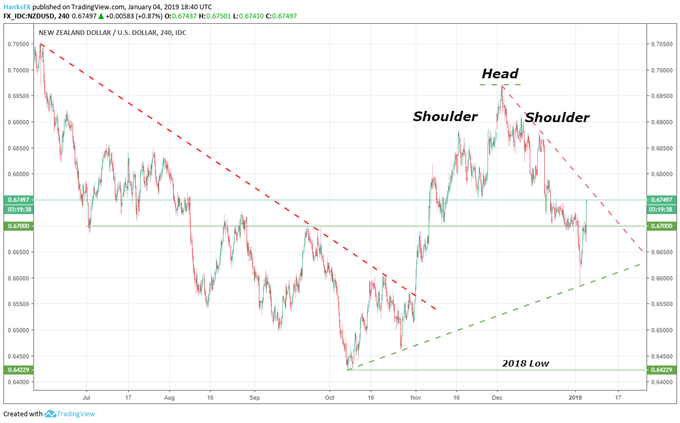 A failed test would also serve to strengthen the resistance moving forward. To the downside, support is building from the lows in October and the recent bottom from Wednesday’s Yen flash crash. While still in early stages of development, the line should be watched as it converges with the resistance line from early December.

See our first quarter forecasts for NZD, USD, CAD and other currencies with the DailyFX Trading Guides.

Another price point to watch in the week ahead includes 0.6700, a round number that has provided moderate support and resistance in the past six months. Coupled with nearby resistance from the December 4th trendline, a break below 0.6700 could serve to drive the pair lower in earnest. Another Kiwi cross to watch is NZDCAD. My Twitter followers will know I have eyed the pair for some time, particularly while it was range bound. You can follow me on Twitter for updates on the pair at @PeterHanksFX. A break from the range on Wednesday now presents an interesting technical landscape with the lower bound serving as resistance. 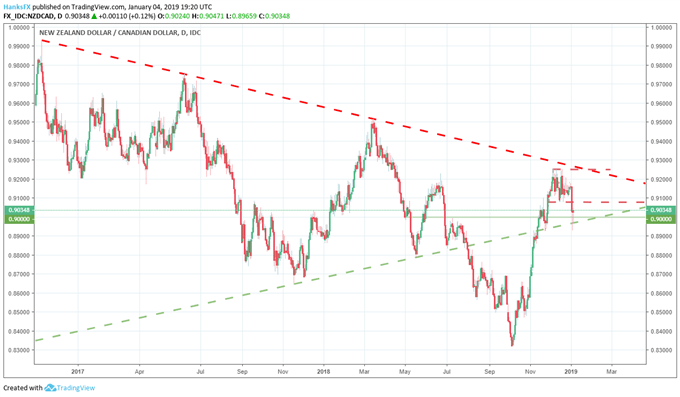 Immediately below that, a trendline from 2009 will serve as near-term support. Two long tails on Thursday and Friday suggest bulls are not ready to surrender the technical level but a break below in August confirms it can be done. As the line approaches the lower bound of the recent range, around .9078, the pair will run out of room and face multiple resistance levels.

Above the lower bound level rests resistance from November 2016, a trendline that has held since its inception. Given the respect commanded by the trendline and the recent inability to break above the range, my technical forecast for NZDCAD is bearish and foresee it proceeding lower in the coming weeks.