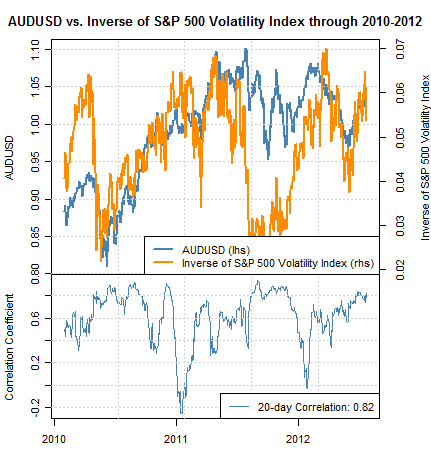 The correlation between the S&P 500 Volatility Index (VIX) and AUDUSD has nearly never been stronger, and a potentially significant breakout in the VIX gives us a bearish AUDUSD bias.

The so-called ‘Fear Index’ rises when investors fear major moves in US stock markets and turbulence across broader financial markets. Sharp concerns can high-yielding Australian Dollar against the safe-haven US Dollar (ticker: USDOLLAR).

The correlation between the VIX and USDOLLAR trades near record-strength. We expect that the S&P 500 Volatility Index (VIX) may continue to guide the Australian Dollar and USDOLLAR through near-term trading.

The correlation between the Australian Dollar and the S&P 500 Volatility Index (VIX) trades near record strength, underlining the fact that the Aussie currency remains extremely sensitive to broader market volatility. Last week we argued that exceedingly low S&P 500 volatility levels favor AUDUSD strength. Yet the VIX recently jumped to its highest levels since the end of June—limiting the appeal of Aussie Dollar longs.

Where do we go from here? A simple look at recent S&P VIX moves shows that the ‘risk’ barometer broke above a minor falling trend channel connecting the June 4, June 13, and July 12 highs. The break higher suggests that the VIX could continue to rally from here, and correlations imply that further VIX gains would likely coincide with AUDUSD declines.

A look at the US Dollar (ticker: USDOLLAR) itself suggests that the Greenback stands to gain further on a challenge of key resistance. Correlations likewise show that the USDOLLAR itself is extremely correlated to the VIX—underlining forex sensitivity to broader market moves. It remains critical to watch price action in the VIX and the S&P 500 Index given fairly clear implications for the Australian Dollar and broader USD pairs. Further VIX rallies could push the USDOLLAR to fresh highs while the AUDUSD falls further from recent peaks.