Investor risk appetite continues to bulge and push the stock market higher. The ongoing ‘V-shape’ recovery put forth by stocks and the US economy has helped fuel a steep rebound in major US equity indices while improving sentiment crushes volatility. Since the Fed announced unlimited QE on 23 March, the S&P 500, Dow Jones, and Nasdaq have gained about 35% on balance.

Broadly speaking, large-cap growth companies have bested their large-cap value counterparts amid unprecedented central bank balance sheet growth with the FOMC printing press on full blast. At the same time, the Russell 2000 Index, a benchmark for mid-cap stocks, has climbed nearly 50% off its swing low. Since stocks bottomed mid-March, Russell 2000 performance, though down about 15% year-to-date still, has outpaced the tech-heavy Nasdaq, which now trades within 1% of its all-time high. 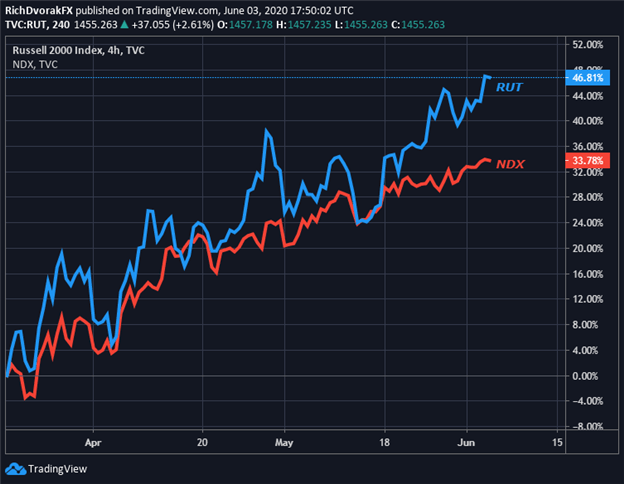 Positive tailwinds from a Fed policy tweak to its municipal lending facility program stands out as a primary driver of recent outperformance recorded by the RUT Index against to the SPX, DJI or NDX. Mid-cap stocks have also soared largely on the back of sustained coronavirus optimism as lockdown restrictions on business activity are lifted and much-needed stimulus reaches relatively smaller business.

As bearish investors capitulate and exacerbate the stock market recovery trade by covering short positions, there is potential for a prolonged rotation of capital out of safe-haven assets into equities, which could help steer the Russell 2000 higher. 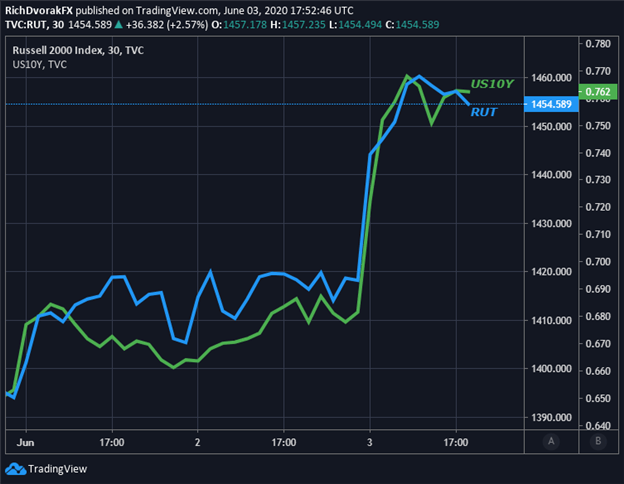 Also, improving economic data, such as better-than-expected ADP Employment Change (a precursor to NFP) and ISM Services/Non-Manufacturing PMI data that crossed the wires earlier today, offer encouraging evidence that the sharpest economic downturn in modern history is behind us.

The latest ADP and ISM reports appear to have sparked a major selloff in anti-risk bonds as the US 10-Year Treasury yield spikes above 0.75% to an eight-week high. Nevertheless, equities still face material downside risks that might spark a major reversal back lower.