Over the weekend, US President Donald Trump shocked markets with a tweet that stated tariffs on $200 Billion of Chinese goods will be raised from 10 percent to 25 percent this Friday. The remarks are said to be in response to US trade negotiators voicing concern that China showing signs of walking back on a possible trade deal.

The blindsiding escalation came as a surprise considering several headlines from the White House proclaiming that US-China trade talks were “going well” with plans for Chinese Vice Premier Liu He to travel to Washington, DC this week for the eleventh round of negotiations. In response to this latest jolt of uncertainty, traders began to sell risk and flock into ‘safe-havens’ while bidding up volatility. 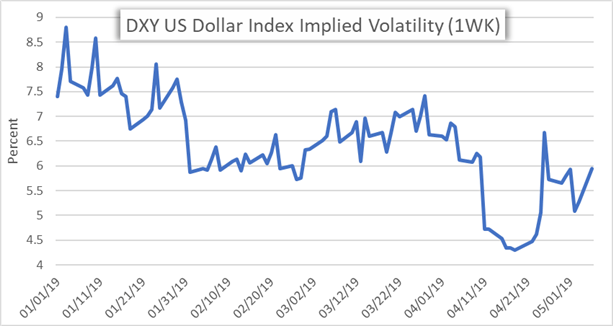 Consequently, the DXY US Dollar Index 1-week implied volatility measure surged to 5.95 percent as the gauge continues to show signs that forex market volatility could be rebounding off recent lows. Price action in the Chinese Yuan also ticked higher with USDCNH jumping the most since 2015 when the CNY was devalued. 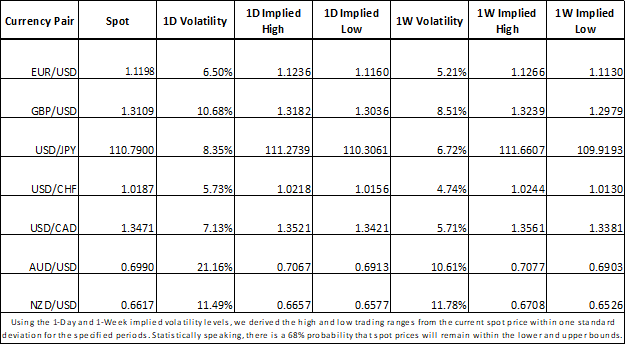 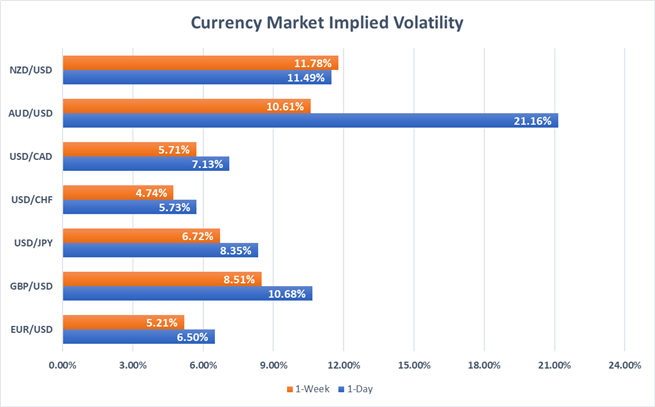 Meanwhile, with the Reserve Bank of Australia on deck to announce its latest interest rate decision, AUDUSD is expected to be the most active currency pair over the next 24-hours with an implied volatility of 21.16 percent which is its highest reading since June 2016. As such, forex traders might expect the Aussie to trade between 0.6913 and 0.7067 with a 68 percent statistical probability. 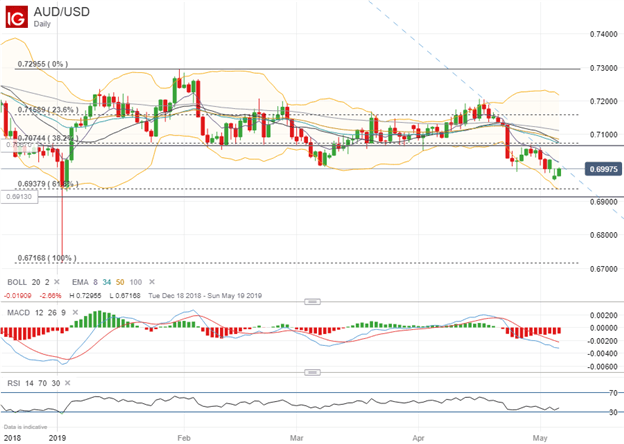 Since the RBA released its March meeting minutes, rate cut bets have accumulated and contributed to the sizable move lower in AUDUSD. Now, overnight indexed swaps are pricing a 46 percent chance that the RBA lowers its overnight cash rate by 25 basis points at tomorrow’s meeting.

If the RBA does in fact cut rates, AUDUSD could potentially target the 0.6900 price level – particularly if trade uncertainty is cited by the central bank as a contributing factor to its decision. Conversely, a firm yet cautious tone from the RBA where the central bank stands pat on rates could bolster the Australian Dollar. Although, upside may be limited by downtrend resistance or further dovishness conveyed by the RBA despite if it leaves rates unchanged.