Apple delivered strong quarterly results after Tuesday’s close, avoiding another miss from a FAANG member after Google missed the day prior. Similarly, AMD beat out Wall Street estimates. As a key player in the semiconductor space, AMD will look to join AAPL in bolstering the Nasdaq after it slumped in Tuesday trading compared to its more diversified counterparts.

After a cut to their earnings outlook caused a USDJPY Flash Crash, Apple looks to have righted the ship. Despite lower forecasts, traders were thrilled to see the strong performance and pushed the stock 5% higher in after-hours trading. Earnings per share read in at $2.46 on $58 billion in revenue – higher than the expected $2.37 EPS on $57.5 billion in revenue expected. 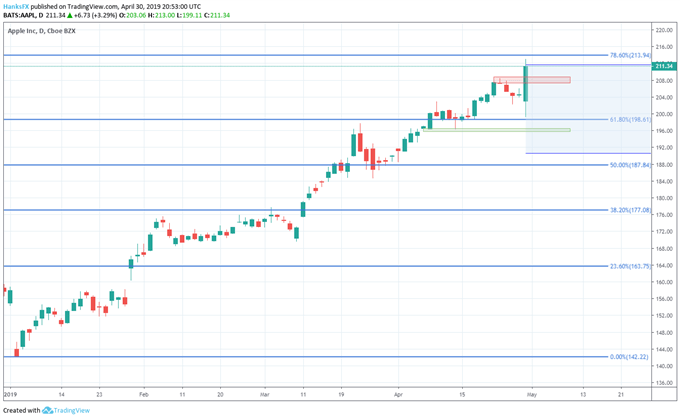 Outside of the two headline figures, an announcement to buyback $75 billion worth of shares likely buoyed price – but could be indicative of broader economic illness. Buybacks have been a point of contention in recent months, ranging from economists who are wary of current stock market valuations to politicians in Washington that question their economic fairness. Either way, one thing is clear. Flush with cash, Apple has shelled out considerable capital on share repurchases and is now responsible for 12 of the 20 record-quarter buybacks according to data from S&P Global. Apple’s actions play into the larger theme of growth concerns as companies are frequently unable to find efficient uses of capital and invest in themselves, effectively inflating stock valuations. While the ramifications of elevated share repurchases may eventually weigh on investor sentiment, Wednesday’s session will look to more immediate developments.

Contributing another strong performance to the season, AMD offered $0.06 EPS on $1.27 billion in revenue – compared to analyst expectations of $0.05 and $1.26 billion respectively. Although narrow, the beat was accompanied by a rally in AMD’s share price. Immediately following the release, AMD jumped 7% but remained within its implied price range – probing trendline resistance around $29.25. 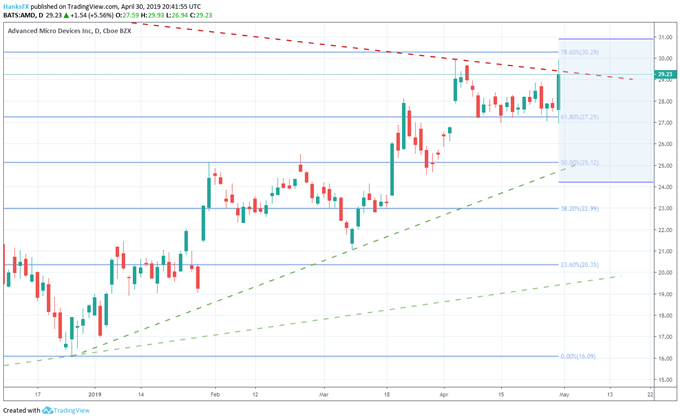 With the risk of an abysmal report from AAPL in the rearview, traders will now await Wednesday’s FOMC rate decision. Ahead of the event, check out a variety US Dollar trade set ups and view our Economic Calendar for all upcoming events in the week ahead.