Earnings season in the United States is in full swing this week which looks to be loaded with event risk. Although the corporate reports carry greater weight on a specific security basis, Japan’s Golden week could see the impact of earnings spread into other markets. January’s USDJPY flash crash following Apple’s earnings is one such event and the week ahead will see another report out of Apple after Tuesday’s close, but will history repeat itself?

Prior to Apple’s release, Google’s (GOOG) parent company Alphabet delivered their own results Monday. The corporate behemoth had lofty expectations to live up to and fell short across the board. Earnings per share missed at $9.50 versus $10.10 expected. Revenue also disappointed at $29.48 billion – beneath the $30.48 billion forecasted by Wall Street analysts.

Following the miss, shares of the search engine provider slipped 7%, more than double the earnings implied volatility and considerably outside the derived price range. On a similarly sour note, the company’s operating profit margin slipped to 18% from 21%. Given the company’s weighting in the Nasdaq, the tech-heavy index may lag the blue-chip Dow Jones in Tuesday trading.

Ahead of Tuesday’s open, General Electric (GE) and General Motors (GM) will report their financial standing. The two household names have both seen better days, each trading comfortably beneath their all-time highs in 2000 and 2017 respectively.

Of the two, GE is expected to experience the larger price swing with 1-day implied volatility of 7.57%. To the topside, GE stock will have to drive through resistance from late October and the minor 50% Fib level around $9.85. Should quarterly results fail to meet analyst expectations, selling pressure will first have to surmount the confluence of the 38.2% Fib level and a rising trendline around $9.10. Subsequent support is less clear, and the 20-day implied low - if reached - would see the stock trade at its lowest price since early 2009. 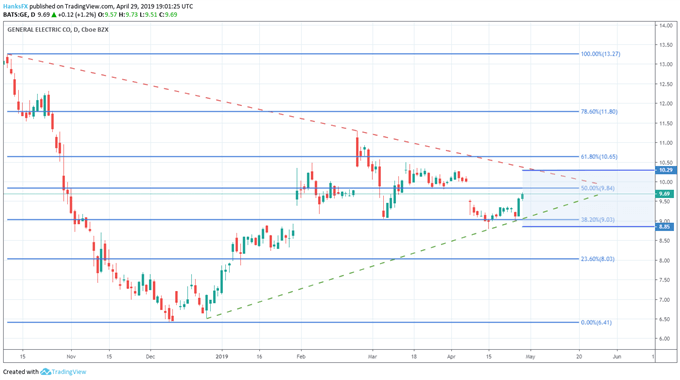 GM is expected to exhibit volatility of its own, but to a lesser degree, with a 1-day implied volatility of 4.19%. GM shares closed slightly beneath $40.12, the 23.6% Fibonacci retracement from the stock’s all-time low in 2012 to its all-time high in 2017. The level has influenced price in the past and should look to do so again after earnings but is unlikely to singlehandedly stem a move higher on impressive earnings.

Also inside the implied post-earnings price range, GM’s share price will have to negotiate conflicting trendlines. To the topside, resistance may be offered from the highs in October and February while shares will look for support from the trendline originating at December’s lows. 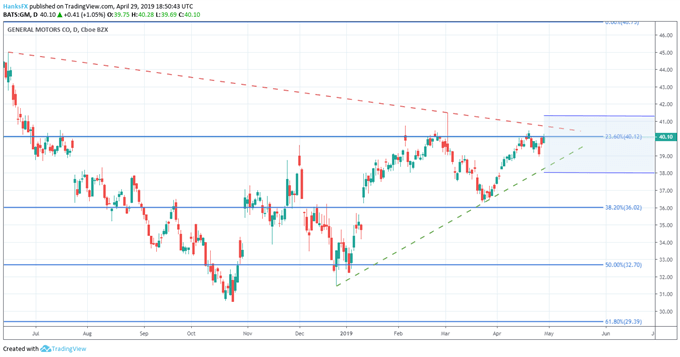 For the broader S&P 500, the put-to-call ratio climbed to a two-week high on Friday at 0.63 – equal to the 1-year average. Outside of corporate earnings, the index will have to grapple with Eurozone, Mexican and Canadian GDP figures on Tuesday. Option positioning may continue to swing as traders look to hedge serious event risk in Wednesday’s FOMC decision. View our Economic Calendar for all upcoming events in the week ahead. In the meantime, follow @PeterHanksFX on Twitter for equity insight. 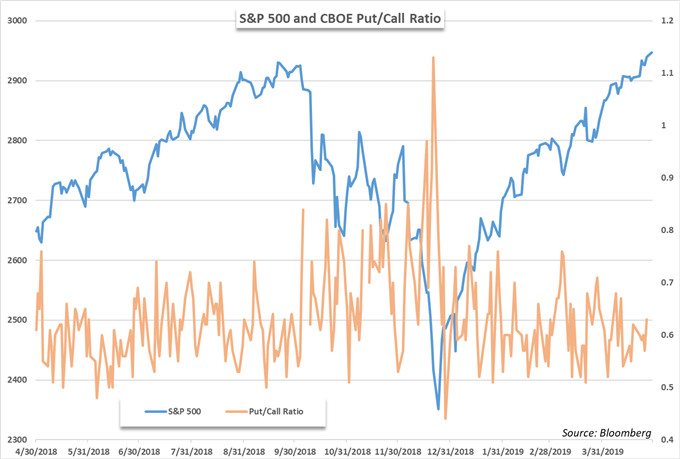