What is the Fed’s Number One Fear?

In its inaugural Financial Stability Report (FSR), the Federal Reserve warned of ‘elevated’ corporate debt levels in the US economy. While the report detailed several risks that could adversely impact financial stability, corporate indebtedness appears as the headline concern. The concern was also echoed by ex-Fed Chairwoman Janet Yellen who backtracked on her belief that the occurrence of another financial crisis would not happen “in our lifetimes” which she stated in an interview June of last year.

Several metrics depict that the recent runup in leverage could pose a major threat while others contend that current levels of corporate debt are justified with correspondingly high profits. While analysts and economists alike find themselves at odds debating the topic and its implications on the financial landscape, investors are left to strike balance between risk tolerance and downside protection. Ultimately, this begs the question: how big of a risk does corporate debt pose to financial stability?

Leverage on the Rise 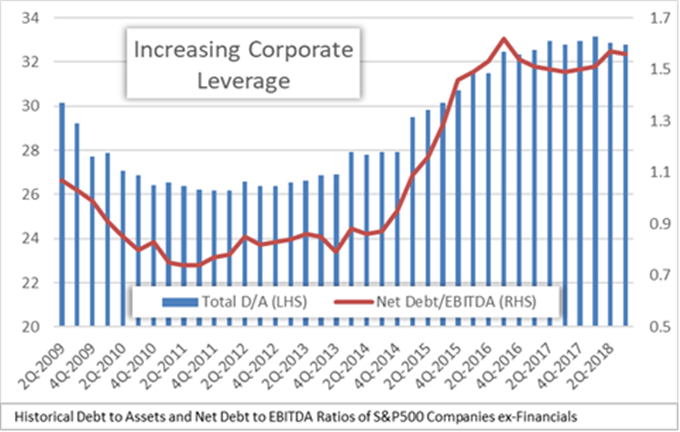 One of the most commonly referenced metrics for evaluating leverage is the debt to assets ratio which shows how much debt a company has for every $1 in assets. With the most recent debt to asset ratio of 33x surpassing that of 30x notched during the last recession, it is no surprise that the Federal Reserve would mark corporate debt as a risk to financial stability. Another measure frequently used for analyzing leverage is the ratio of net debt to earnings before interest, taxes, depreciation and amortization (EBITDA). This gauge presents a more alarming message with the ratio of net debt to EBITDA nearly doubling from a post-crisis low of 0.8x to a staggering 1.5x at the end of 2Q2018. 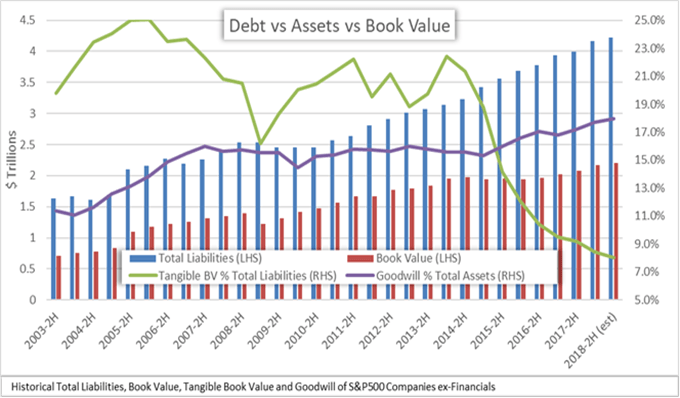 Evaluating capital structure is another way to look at corporate leverage since it breaks down the composition of assets, debt and equity. Taking the difference between total assets and liabilities yields a company’s net book value which is widely used in assessing capital structure. Conceptually, net book value is the residual owner’s equity that remains of a company’s assets after satisfying all its obligations. With the absolute level of debt already sounding the risk alarm, plummeting tangible book value as a percent of total liabilities is even more troubling.

The growing debt load has largely been used for acquisitions and stock buybacks opposed to investments in research and development or new long-term assets. Although buying back outstanding stock creates a wealth effect for shareholders, the capital is not being invested in productive assets that produce recurring cash flows for the business. On the other hand, buying out a company generally commands a premium in excess of the target company’s fair value resulting in the creation of goodwill on the acquirer’s balance sheet as an intangible asset. Although the merging of two companies can unlock synergies spurring revenue growth or cost savings, expected synergies often fail to materialize or fall short of expectations resulting in the erosion of value. This point is illustrated by the relationship between tangible book value and total liabilities nosediving over the last 5 years from nearly 23 percent to below 8 percent. 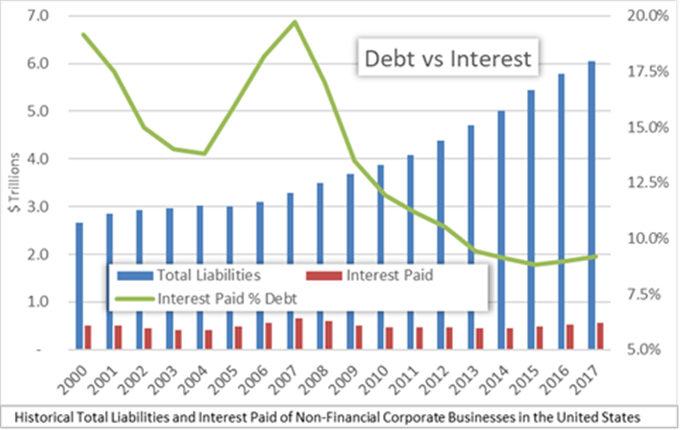 Since the financial crisis, aggregate nonfinancial corporate debt in the United States has skyrocketed from $3.7 Trillion to almost $6 Trillion. The expanding debt load has been facilitated by global central banks pushing interest rates down to artificially low levels hoping to encourage borrowing that would stimulate growth. Despite the positive benefits leverage can offer, it can end up causing more damage if not utilized appropriately. This is especially the case once the bill comes due for companies that “bite off more than they can chew” in terms of borrowing more debt than they can handle. As baseline interest rates in the economy begin to rise, so will the amount of interest paid as a proportion of total debt outstanding. The parabolic climb in funding costs will ultimately result in an increasingly onerous cash outflow. 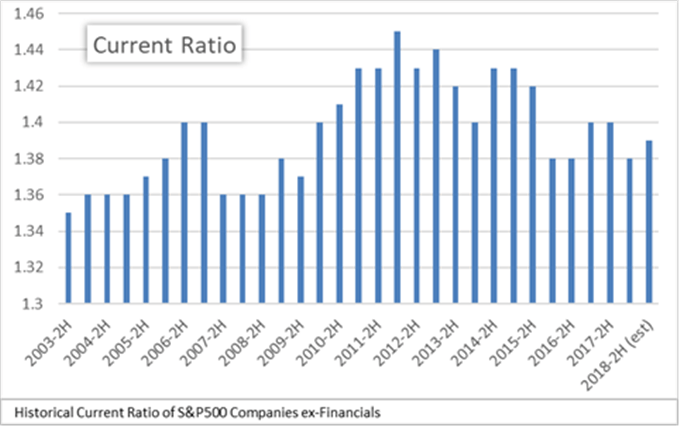 The issue of debt and leverage effectively boils down to a debtor’s ability to satisfy the obligations owed to its creditors. In other words, debt is not a problem until a borrower can no longer service interest and or principal payments when they come due. A worsening current ratio, calculated as current assets over current liabilities, shows that companies have less liquid capital on hand to satisfy their obligations due over the next 12 months. This problem of increasingly cash-strapped companies will only be exacerbated by rising interest rates due to its direct effect on cash outflows as previously mentioned.

Clearly, the Fed’s concern over corporate debt is justified seeing measures indicating leverage is at extraordinarily high levels. In light of this, there are other corporate debt metrics that suggest current levels of debt are more acceptable given the amount of cash flow and cash on-hand for US corporations.

Corporate Profits Have Climbed with Debt 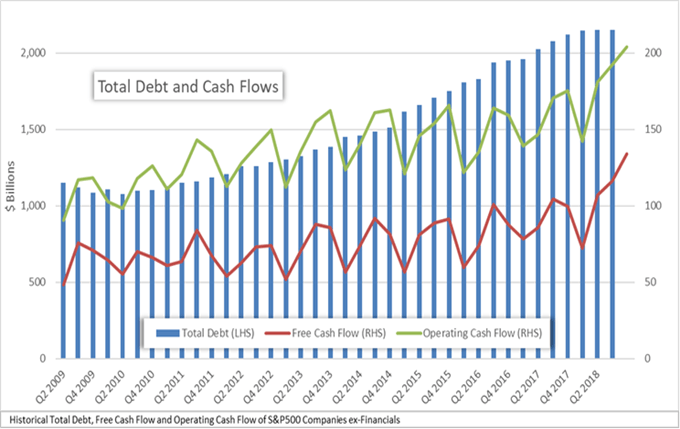 While debt is undoubtedly elevated, so too are corporate earnings. Cash flows have been bolstered by corporate tax cuts passed by President Trump while firms continue to increase profit margins. In the timeframe above, total debt roughly doubled. Across the same span, operating free cash flow has followed suit. The increased cash flow should in theory allow firms to pay off debt more easily given that corporations deem debt repayment an appropriate use of funds. Given the robust strength of the US economy over recent years, cash flow growth has allowed firms to build cash and cash equivalent holdings on their balance sheets.

Cash Holdings Have Grown but are Outpaced by Debt 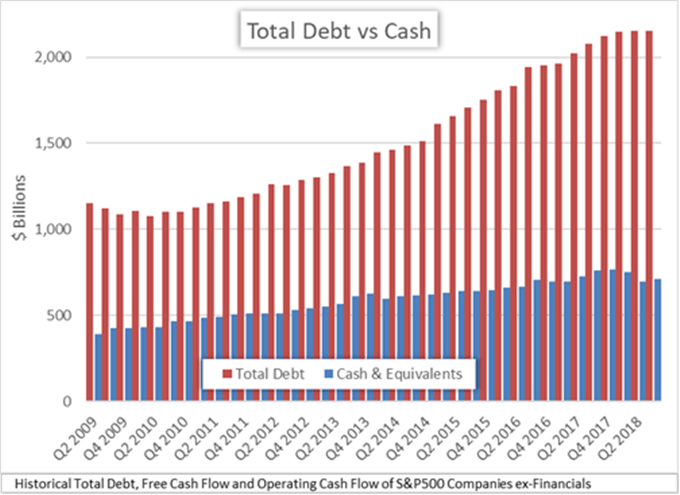 As shown above, cash has grown along with debt in the last decade but remains outpaced. On a percentage basis, average quarterly cash holdings of US corporations grew by 75 percent from 2009 to 2018 while debt has grown by 95.5 percent over the same period. Further, the ratio of debt to cash has increased from 2.875 to 3.07. Although cash has been outpaced by debt holdings, the cash holdings remain relatively in range from a historical perspective.

The cushion provided by strong cash-flow and cash holdings is a topic of debate in the corporate debt picture and given the Fed’s nature, is largely justified. With their warnings on corporate debt levels and initiative to increase transparency, the Fed is wholly aware of the threat rate hikes pose to indebted corporations and the broader economy. For this reason, many believe it is unlikely the Fed will veer from its 25-basis point path and hike unexpectedly.

Similarly, corporate analysts and financiers are cognizant of the Fed’s tricky position and will look to extract the most profit possible for their shareholders while cash remains cheap. It is in this balance that US investors find themselves. As the Fed looks to continue its path to normalization, it is largely up to corporate leaders to wind down credit usage responsibly. Years of record low interest rates have generally spoiled many corporations, but it is naïve to expect all corporate leaders to gradually decrease their leverage despite the risk of a bubble or crash as debt becomes too arduous to repay.

“Debt owed by businesses relative to gross domestic product (GDP) is historically high, and there are signs of deteriorating credit standards…The associated debt and leverage, in turn, make the risk of outsized declines in asset prices more likely and more damaging”

While some aspects of the corporate picture suggest an ability to service the ballooning debt load, this may not be the case should adverse shocks to the financial system materialize. Concern is undoubtedly warranted as the evidence of excessive leverage shows. Consequently, the looming threat that corporate debt poses to financial stability and the economy should be closely monitored on every investor’s radar.