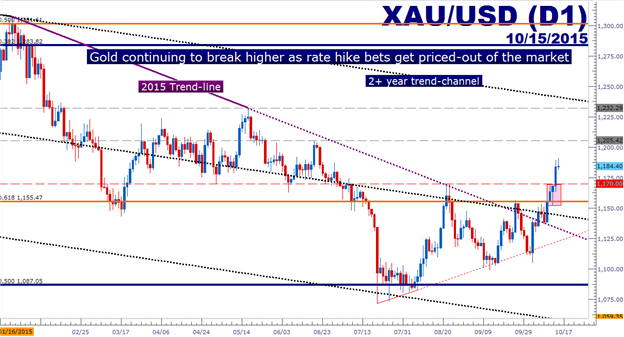 1. So, about that 2015 rate hike: Despite the continued banter around a 2015 rate hike out of the United States, the deeper we get into the year the less likely it looks that we’ll actually see anything. The reaction in the US Dollar since the release of the September FOMC minutes is telling as to how strongly this theme is currently showing in markets.

After the hawkish-hold at the September meeting, in which the Fed kept rates flat but Ms. Yellen provided multiple assurances that the bank still felt that a 2015 hike would be appropriate, risk aversion remained in many markets as the combined forces of an Asian-slowdown, a dramatic drop in commodity prices, and new-found weakness in Germany were too much to bear with the thought of tighter monetary policy out of the United States. But once we saw the minutes from that September meeting, which included multiple mentions of ‘China’ and concerns about global weakness – we found out that the decision to hold rates flat wasn’t all that close after all. The Fed is still showing caution, and it doesn’t seem very likely that they would hike with the flurry of risk variables swirling around in the world right now. This has begun to usher in that old mentality of ‘bad news is good’ for risk assets, as bad news would likely equate to looser monetary policy for longer.

But perhaps more relevant to this theme of ‘looser for longer’ is the US Dollar; as rate hike bets throughout the year have driven the greenback higher – and as those bets come-off, there is continued room for trends to run, particularly in hard-hit assets like Gold. As we looked at yesterday, Gold broke to a new multi-month high after Chinese inflation disappointed, and as rate hike bets for the United States continue to get kicked further and further into the future, this trend could become even more attractive as an anti-dollar play.

As we see more worrying data, and as FOMC members continue to speak on the theme of a 2016 rate hike or ‘caution’ around a 2015 rate hike – look for this theme of USD weakness to continue. Gold will likely be one of the most attractive beneficiaries of this theme.

2. Gold isn’t the only market showing ‘Anti-Dollar’ tendencies: Another interesting development over the past 24 hours has been the move that we’ve seen in USD/JPY. After the outsized-move in the pair on China’s ‘Black Monday,’ traders got a look at what would likely be one of the more attractive ‘safe-haven’ plays should risk-aversion continue to develop. The prevailing thought being that with a weak US Dollar being driven lower by weaker rate expectations, more pressure would move towards Japan as they continue to battle deflation despite being in the middle of a full-fledged QE program. While the chorus of ‘more QE’ has been growing amongst economists watching the Japanese economy, the Bank of Japan has yet to offer anything that would allude to any future announcements.

This can make the Yen vulnerable as we’re still approximately 50% higher in USD/JPY from three years ago, much of which has been driven by QE and QE-expectations. After the economic world took a step back from the ledge on August 24th, congestion has shown in many markets, USD/JPY included. When the shock-NFP print came in earlier in October, the initial move of risk-aversion saw USD/JPY sell off and set a low at 118.68 as yen-strength was driven by safe-haven bets. 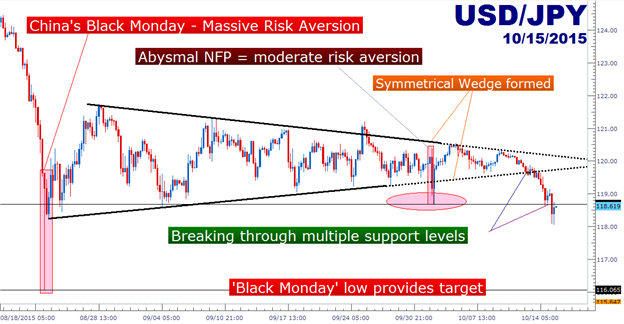