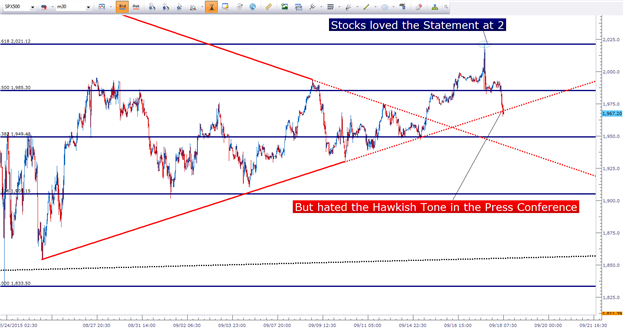 Are Global Markets Losing Confidence in the Fed?

1. The Fed Holds and Many Global Markets Sell-Off:The Fed went with a ‘hawkish hold’ at yesterday’s meeting, meaning they held rates flat but did suggest that hikes were coming before the end-of-the-year. So in reality, nothing is really very different from this time yesterday: Rates in the US are the same, the Fed still wants to hike before the end of the year, and the only really new information that we have is a slightly more dovish dot-plot matrix that shows the Fed’s expectation for even lower rates and fewer rate hikes in coming years. During the press conference, Yellen took on a slightly hawkish tone, but also indicated that the Fed is monitoring the situation in international markets; but she also said the decision to hike was based on US data alone, which of late has been ‘good-ish,’ which means the bank is still on pace to hike despite the numerous pressure points being seen in the global economy.

Both the US Dollar and US Stocks have sold off with aggression since the announcement, and this is somewhat counter-intuitive of what one might expect. With this additional Fed support (by not hiking rates), yet with a hat tip to strength in the US economy and the prospect of hikes at the October or December meeting – The Fed took a balanced overall tone. But the fact that many global stock markets have sold off in the last 16 hours along with the US Dollar, while the Yen is gaining strength across-the-board make this look like the ‘risk off’ moves of last month; when global stocks began to sell-off on the back of Asian economic weakness. My colleague, Christopher Vecchio, has already outlined why yesterday’s announcement was a negative for risk assets despite the fact that the Fed held rates flat.

Of particular note is the move that the S&P put in yesterday. Shortly after the statement came out at 2pm, stocks rallied as the lack of a hike combined with the more dovish dot plot matrix gave the appearance of a more accommodating Fed. The S&P 500 ripped up to a key level of resistance – the 61.8% Fibonacci level (of the move comprising the May top to the ‘panic lows’ of 8/24) at 2,121. But after Yellen took the stage and as she spoke further during the press conference, the S&P sold-off heavily. Since then, we’ve traded off by over 50 handles on the index, and we’re currently catching support on a projected trend-line connecting the recent price action lows (shown in red on the below chart).

There are a few possible reasons as to why we may be seeing such an aggressive risk-off move after what was, in the end, a ‘no change’ meeting from the Fed. The more troubling of these scenarios is that the Fed may, in fact, be losing confidence from market participants. After multiple fits and starts of this whole rate hike topic, with the Fed backing up each time in response to economic weakness, investors may be to the point of just not wanting to deal with it anymore.

Sitting in cash has never looked so attractive: Asia is hitting the skids and the prior engine of growth throughout the continent (China) is facing especially complex issues; Europe is dealing with Greece and the possibility of another such scenario should a banking union not come about, and the slaughter in commodity prices is still filtering into the US economy.

Investors hate risk, and rightly so – as it threatens returns (the entire prospect of investing in the first place). And with ZIRP driving yields so incredibly low, investors had to choose from a few really bad options: Take on a higher proportion of stocks in the portfolio (a more aggressive asset allocation), or buy low-yielding bonds that will get absolutely crushed as rate hikes come in (yields and prices move inversely, and if market rates are at 4% you’ll need to take a discount on that bond with a 2% coupon if you want anyone to buy it from you).

And with stocks staging a six-year up-trend, the first of those options was likely the most attractive to many investors, and this became a self-fulfilling prophecy as higher prices just brought more and more people into the market and made that option of taking on a more aggressive asset allocation even more attractive v/s buying low yielding bonds that you know will get hit as rates go up. This is how bubbles are formed: A lack of available options and blind trust that prices will just keep going up forever.

As the Fed has taken this hawkish stance towards rate hikes – this tells investors that the more aggressive asset allocation option might not be such a smart idea; because the Fed is no longer supporting the market in the same way that they had during the life of this six-year QE-fueled up-trend.

The Fed has said that they want to begin hiking rates to offset ‘excessive risk taking.’ Well, that’s exactly what ZIRP and QE have done, because of a lack of available options and the hope that stock prices would just keep on rising until the economy could support those more robust valuations. The Fed has also said that they’re looking at as many as four hikes next year. This makes the thought of holding fixed income investments, and the prospect of staying long stocks – even more daunting. And just yesterday in the dot plot matrix, we even saw one Fed member expect negative rates next year.

This all amounts to significant confusion, far less clarity and quite frankly – a risky environment to be holding an aggressive asset allocation in an investor’s portfolio. This has brought more risk into the environment because the Fed’s stance towards next year and thereafter is now in question. This additional risk has encouraged investors to tighten up their portfolios ahead of impending rate hikes, and this has sparked the initial stages of risk aversion: The bigger question is how much risk aversion might we see in the coming weeks as these themes follow-thru.

2. One Bank that has Provided Better Clarity of recent is the Bank of England, and as we outlined yesterday – long sterling may be one of the most attractive ways to speculate in the current environment. GBP/USD is up approximately 100 pips since the start of yesterday’s FOMC announcement at 2 PM.

The UK is one of the few economies other than the United States that is seeing those initial signs of growth with the prospect of future inflationary pressure. Last week, BOE member Kristin Forbes warned that rate hikes may be coming ‘sooner rather than later.’ Earlier this week, UK wage growth printed at new intermediate-term high of 2.9%, and shortly after that Mr. Carney gave warning that rates may be hiked in early 2016 to counter inflationary pressure.

Since then, we’ve seen the Sterling rise as investors begin pricing in a higher probability of a quicker rate hike out of the UK. 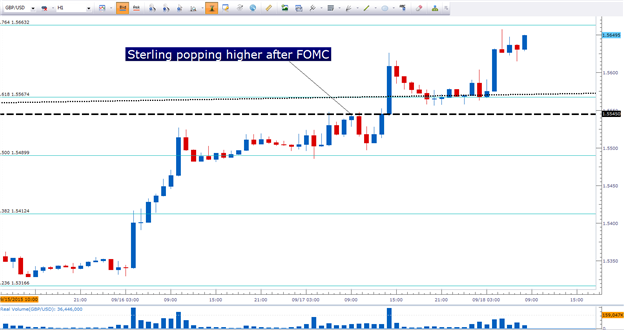 3. Should risk-aversion continue to pick up – look to the long yen trade as an attractive way to play ‘risk-off.’ We discussed this theme earlier in the week in the article, The Yen as the Safe-Haven Vehicle of Choice, and should panic continue to seep into the market, traders can look to the long side of the Yen to play that theme.

USD/JPY has put in a fairly strong correlation with US stocks of recent; and rather than the correlation it’s the alignment of these themes that is so attractive. If risk aversion is going to continue, this puts more pressure on the Bank of Japan to do another more QE; which up until now, they haven’t seemed too keen on doing.

After three years of QE has driven the USDJPY higher by more than 50%, many traders are sitting in short-yen carry trades that can unwind extremely quickly should risk aversion continue. One look at USD/JPY on 8/24 highlights this theme… as risk-aversion increases, carry trades unwind and new trends are formed (which can create the opposite of the self-fulfilling logic mentioned earlier in the article, by bringing new sellers into the market to chase the down-trend). 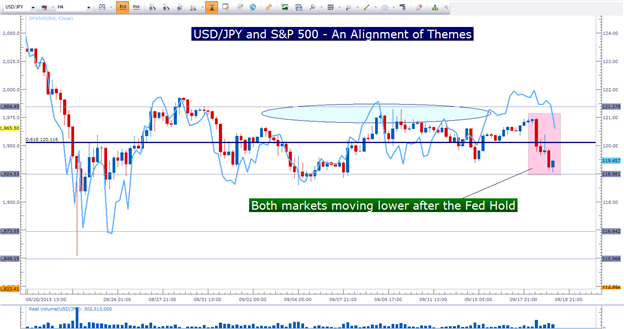