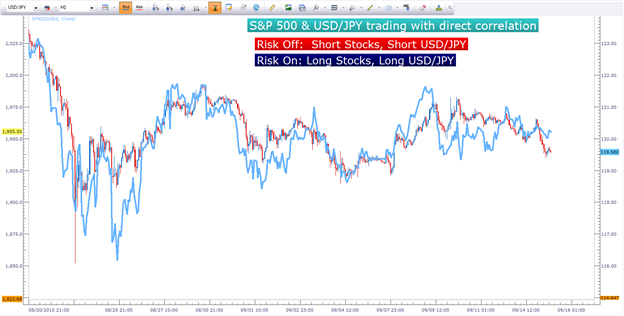 The Yen as the Safe-Haven Vehicle of Choice

1. The Bank of Japan issued a monetary policy statement in the overnight session, in which they voted 8-to-1 to keep policy unchanged with the Asset Purchase Program continuing at an annual rate of 80 Trillion Yen. The one dissenting vote was to slow the program to a 45 Trillion Yen per year clip, but no statements were made towards expanding the program in the future.

This further highlights the potential of long-yen trades in safe-haven market environments. With weakness permeating throughout the Asian economy, Japan stands as one of the more-established and diversified economies in the continent and will likely see safe-haven demand should the ‘risk off’ trade continue to build. With the Bank of Japan moving even further away from potential intervention, this highlights the potential for strength in the Yen, as one of the primary drivers of Yen weakness was intervention (or the hope of more intervention), and it doesn’t look like that’s going to happen anytime soon.

USD/JPY has built a fairly strong correlation with the S&P 500 in the recent past, and this performance can be expected to continue as these themes align rather nicely… Should the US ‘recovery’ continue to set hold, then stronger stock prices would be anticipated along with the dichotomy in monetary policies between the United States and Japan. In this recovery theme, higher expected US rates would drive dollar flows, while continued weakness in the Japanese economy would denote a weaker Yen. On the other hand, should panic continue to set-in to the global economy, stocks would likely weaken on additional risk aversion while the dollar weakens on diminished rate expectations, and the yen strengthens on safe-haven demand.

2. Chinese Stocks Drop Again: Chinese stocks have been under pressure for three months now after the Shanghai Composite topped out on June 15th. Since then, the index has dropped by over 40% as it’s snuffed out all of its 2015 gain. But to put matters in scope - we’re still holding on to a 30% return on the Shanghai Composite year-over-year, and the Shenzhen Composite is up 21% over the same period of time.

The Shanghai Composite was off by -3.52% and Shenzhen sank by -4.97% in an overnight session that saw persistent selling throughout. The Shanghai Composite saw a quick bounce towards the end of the session off of the 3,000 psychological support level. As we had looked at just last month, Chinese stocks have had a tendency to put in late-session ramps to see stocks surge by 1% or more in the closing hours of trade. Those late-session ramps have been noticeably lighter over the past two days, as selling has continued deeper into the session and the surge towards the close has been considerably lighter.

The Hang Seng (HKG33) has put in similar movement, and the daily and weekly charts are looking as though they may be accommodating for short positions. The six-year-trend-line (shown in blue) had held support on the Hang Seng since the Financial Collapse… but as persistent selling in Asian equities permeated the global economy in Asia, the trend-line gave way to sinking prices. From the weekly chart, we may have seen a lower-high print with the high of last week (approx. 22,210 on the Hang Seng (HKG33)). 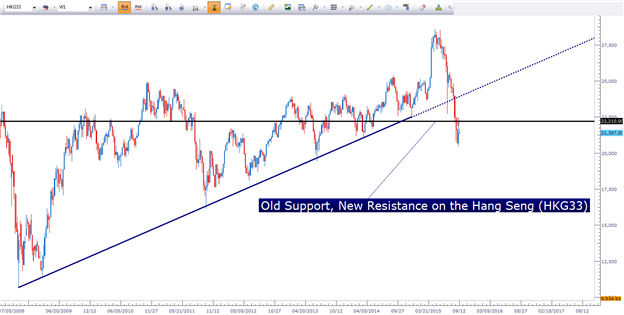 3. US Data Ahead of the Fed: This week is heavy on US news with the Federal Reserve Meeting looming ominously on the economic calendar. And while FOMC will likely set the tone for risk trends, we do get some US data to work with ahead of the rate decision/press conference on Thursday at 2:00 PM EDT.

This morning, retail sales came in under expectations by printing .2% v/s an expectation of .3%. And tomorrow morning we get US CPI, which is expected to come in at 1.9% for core CPI, and .2% for headline. As this is the last piece of data that comes in before the Fed meeting begins, expect traders to price these data prints in line with movements in rate expectations. Futures markets are pricing in a ~30% probability of a quarter-point-hike on Thursday, and this could propel the US Dollar in either direction. The Greenback is finally finding support after coming off of near-term highs, and support in the 11,950-11,970 zone could provide the motivation for long positions. 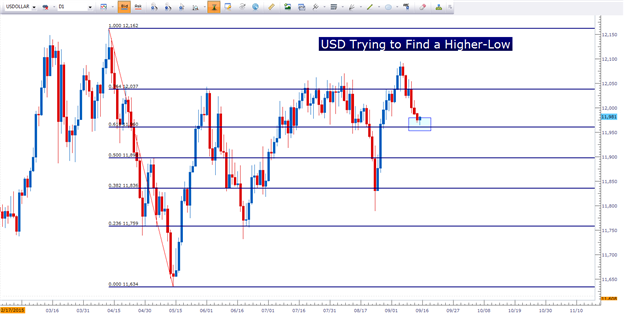