Long Sterling as the Most Attractive Way to Trade FOMC

1. The Meeting we’ve All Been Waiting for is Finally Here: Today should be interesting. At 2 PM EDT we get the Fed Rate Decision, and at 2:30 we begin the press conference with Ms. Janet Yellen. This gap between the rate announcement and press conference could be treacherous for traders whether the Fed hikes rates or not. Expect volatility around 2:00 PM to be followed by low-liquidity conditions while traders wait for Ms. Yellen to begin speaking with the press. And at 2:30 PM, expect a constant onslaught of volatility throughout the press conference. The context with which the Fed delivers this decision could be as important as the decision itself.

Ms. Yellen hasn’t spoken in public for nearly two months. Economists and Analysts seem to be rather split as to whether the Fed will move through most opinion polls, while traders are less sure if we’re gauging Fed Funds Interest Rate Futures. In reality, nobody really knows what is going to happen. This is the type of data that can start new trends or provide highs and/or lows that can be used for stop placement for weeks ahead. There’s also a chance that today is a snoozer: In markets, you have to expect the unexpected.

What is probably fairly certain is the fact that the Fed doesn’t want to be the cause of a crash. And after the global economy caught its breath after the panic towards the end of August, the bank has had plenty of time to discuss how they’ll deliver this news, whatever it might be. So even if they hike, expect a large amount of dovishness to come along with it. This is where we’d expect to hear things like ‘gradual rise,’ or ‘data dependency,’ or things of that nature, indicating that another hike isn’t necessarily imminent just because we got one today. Alternatively, if they hold rates flat – expect this to come with a hawkish statement that will likely allude to a pending hike in October or December of this year. This is the scenario that Morgan Stanley began talking about earlier in the week that’s been dubbed a ‘hawkish hold,’ and this seems like a fairly likely outcome given expectations leading into the announcement.

As for which markets may be most opportunistic: Again the context will likely be the differentiator here rather than the binary decision of ‘did they hike/did they hold.’ If this meeting fires on risk-aversion, similar to what we saw at the end of August as Chinese slowdown concerns, falling oil prices and an impending rate hike created a flight-to-quality, then long Yen will likely be an attractive area to be positioned around. We discussed this theme yesterday in the article, The Yen as the Safe-Haven Vehicle of Choice. As for which currencies would be most attractive to match up with long yen, short Aussie, Kiwi and Cad could all be attractive candidates; and perhaps even EUR/JPY to the short side as well.

However, if we get a ‘risk on’ type of drive after the announcement – expect stocks to pop higher, along with Yen weakness and a return of the EUR/USD down-trend. Long GBP/JPY could be especially attractive with this theme, as a recent pickup in hopes for rate hikes in the UK could drive sterling flows against a weak Yen.

The past two days have seen the S&P 500 climb higher, and this speaks to my earlier statement towards confidence in the Fed. The one consistent theme that we’ve seen from the bank since the Financial Collapse has been their unmoving support. Traders buying stocks ahead of today’s announcement could be the manifestation of the expectation for that theme to continue.

My expectation is that we’re going to see a hawkish hold, and risk assets are going to fly higher for the time being until additional global pressures become more prominent. 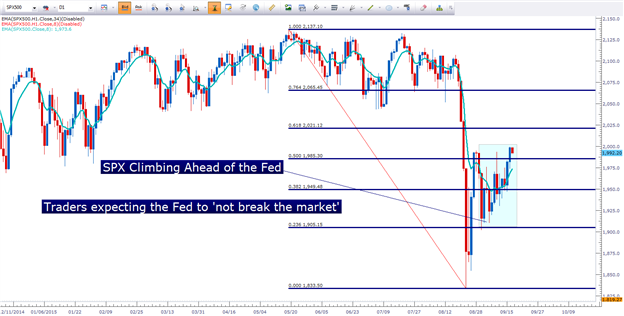 2. Long Sterling Just Got Interesting Again: One of the most attractive parts of the currency market is the fact that everything is traded in pairs. While this will often be a down-side for most newbies because it adds an additional component, after a trader realizes the luxury that this can provide – it’s often considered a pure benefit.

One of the reasons that pairs-trading can be great is the fact that dichotomies (differences) can develop between the economies represented in a currency quote that can allow for an elongated trend to develop. These are the types of trends that stocks or futures traders can often only dream of, because when a theme develops in the FX world, whether it’s a ‘flight-to-quality,’ or QE or a Central Bank embarking on some type of policy to try to juice their export balances – it can last for a really long time. And when this happens, such as a prolonged down-trend in the US Dollar or an extended up-trend in the USD/JPY – traders merely need to wait to ‘buy low’ or ‘sell high,’ to get on the ‘right’ side of the trend; and because these trends can potentially extend for even years (like USD/JPY has), traders can look to build positions while essentially trading in the direction of rate expectations. This is what leads to the carry trade, and this can be one of the most attractive long-term FX strategies.

Unfortunately, we haven’t had an attractive carry trade in the FX world since the Aussie topped out along with Gold in 2011. This is yet another consequence of ZIRP (Zero Interest Rate Policy). But as we get nearer to a rate hike, this theme could be around-the-corner, or at least beginning to develop into early next year.

We’ve even got one of our first candidates in the Sterling. The British Pound has seen similar price action over the last two years as the UK was one of the few economies other than the United States seeing signs of growth. As these signs of growth became more prominent, and as the expectations for inflation grew, traders began increasing expectations for an eventual rate hike from the Bank of England. This created an up-trend that moved GBP/USD from 1.4814 all the way up to 1.7190 (the 2014 high). But as the Sterling got stronger, their economy grew weaker. So weak, in fact, that those same rate hikes hopes that drove the currency higher diminished and traders priced those out of the market, creating a down-trend that lasted for nine months and saw GBP/USD move from that 1.7190 top to a new-low of 1.4564. 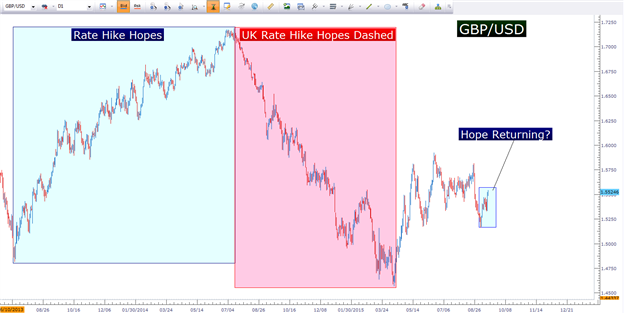 But of recent, those rate hike hopes are beginning to come back as the British economy is, once again, showing promise of growth. On Friday of last week, Ms. Kristin Forbes of the Bank of England warned that rate hikes may come ‘sooner rather than later.’ These are the types of comments that begin stoking rate-hike expectations. On Tuesday, British inflation printed at 0%, and the sterling moved lower, but yesterday UK Wage Growth printed at a +2.9% gain to re-fire those expectations. And later in the day, BOE Governor Mr. Mark Carney said that there was a chance that rates may need to be hiked in early 2016 if the economy continues to grow and inflationary pressures continue to increase.

This has fired strength in the British Pound against every currency, including the US Dollar, and this could be the initiation of the type of trend that could last for a while. In my technical piece on the cable yesterday, I noted how GBP/USD has established higher-low Fibonacci support as these increased rate-hike expectations have been getting priced into the Pound.

While the US Dollar may be congested for the next few months while we walk through these rate-discussions in the United States, long Sterling could be a way for traders to look to trade the ‘risk on’ theme that Central Bankers have been so supportive of. More to the point, traders can look to avoid the dollar by going long Sterling against currencies such as the Japanese Yen, the Euro, or perhaps even the Canadian Dollar. These economies are all currently seeing weak internal economies that likely won’t be able to bear a rate hike anytime soon; and each may actually be looking at loosening policy in the coming months. This is a way to trade on the expected divergence between two economies through a currency pair. 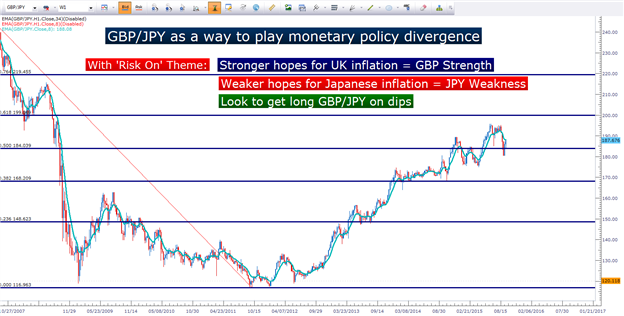