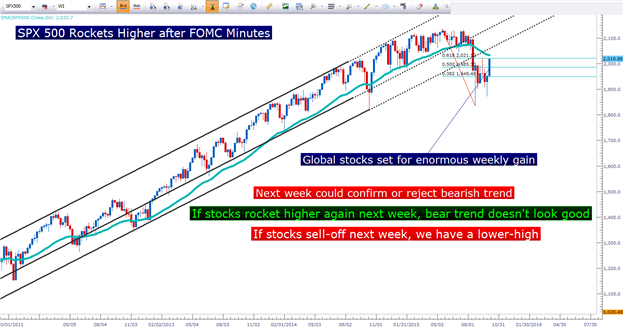 1.FOMC Minutes were released yesterday, and stocks ratcheted higher after it became clear that the Fed was concerned with global growth. There were numerous mentions of China in the minutes, along with numerous concerns around strength in the US Dollar – all leading to the prospect of ‘looser for longer,’ as it looks like the Fed is kicking that first interest rate hike deeper-and-deeper into the future.

To be sure – they did mention that they felt they were still on track for a 2015 rate hike, just as Ms. Yellen had claimed during the press conference. But within the minutes, it showed that the majority of the bank was in no hurry to hike rates, and that the numerous concerns that have enveloped the financial world over the past two months could, in fact, delay a Fed rate hike.

This is exactly what the market wanted to hear: The Minutes showed that the Fed felt that the US recovery was still on track, but global weakness was enough to hold back a hike; so that if these developments continue to evolve, such as a meltdown in Emerging Markets, another run of bearishness within China or plunging commodity prices – the Fed will still be supporting the market with ‘extraordinary accommodation.’

Since the release of these minutes – Stocks around the world have caught a major bid, and we’re looking at the biggest weekly rally in four years. Commodities have put in a huge gain over the week as well, Oil is set for its biggest rally since 2009, and even Glencore – the company that was conjuring up images of Lehman brothers only two weeks ago is up over 20% this week. Glencore has outsized exposure into mining and commodities, and they’re in so much debt that should the commodity slowdown continue, many banks will likely be left ‘holding the bag.’

But these aren’t concerns for now, as trends are heavily moving higher as investors catch their breath after the FOMC-fright of September. The good news is that normalcy has been restored, for now. The bad news is that we have another Fed meeting in less than three weeks, and we may find ourselves in this exact same quagmire then. The Fed has continually said that October is a ‘live meeting,’ meaning that even though there is no press conference scheduled, the bank could decide to hike rates at that meeting and call a press conference to explain the context of the hike.

But more likely – that won’t be happening. Expectations for an October hike have dropped dramatically over the past week after the abysmal NFP report of last Friday; and the next FOMC press conference in that case would be at the next meeting after October, set to take place on December 15th and 16th; a full two months away.

For now – risk is on in a big way as stocks around-the-world are rallying with breakneck pace. And while this looks completely-bullish, if you scroll out on the chart you can see that this story is far from over. Should stocks continue rallying next week, this could invalidate the recently triggered bearish-trend and the whole mentality of ‘buy the dip’ could reign supreme as the most attractive trading strategy for global stocks.

But should stocks sell-off next week, and at least partially-invalidating the price action of this week, we could have a lower-high that could make new short positions attractive.

2. The biggest take-away from FOMC Minutes is massive Dollar Weakness: This is probably the most enthralling theme to have developed since the release of the minutes, as this is not only something that can last a while, but one of the few risk trends out there right now that makes logical sense.

In stocks – good news is bad and bad news is good as the sole stimuli in markets and the biggest hope is for ‘looser for longer.’ And if the Fed minutes from yesterday told us anything, it’s that the Fed is reticent to hike if the environment isn’t right. And the environment right now certainly isn’t ‘right’ for a tightening of policy as much of the free world grapples with deflation, slow growth and a lackluster overall economic picture.

Dollar weakness, however, is something that can last for a while longer, as US Dollars have been heavily bid for the better part of the last 15 months as investors around-the-world have begun pricing in this first rate hike while much of the rest of the world dwindles in the economic doldrums. This more passive, less-hawkish Fed could further diminish those Dollar bets; and theoretically an inverse correlation could develop between risk assets like stocks and the US Dollar… so as we get ‘bad news’ that could amount to ‘looser for longer,’ we also get USD-weakness under the same prospect of looser monetary policy. 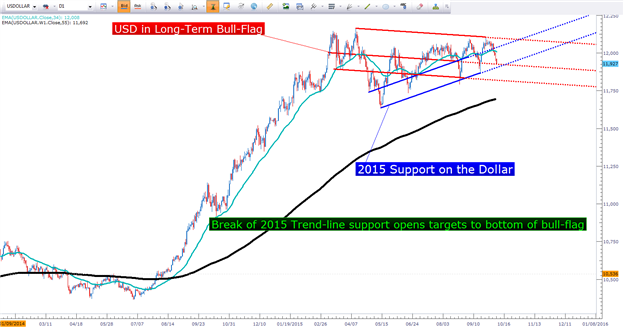 Nothing: Cash is a position too, and markets aren’t made for heroes. We’re at a critical juncture for the global economy, and while it may seem like it’s time to put on the rally hats again and look for new all-time highs in stock markets around-the-world, the fact that we’re essentially seeing larger reversals in the biggest movers from the previous move lower highlights that we might not be seeing a new bullish-trend as much as we’re seeing a retracement in the recently triggered bearish-trend. And while either development may bring on a massive moves and while markets are certainly appearing to be ready to snap in either direction; the higher probability is that we’re going to see some spikes of volatility before a direction is ultimately set.

After a heavy week, chasing trends on a Friday could be a dangerous endeavor. Instead, this could be a great time to work on the trading plan, or the strategy or setup a game plan for the next week.

If you’re looking to get started on any of these things, the 360° program can help, and it’s free.