1. So, NFP was bad: As in, real bad.This was the worst NFP report of 2015. Non-Farm Payrolls in the United States printed at 142K jobs added to American Non-Farm payrolls, and this was far below the expectation of 200k. But the bad news didn’t end there – wage growth disappointed, and this has been one of the driving forces behind the ambition of the Federal Reserve to raise rates. This disappointing wage growth makes the prospect of a 2015 rate hike even less likely; and despite the fact that Federal Reserve officials continue to talk up a rate-hike towards the end of this year, markets are becoming less and less convinced that they’ll actually do anything after five years of more of the same.

More than anything, this huge miss highlights how the global slowdown and accompanying market turmoil have landed in the United States; and one of the few bright spots in the global economy is now a little more-dim. This just continues to chip away at the confidence of the American ‘recovery’ that many have debated the efficacy of throughout 2015.

Today’s report also came with downward revisions to last month’s NFP, which originally printed at +173k jobs added was revised down to +136k. The unemployment rate stayed unchanged at 5.1%, but Labor Force Participation, one of the key factors diminishing the ‘health’ seen in the labor market during the recovery, has fallen to a 38-year-low at 62.4%.

The immediate reaction across markets has been brutal. Stocks sold off near-immediately, and risk aversion swept through commodity, bond, and FX markets around-the-world. This provided a super-charged move to USD/JPY and EUR/USD, as USD-weakness permeated through major FX-markets. I know what you’re thinking – if this is legitimate risk-aversion, shouldn’t the US Dollar be getting stronger on ‘safe-haven flows?’ Well, in a normal environment, absolutely. But what we’re in right now is anything but normal. The past six years have been ‘extraordinarily accommodative’ environments from Central Banks around-the-world. Zero Interest Rate Policy (ZIRP) combined with multiple stimulus efforts have distorted markets. This is why outlandish events like Spanish debt yielding less than that of the United States have happened this year. In a normal environment, credit quality will denominate how much interest you have to pay (much like how one’s credit score determines how low of a rate they can get on a credit card); but earlier this year we saw an economy that was teetering on the brinks of danger just two years ago trading with a tighter yield than the United States.

After stimulus and QE programs in Europe and Japan drove many investors and traders to use those low-yielding currencies to fund trading positions; continued uncertainty along with diminished hopes of a rate hike from the United States have created an ‘un-wind’ situation in these key markets. One might make the assertion that Euro is a ‘safe-haven’ by observing its strength in the midst of a risk-off move; but this would be a mistake. Only four months ago we were talking about dissolution scenarios for Europe and the prospect of it ‘all-of-the-sudden’ becoming a safe-haven

So, this environment is anything but normal. This is quantitative tightening, and the continued banter from the Federal Reserve about kicking rates higher while much of the world dwindles in the economic doldrums is likely the source of the current concern. As we discussed post-FOMC, it appears as though Global Markets are Losing Confidence in the Fed.

Stocks getting crushed after NFP

2. Want to play ‘risk-off,’ look to the Long Yen: this continues to be one of the more attractive themes across markets for playing risk-aversion or risk-off types of movements. And the reason behind this isn’t just the ‘unwind’ theory mentioned above, but should risk-aversion continue to increase in the global environment there are good odds that we’ll have a wider movement in the Yen than the Euro. One of the big reasons for this is the length of the QE-program leading to current day. Europe began their program last year, and Japan has been in this since 2012. USDJPY made a +50% movement after Shinzo Abe and ‘Abenomics’ drove Japanese markets, while EUR/USD is ~25-30% off of the highs from last year. So, comparably the Yen has more to lose here as ‘unwind’ sweeps through markets on this risk-aversion run.

But perhaps more interesting than that is what happened in 2008 during the last financial crisis; as USD/JPY moved from 123 in June of 2007 to 75 in October of 2011. So, during the last financial crisis while risk-aversion was sweeping the globe, the Yen took on safe-haven preference to the US Dollar; and this makes sense considering the prospect of Japanese investors ‘repatriating’ funds back into Japan after investing internationally to seek out higher-yielding products while facing an extremely low-yielding environment in Japan.

On top of this, China is facing intense pressure; and as Japan is a key trading partner of China and as it’s largely expected that China will devalue the Yuan in an effort to offset the headwinds of recession, Japan becomes vulnerable. As the Yuan depreciates, it will be more expensive for Japanese exporters to sell products in a very key market. It also makes imports from China cheaper, thereby dampening domestic demand for domestic products.

These forces together can make the Yen one of the more attractive safe-haven vehicles should risk-aversion increase, as carry trades unwind and as Japanese investors repatriate funds that were previously lodged into international investments, while China continues to face weakness along with the rest-of-the-world.

A big level is currently ‘in-play’ on USD/JPY at 119. In the below chart, we’re looking at Volume at price, and this is the number of traders that are already in the market with the approximate price, along with the side of the market that they’re on. As you can see, 119 is a huge level that has a massive amount of interest behind it. This is also the level we had mentioned as a ‘line-in-the-sand’ for risk-aversion in USD/JPY. If you would like to stay updated on Volume at Price as it’s published each week, you can join David Rodriguez distribution list to be notified when he publishes this each Tuesday: David’s distribution list for Volume at Price. 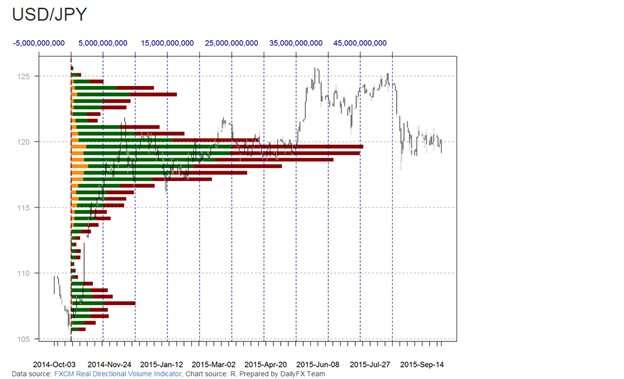 Volume at Price on USDJPY; prepared by James Stanley

3. Want to play ‘risk-on,’ look to Short EUR/USD: One of the more attractive areas should this panic dissipate, and should markets begin trending higher, again, would be the short EUR/USD position. The reason behind this attractiveness is the fact that the pair has traded higher as carry trades have unwound, giving the pair more room to fall; and also given the fundamental direction of each economy represented by the pair.

Just earlier this week, Europe posted a deflationary print; which indicates that more QE may be coming down the road after Mr. Mario Draghi assured markets that the bank could expand their program if need-be. Meanwhile the United States is looking at higher rates, whether it’s in Q1 or 2 of 2016 or later this year. Europe is expected to loosen policy while the United States tightens; offering a clear delineation between these two currencies should normalcy be restored.

Timing this type of stuff can be difficult, but as suggested in the article Is the Euro Down-Trend Ready for Resumption, we looked at using sentiment and positioning of retail traders to filter opportunity to the short side of the trade. This is what we call ‘SSI’ at DailyFX, or the ‘Speculative Sentiment Index.’ This is a real-time outlay of where real FX traders are positioned at on FXCM platforms, and once retail traders move to a ‘net-long’ position, the short-side could become increasingly attractive.