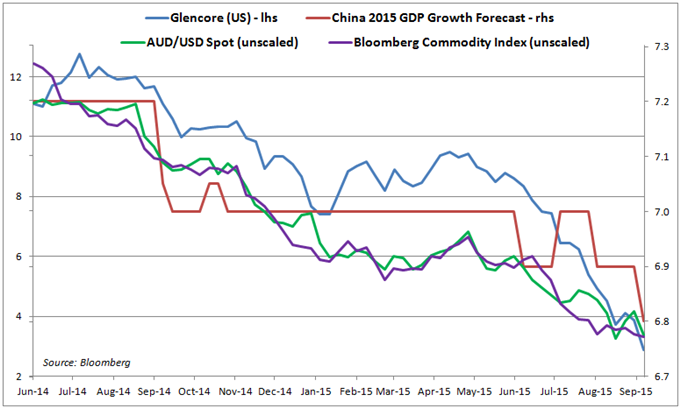 Shares of commodities giant Glencore Plc plunged 28.9 percent in US trade on Monday. The move marked a dual milestone for the company, delivering the lowest daily closing price as well as the largest single-session drop since its IPO in 2011.

Glencore has trended lower alongside the broad slide in commodity prices since mid-2014. In turn, that move has tracked the sharp decline in Chinese economic growth expectations. The East Asian giant is a key source of demand for raw materials and a slowdown there has translated into steep losses across the asset class.

This theme has also found parallels in foreign exchange markets, with the Australian Dollar mirroring the drop in commodity prices and Glencore shares alike. China is Australia’s largest trading partner and fears of a slowdown there fueled worries about knock-on effects on the latter country’s performance, feeding RBA interest rate cut speculation and undermining demand for the currency.

Investors were unconvinced by Glencore’s claims that its trading business will act as a stabilizing force on earnings in the event of a commodities price drop, making it better-positioned than competitors solely engaged on the industrial side. That seems to stem from the firm’s high debt load. A Wall Street Journal report suggested the company’s trading activity is funded by nearly $18 billion in short-term credit.

This conjures up images of another highly-leveraged firm whose ultimate failure plunged the financial markets into utter disarray in 2008: Lehman Brothers. The investment bank was undone when a downturn in the housing market doomed its debt-fueled foray into trading mortgage-backed securities. The drop in commodity prices may trigger an analogous scenario for a firm like Glencore.

The implications for global markets are likely to be no less dire in this case. Glencore is deeply entrenched in the international financial system and has credit lines with most of the world’s top banks. A disorderly collapse (or even plausible fears thereof) may inflict heavy losses on creditors, sending them scrambling for cash and unleashing another market-wide crisis. 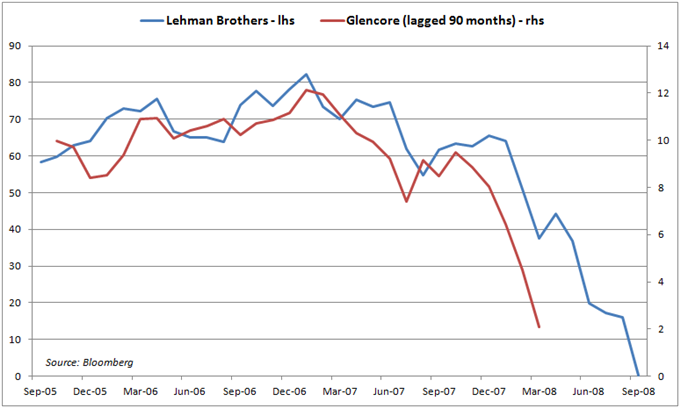