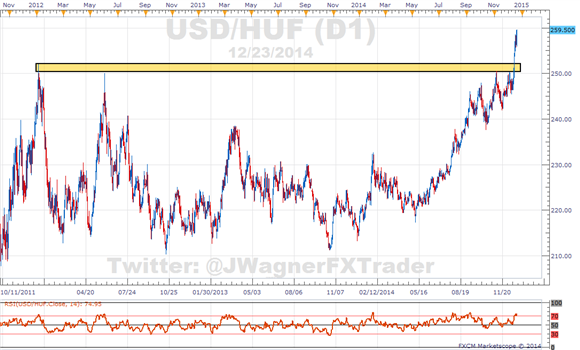 Minutes of the Monetary Council Meeting, for the Hungarian National Bank reveal that the eight member council unanimously voted to maintain the base rate at 2.10%. In accordance with the bank’s September projection, members concluded that the continuation of loose monetary policy for an extended period of time would achieve the mid-term inflation target. Topics under review included: stage of domestic recovery, external position of the economy, and investor sentiment.

In assessing the path to economic recovery, the council noted a degree of unused capacity present in the economy. Given this underutilization, inflation is expected to remain below the target next year before rising to 3.0% in the second half of the forecast period. As disinflation slowly diminishes the output gap is expected to narrow alongside a continued growth in domestic demand. Present inflation stands below the target at -0.7%.

Currently at 8.3% of GDP, the external position is expected to improve in the coming years as the CA surplus and external financing stabilize at a higher level. With a jump start, in the first ten months of 2014 the external trade surplus was equivalent to EUR 5.3 billion. Exports were valued at EUR 70.4 billion while imports measured EUR 65.1billion. Combined, the forint price level of external trade rose by 0.9% as did the terms of trade. Furthermore, the trade balance between extra-EU states improved; the trade deficit shrunk EUR 1.3 billion as exports grew by 0.9% and imports contracted 2.4%.

In conjunction with the CA surplus, external financing improved in the third quarter. Amounting to EUR 2.167 billion, foreign direct investments made by Hungarian residents and non-residents alike rose by EUR 586 million and EUR 1.086 billion respectively. Investor sentiment is expected to continue improving based on the following external circumstances: favorable US macro-economic data, lower commodity prices, and monetary easing within Europe, Japan and China. Additionally the renewed Funding for Growth Scheme is likely to further extend loans to small and mid-size businesses for investment purposes.

After considering 3 alternative scenarios factoring in downside risks, members elected to maintain the current base rate noting that an unchanged policy would likely improve the bank’s credibility and predictability.

The breakout above 250 on December 17, 2014 was important. This breakout opens the door towards 300 which represents the high made in the calendar year 2000.