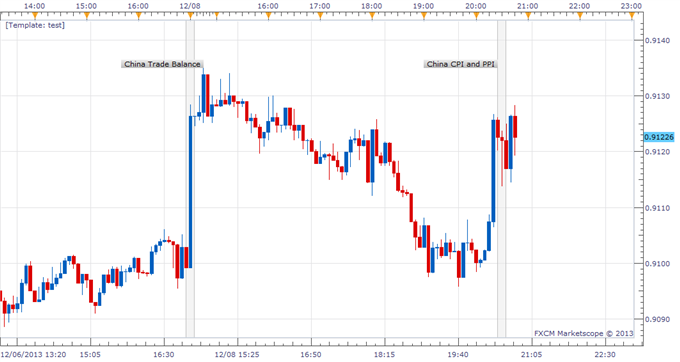 AUD/USD gapped higher to start the trading week in the wake of better-than expected Chinese trade data released over the weekend. Exports grew 12.7% year-on-year in November, topping forecasts calling for a 7.0% increase as well as the 5.6% result recorded in October. A pickup in Chinese overseas sales bodes well for the health of the economy as a whole and underpins expectations for the East Asian giant’s demand for raw materials, of which Australia is a key supplier. That in turn helps to lift the outlook for Australian economic growth and limit scope for RBA interest rate cuts, boosting AUD.

The Aussie subsequently edged lower amid what appeared to be a move driven by profit-taking following the initial opening upswing. Prices largely looked past a softer set of Chinese inflation figures. The headline year-on-year CPI rate edged down to 3.0% in November, falling short of the 3.1% expected outcome and the 3.2% rate seen in October. The result undermined the case for a near-term tightening of Chinese monetary policy – a broadly Aussie-supportive development – but a discernible stand-alone reaction didn’t seem to materialize as traders digested an already significant upward opening gap.

From here, Chinese Retail Sales and Australian Employment figures are in the spotlight through the rest of the week. Risk sentiment considerations remain significant as well amid continued speculation about the timing of the Fed’s move to “taper” QE asset purchases. With that in mind, US PPI and Retail Sales data as well as scheduled comments from Fed officials (including Bullard, Lacker and Fisher) may prove market-moving.

Chinese Data at a Glance:

New to Forex?Watch this video

-- Written by Cheng Li, DailyFX Research. Feedback can be sent to instructor@dailyfx.com

DailyFX provides forex news and technical analysis on the trends that influence the global currency markets.Learn forex trading with a free practice account and trading charts from FXCM.