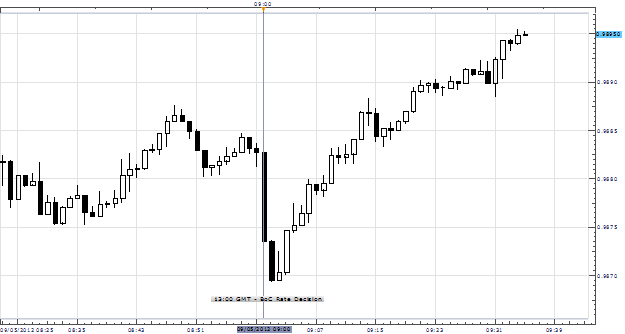 The Bank of Canada (BoC) announced its decision today to keep its benchmark interest rate unchanged at 1.00 percent, the 16th consecutive time that the Bank has decided to keep rates on hold. The Bank reiterated that it continues to see scope for a rate hike as domestic spending and business investment continue to drive economic growth.

In a statement released today, the Bank stated, “To the extent that the economic expansion continues and the current excess supply in the economy is gradually absorbed, some modest withdrawal of the present considerable monetary policy stimulus may become appropriate, consistent with achieving the 2 percent inflation target over the medium term. The timing and degree of any such withdrawal will be weighed carefully against domestic and global economic developments.”

The Bank acknowledged ongoing global headwinds, with the Chinese economydecelerating more than anticipated, U.S. expansion continuing gradually, and the euro debt crisis remaining “acute”. Softer foreign demand and the persistent strength of the Canadian dollar continue to restrain Canadian exports, which are projected to remain below their pre-recession peak until the beginning of 2014. Nonetheless, the BoC expects the underlying momentum of the Canadian economy to remain at a pace “roughly in line with the economy’s production potential”, with economic growth expected to pick up through 2013.

The Canadian dollar surged against the U.S. dollar immediately after the announcement by the Bank of Canada. However, USDCAD pair quickly reversed directions, with the loonie tumbling nearly 30 pips against the greenback. At the time of this report, the USDCAD was trading at C$0.9895.