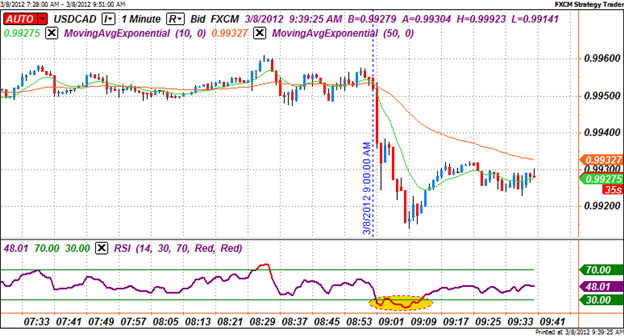 Loonie Surges as Bank of Canada Holds Rate at 1.00%

THE TAKEAWAY: Central Bank Holds Key Rate at 1 percent > The Outlook for Canadian Economy Has Improved and Inflation Expectations Has Been Well-Anchored> Canadian Dollar Gains

At the monetary policy meeting today, the Bank of Canada announced its decision to hold the key interest rate at 1.00 percent for the twelfth time in a row, extending its longest pause since the 1950s. The target rate has left unchanged since September 2010, after seeing three consecutive 25 basis points increases from 0.25 percent. Bank of Canada’s rate decision came in with no surprise as it matched with twenty-eight economists’ projections from Bloomberg survey. The Bank Rate is correspondingly 1.25 percent and the deposit rate is 0.75 percent.

The Bank cited “marginally improved outlook for Canadian economy” and “well-anchored inflation expectations” as the main reasons to keep the key rate on hold. Since the Bank released its January Monetary Policy Report (MPR), the global economic outlook has improved and uncertainty has reduced as European bank funding and sovereign debt markets showed signs of stabilization. Given enhanced global economic conditions, rising commodity prices and strong private demand, the Bank sees faster-than-expected growth in the first quarter. In January, the bank had predicted growth averaging 1.8 percent for the first half of this year. Besides, Canadian inflation is somewhat “firmer than previously anticipated” due to reduced economic slack and higher oil prices. Core inflation is expected to be around 2 percent over the forecast horizon.

The Bank also said in its statement that “persistent currency strength” of the Canadian dollar has been an ongoing challenge for the world’s tenth largest economy as this would dampen foreign demand and negatively affect net exports. “With the target interest rate near historic lows and financial system functioning well, there is considerable monetary policy stimulus in Canada”. Regardless, policy makers continued to endorse wait-and-see approach while noting that recent fundamental evidences point to better outlook than projected a couple of months ago.

In the minutes following the Bank of Canada rate decision, the Canadian currency immediately gained ground versus its major currencies. As can be seen from the 1-minute chart above, the USDCAD pair dropped approximately 50 pips from 0.9955 to 0.9915 within ten minutes. The Relative Strength Indicator crossing below the 30-level, an oversold territory, signaled that currency traders were aggressively selling the greenback in favor of the loonie. Obviously, improved prospect for Canadian economy indicates interest rates could hike again sooner rather than expected earlier that would attract more foreign investors looking for high-yield returns on their investments. At the time this report was written, the Canadian dollar was traded at $0.99275