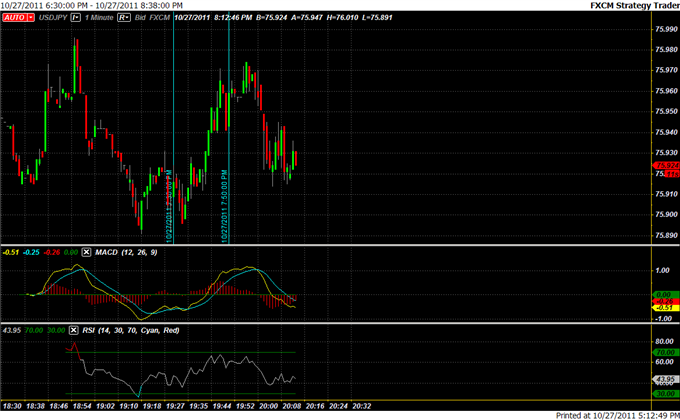 The Japanese Yen weakened briefly against the US Dollar before reversing course after data on unemployment, CPI, household spending, and industrial production painted a very mixed picture of the economic situation. The currency has been volatile within the 75.85 and 76.00 range since weakening from a historic high versus its US counterpart.

According to Thursday’s data, the jobless rate in Japan unexpectedly fell to 4.1 percent in September from 4.3 percent a month before; markets had been expecting a rise to 4.5 percent. In addition, overall household spending on a year-over-year basis declined 1.9 percent, versus expectations for a sharper decline of 3.5 percent.

At the same time, additional data suggested that Japan remains in a deflationary scenario, with national CPI unchanged YoY and core CPI falling 0.4 percent. Meanwhile, industrial production fell for the first time since the March earthquake, dropping 4 percent month-over-month in September versus a 0.6 percent expansion in August.

Thursday’s figures complement recent data pointing to a mixed recovery amid signs that the global economy will avoid a recession. Reflecting the more optimistic global scenario, trade data earlier this week showed that Japan’s trade balance returned to surplus in September. At the same time however, the most recent retail sales data showed a larger-than-expected drop, implying continued restraint on the part of consumers.

With the country struggling with deflation and the recovery in both consumer spending and manufacturing still far from entrenched, the Bank of Japan can be expected to continue its loose monetary for the foreseeable future. At the same time, both monetary and fiscal authorities will continue speaking out against the strong Yen and may adopt further measures. Earlier on Thursday, in a bid to counter the currency, the BoJ expanded its asset-purchase program by 5 trillion Yen and maintained its benchmark interest rate at 0.1 percent. However, the moves were largely in line with expectations and markets, betting that authorities will fail in their efforts to weaken the currency, drove USDJPY to its third consecutive historic low in three days of 75.66. Further volatility in the Yen can be expected in the coming weeks as markets weigh the effects of potential intervention as well as safety demand tied to Eurozone developments.