USD price action failed to find support at a critical technical level judging by the DXY US Dollar Index and could open up the door for further downside in the US Dollar. Thursday’s move was an extension from the prior day’s selloff in response to the October Fed Meeting which sent the US Dollar whipsawing lower. Though the US Dollar is still hanging onto confluent support by a mere thread and Friday’s high-impact data on Nonfarm Payrolls (NFP) and the ISM Manufacturing PMI for October could provide the fundamental catalyst that gives the greenback its much needed resolution. 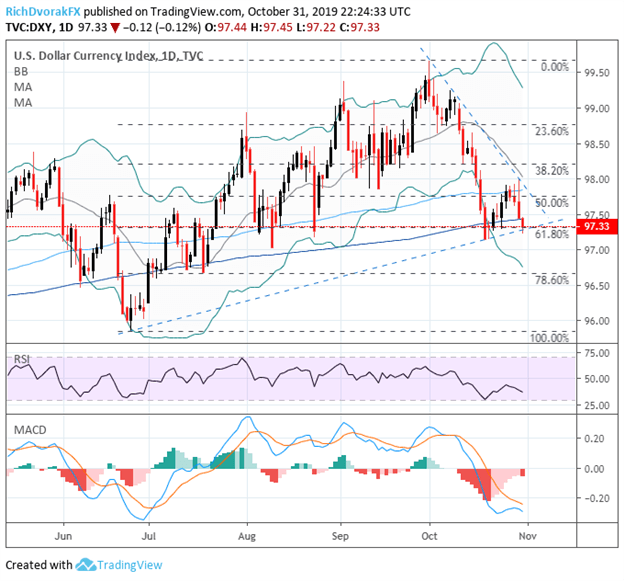 The US Dollar Index just sank below is 200-day simple moving average, but the world’s reserve currency is still gravitating around confluent support provided by the 61.8% Fibonacci retracement of its bullish ascent from June 25 to October 01 as well as its uptrend support line connecting the June and October swing lows. Worth noting, however, is how month-end rebalancing could be skewing Thursday’s price action.

If the US Dollar can cling onto its 200-DMA and 61.8% Fib level, the greenback may still face an uphill battle with resistance from its mid-point retracement of the aforementioned bullish leg, 50-DMA and bearish trendline extended from the series of lower highs throughout October. That said, USD selling pressure could accelerate if the US Dollar fails to keep its head above the October 18 low near 97.15. Below this level, the DXY US Dollar Index could quickly edge lower to test technical support potentially provided by its 78.6% Fibonacci retracement. 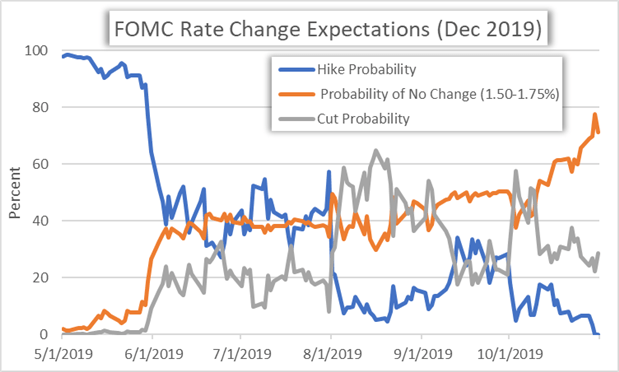 The US Dollar overwhelmingly stands to be impacted by the upcoming US jobs report due for release Friday at 12:30 GMT considering the Federal Reserve’s dual-mandate of maximum employment. Despite the latest FOMC statement accompanying its third straight 0.25% interest rate cut including firmer language than previously communicated with the central bank removing verbiage on its ‘willingness to act as appropriate to sustain the expansion,’ Fed Chair Powell quickly put that idea to rest during the follow-up press conference.

Powell conveyed the Fed ‘will act as appropriate’ nonetheless but added that the current policy will remain appropriate if outlook does not change substantially. In other words, a material deterioration in economic data from current levels – particularly regarding nonfarm payrolls – could force the Fed to cut rates even deeper.

Also, worth watching is the US Treasury Yield Curve (I prefer to watch the 10-year and 2-year spread) due to its potential use as a recession indicator. While a jump in Fed rate cut bets likely stands as a bearish headwind for the US Dollar, a major miss on the ISM Manufacturing PMI report, which is expected to rebound from its deeper slide into contraction territory, could cause the 2s10s spread to plunge and may warrant greater attention. This is because the US Dollar has potential to rise in this scenario considering the impact a treasury yield curve inversion has on recession fears and the greenback’s posturing as a safe-haven currency.

Ahead of the US jobs report, traders will likely keep close tabs on EUR/USD – the world’s most liquid and heavily traded currency pair – which can still experience outsized moves in response to monthly change in nonfarm payrolls. In fact,spot EUR/USD fluctuates +/- 36 pips on average in response to monthly US employment data, which compares to +/- 4 pips on average otherwise. Consequently, forex traders should expect the NFP Jobs Report to Spark US Dollar Price Action.

Also, USD/JPY comes into focus seeing that the Dollar-Yen is particularly sensitive to changes in interest rate expectations. I recently noted that my USD/JPY price forecast was bearish at the beginning of October with the prospect of more Fed rate cuts on the horizon. This thesis still stands if Friday’s NFP report drastically disappoints as it could cause FOMC rate cut bets for December to surge. On the other hand, robust employment figures would likely reaffirm the Fed’s apparent end to its recent ‘mid-cycle adjustment.’

While volatility around NFP and ISM, another major theme likely contributing to USD price action, which I pointed out in a prior US Dollar Price Volatility Report, is the Fed’s ballooning balance sheet. Powell stated yesterday that he and the FOMC expect Treasury bill purchases to continue into Q2 of next year and also stressed the importance of boosting bank reserves up to $1.5 Trillion. The Fed’s expanding balance sheet – though adamantly professed by Powell not to be confused with QE – provides an influx of liquidity (i.e. supply of US Dollars) and could serve as a major headwind for USD price action.